My friend and colleague, CoH member, and CoH's former Minister for Peace and Justice, Paula Schonauer was published today in Welcome to Our Big Gayborhood.  Read her reflection on the liberating power of the rainbow.  An excerpt:

Physicist W.J. Humphreys stated that the rainbow is a special distribution of colors (produced in a particular way) with reference to a definite point in the eye of the observer. As no single distribution can be the same for two separate points, it follows that two observers do not, and cannot, see the same rainbow. The perception of a rainbow is both a shared and individual experience.

Visit msnbc.com for breaking news, world news, and news about the economy

A more complete article on NewsOK.com.  An excerpt:

When former Gov. George Nigh heard a voice behind him ordering him to "get on the ground and give me your wallet," his first thought was that even late at night, it had to be a neighbor having some fun.

But then the 82-year-old civic leader turned to see a man shoving a gun only inches from his face, and he knew it was no joke.

Contest over the local immigration bill has begun

I can't provide an imbed code, but I can give you this link to a KOCO story about Rep. Mike Christian's plans to introduce legislation in this session to copy and go further than the Arizona law.  He even wants to revoke the citizenships of children born in the state.  The ACLU has mobilized a response.

Former Governor George Nigh and his wife wererobbed at gunpoint in their driveway last night.

Here's some trivia for you.  George Nigh has served four different terms as Governor.  Some of the terms lasted only a few days.  He was also elected to four terms as Lieutenant Governor, first in 1958.  His first term as governor preceded his second term as Lt. Gov.

Nigh is responsible for "Oklahoma!" being our state song.

I commend the Oklahoman onthis piece which describes the trauma already being inflicted upon women by the law that went into effect on Tuesday.  Here are some of the key lines:

The law allows women to avert their eyes.

"It’s like they don’t think women have given serious thought and consideration before they walk through our doors,” Meek said.

It’s really destructive to the physician-patient relationship, . . . "That kind of disregard for a patient’s choices violates principles of medical ethics.”

Exciting things are happening downtown as the streets and parks get a major ($141 million) overhaul, beginning with the Myriad Gardens.

Over the last few years I have enjoyed developing good relationships with leaders in the local Muslim communities.  They have been effective partners on a number of issues from hate crimes to anti-bullying measures to health reform to same-gender marriage.

There has been growing anti-Muslim rhetoric of late, which has deeply concerned me.  It culminated, so far and hopefully finally, with the "We Don't CAIR" rally in March.  CAIR is the acronym for the Council on American-Islamic Relations and an effective local civil rights group with whom I have worked often and well.  Here is a photo of myself and CAIR Executive Director Razi Hashmi taken at an interfaith event. 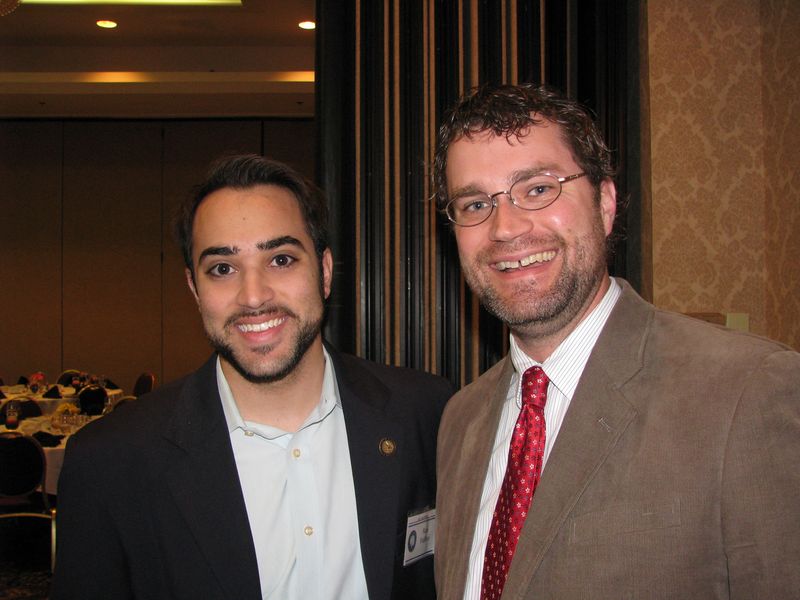 Yesterday's Oklahoma Gazette included a point/counterpoint on CAIR, the local interfaith climate, and Christian-Muslim relations.  The point was written by Mayflower Congregational UCC member Bob Gresham.  The counterpoint was by Reclaiming Oklahoma for Christ founder Paul Blair, who is familiar as a leader of local anti-LGBT efforts as well.

That was our balanced goal: Warn Americans about the threat to our constitutional liberty presented by Islam, while sharing the saving grace of Jesus Christ.

Proclaiming truth is not hateful, and it is not bigotry. It is simply truth.

I'll let you judge who is hateful, and thereby you can determine who speaks truth.

Last year there was much buzz locally when The Killer Inside Me was filming here, mostly in Guthrie.  But the film is generating controversy for its violence, particularly extreme violence against women.  It will be interesting to see how it is handled locally when this film, the most high-profile filmed in Oklahoma since Twister, is released and, I suspect, many Oklahomans will find it objectionable.

the experience has been difficult for some patients. She says some have walked out of the room where ultrasound procedures are performed in tears because of what they had to hear. She says no patients have canceled an abortion.