Travelling for an abortion

Linda Greenhouse writes about a recent European Court ruling and the possible future in the United States for reproductive choice.

Obviously, not all states would choose to join the anti-abortion bandwagon, even if they had the Supreme Court’s permission. California, New York, the District of Columbia, Connecticut and Massachusetts (once two of the most anti-abortion states, but times change) would remain places of refuge for desperate women, Englands to the Irelands that are Wyoming (which has no abortion provider), the Dakotas, or the Deep South, where a shrinking handful of doctors provide abortions in a hostile regulatory climate. More than a third of all women live in counties without an abortion provider, and that number is growing. Long-distance travel is made more onerous in the half of the states that require 24-hour waiting periods after “counseling,” necessitating two trips or an overnight stay.

Fun, philosophical reflections from Alva Noe, who insists on love as a form of perception and hard work at that.  An excerpt:

Love, in a similar way, is an achieved openness. Love, I think, is a sustained openness to another person. It's hard to learn to read; in general, although we never notice this, it is very heard to learn to see. The purpose of education is to teach us how to see. It is very hard to be able to see another person. To see someone you must know him or her. Sometimes we just cannot see what is there before us!

Arianna Huffington writes about the incredible economic success in Brazil, how it signals the false dichotomy between 20th century definitions of left v. right, and how America is getting it wrong.  An excerpt:

According to a study coordinated by Marcelo Neri, who heads the Center for Social Policies at the Getulio Vargas Foundation, between 2001 and 2009, the per capita income of the richest 10 percent of Brazilians grew 1.5 percent per year while the income of the poorest 10 percent grew 6.8 percent. "The most surprising aspect of the data," Neri told me when we had dinner Sunday night, "is that the historically most deprived groups, including blacks and those living in the northern parts of Brazil, have experienced the highest income growth."

Among the other greatest hits presided over by Lula: Wages have gone up more than 5 percent during his two terms; unemployment was cut in half; young people are staying in school longer; the inflation rate went from 12.5 percent a year to 5.6 percent; exports have more than tripled; and Brazil now has the eighth-largest economy in the world and is on track to grow 7.5 percent this year.

Kauffman begins applying the quantum work to the mind

But first he reviews how classical mechanics has trapped us in our current dominant view of the mind.  Russell, no surprise, is one of the villains.  Read on.

These posts very strongly suggests that the mind brain system NEED NOT be an algorithmic classical computer at all. I strongly suspect that our mind-brain system is one or many coupled Trans-Turing Systems.

A sad report.  I guess I will continue to boycott.

A nice little op-ed in today's NYTimes places the issue with a 65 year historical context, not just the last 17 years of the policy.

Today's Gospel lesson is a scandal for us. It is a strange story for us to tell; an odd message to proclaim – "The child engendered in her came from the holy spirit."

Does it help us if we understand the passage in Isaiah better? In its historical context, Judah is besieged and the unrighteous King Ahaz seems intent on making an alliance with a foreign power, an alliance that might bring ruin upon the people. Instead he is asked to trust in God, but Ahaz refuses. God offers a sign anyway. The sign, if you read the passage closely, is not the pregnant girl, it is the name given to the baby – "God with us," Immanuel.

Does it help if we realize the young girl in Isaiah wasn't a virgin, was probably already pregnant, that Isaiah probably pointed to some young woman who was present there? That the word was translated as "virgin" by the Greek Septuagint and therefore entered our collective memories? And that most scholars of the Hebrew believe "young woman" to be a more appropriate translation?

Is the scandal momentarily alleviated if we get a better grasp of how and why Matthew used this Isaiah story and others like it in telling the Jesus story? That he wanted to connect this remarkable life he had witnessed with the grand story of God at work with God's people?

Or that he wanted to challenge the master narrative of the Roman Empire? For Rome also claimed a divine conception. Caesar Augustus was said to be the child of Apollo, the God of Light. Matthew is subversively claiming that the Son of God is not the Emperor, but is, instead, the child of Bethlehem.

Does any of that make this story any less scandalous, any less controversial, any easier to grasp?

Because if this story is anything less than a mystery which challenges our thinking, then it is not good news in which we can rejoice.

It would be of little value for me that 'the Word was made flesh' for man in Christ as a person distinct from me, unless he was also made flesh for me personally so that I too might be God's son.

Going back to St. Irenaeus in the second century the Christian doctrine of the incarnation has been expressed in the phrase "God became human so that humanity might become God."

God's reign has invaded this world. That's the deep theological truth behind the story which Matthew tells.

God's reign has invaded this world. The heavens have been ripped open and God's Spirit has been set loose, renewing creation. The divine image in each of us is alight with the true Light of the World, Jesus Christ. Our humanity is awakened. We now are able to achieve our full potential as human beings. It doesn't matter who you are or where you are on life's journey, you have received the right and the power to become a child of God. You are the adopted sons and daughters of the Most High.

God's reign has invaded this world and creation can now become what God has always hoped and dreamed that it would be. The unity of all creation is on its way.

God is the power for the future, the consummation of human history. And where do we find God? Not on Caesar's throne. Not in the presidential palace. Not in the corporate office. Not in the university lecture hall or the science lab or the surgery.

No, Matthew tells us, God's spirit is found at work in a Jewish peasant girl. In the scandalous child she is about to birth. In an ordinary carpenter, from an ordinary village, in a part of the world that you might have otherwise overlooked.

Caesar's throne, the presidential palace, the corporate office, the university lecture hall, the science lab, and the surgery, for all their positive benefits to humankind, are not ultimately what will transform creation. They are not the source of justice, love, peace, and hope. They are not the end of the story, the consummation of human history. They are not the sign you have been looking for.

Then let us rejoice! Because it means that God can be with us. Is with us. In us. The divine image in each of us awakened. The Christ born anew in each of us.

Joy to the world, our Sovereign is coming 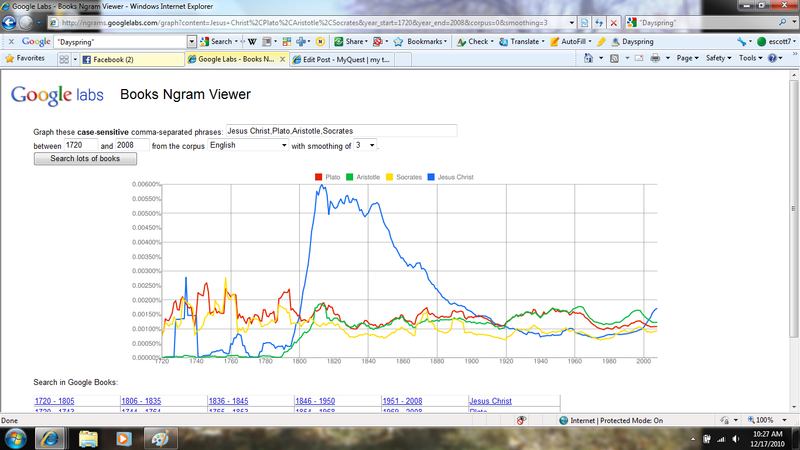 Interesting to see how Niebuhr and Tillich peak and wane while Barth peaks much later than you would expect and Bonhoeffer (as seemed to be the case) has continued to build influence. 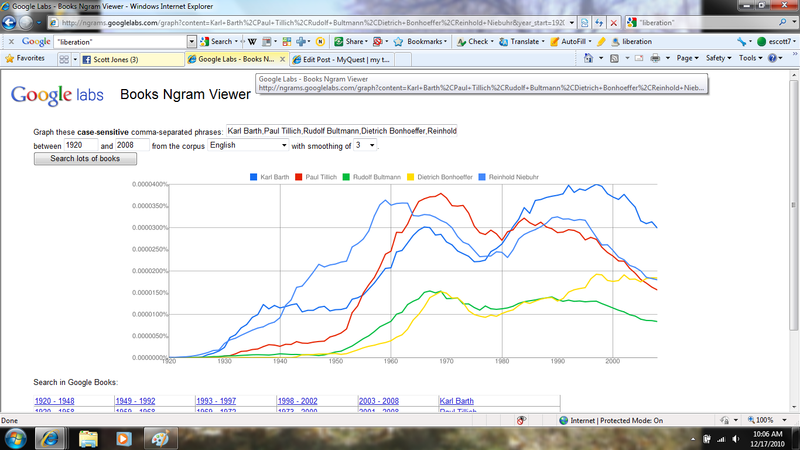