I am reading Ernest Hemingway's A Moveable Feast.  More on that later, when I finish it.

I just read the chapter on Scott Fitzgerald (my namesake).  Interesting stories of Fitzgerald's alcoholism.

But in the midst of it is a line of Hemingway's that deeply resonates with me:

and I felt the death loneliness that comes at the end of every day that is wasted in your life.

Since Dad died at 41 when I was 16 I have deeply felt the loss and, especially the waste, of time.  I want to get the task accomplished, the goal achieved (which does compete with my procrastinating original nature).  More importantly thought (and became so during a depressive period in the late-90's) the need each day to experience something.

This neurosis has both good and bad effects, obviously.

When I came out an irony hit me like a sledgehammer (and probably kept me in the closet) -- having children and a family, the thing I most wanted out of life, would not come easily and would probably come late.  It keeps getting later.  If I dwelt on that, it would depress, and/or anger, me.

Here's a photo of me with Fitzgerald, which really has nothing to do with this post: 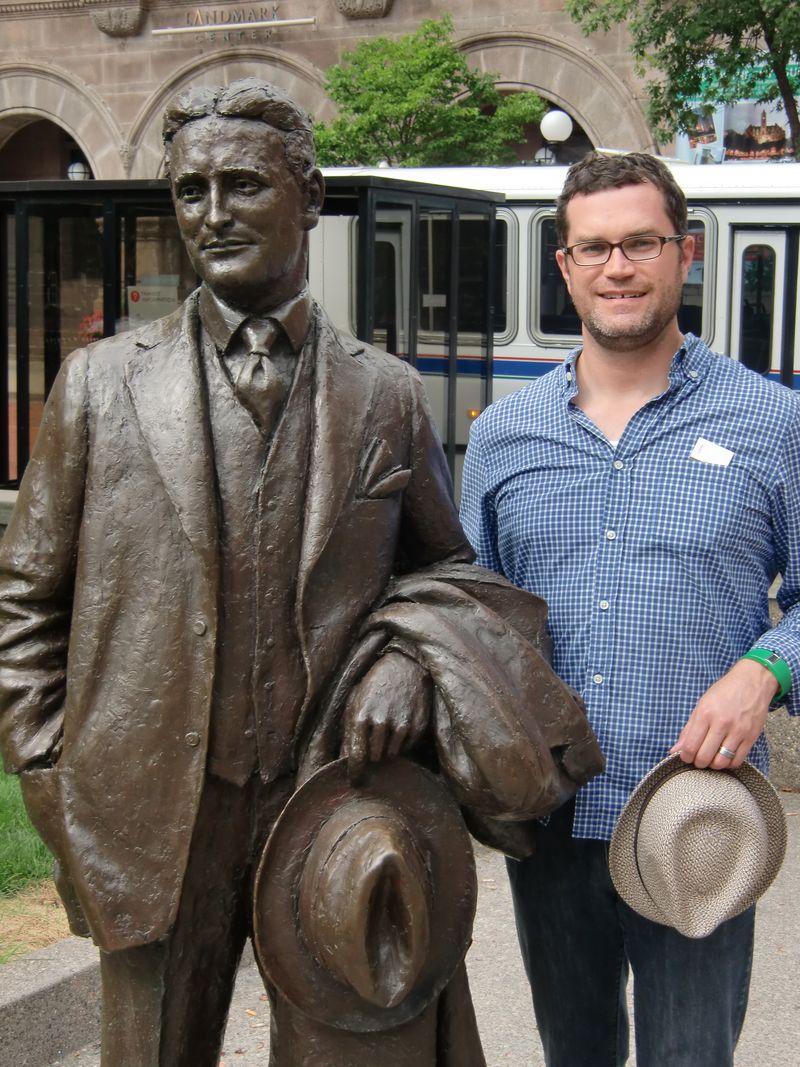 The skies were bright blue today, and mostly clear of clouds.  The sun was warm, the air cool.  It was a perfect early-autumn day.  Not to be wasted, for sure.

After morning errands, I drove out along I-80 across the Platte River, to visit the Wildlife Safari for the first time.  As zoo members, we get a dollar off!

Not as extensive as Arbuckle Wilderness or that place my family always went outside Springfield, Missouri, this location is owned by the zoo and focuses on native North American animals, particularly those too large for great habitats at the zoo in town.

My favourites today were the elk.  The elk meadow is the first one you pass through, and there were a number of males in it.  They were moving about and every now and then one would hauntingly call.  It was magnificent. 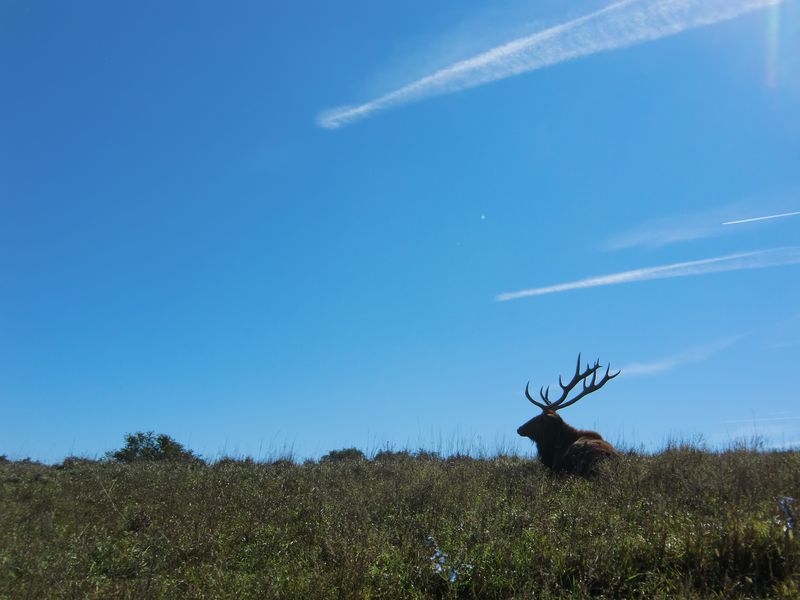 In the wetland portion, the pelicans were on parade. 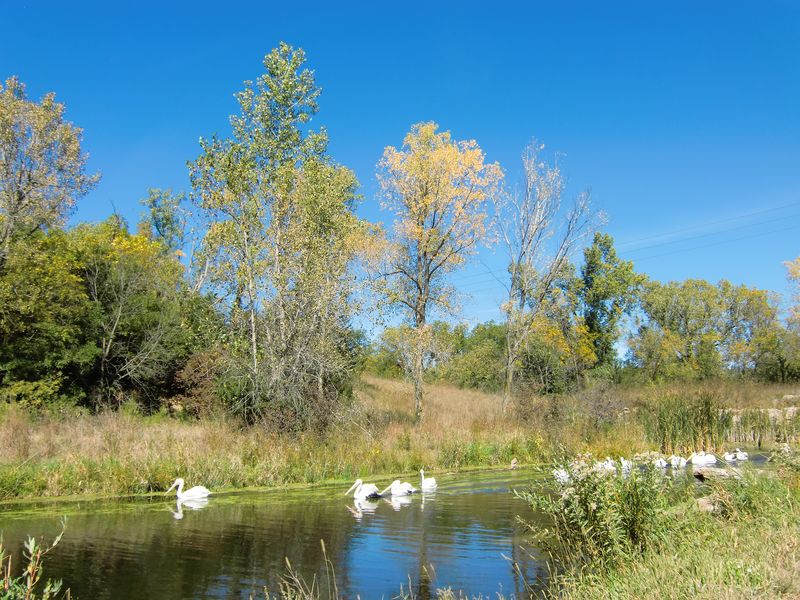 Only one black bear was visible, and that was from the backside asleep.  No wolves appeared.  I felt not only disappointed but somehow entitled to see wolves, for some reason.  Trying to explain my odd feeling, I humourously justified it by claiming my Native American ancestry.

Hiking, with the sun warming me, the breeze smelled like home.  It has been strange to discover that smells which I associated with Oklahoma are, actually, more broadly smells of the prairies and central plains.  Today felt like hiking at Roman Nose State Park.

At times I felt like I was in Jurassic Park, driving along looking for the animals in the woods. 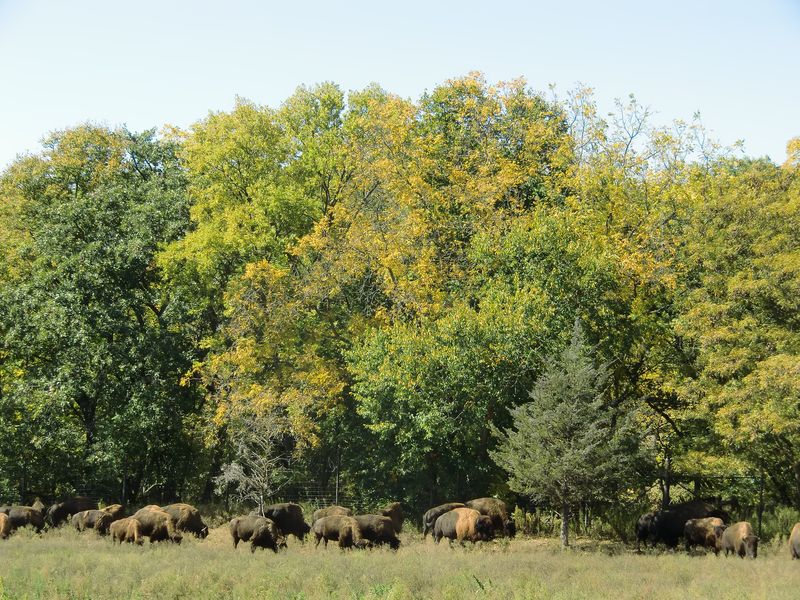 I was looking forward to seeing bison.  Seeing bison is not a rare experience, especially in Oklahoma.  And we have such great places to see them, particularly the Wichita Mountains National Wildlife Refuge (I never made it to the Tallgrass Prairie Preserve in Osage County; I hear it is great to camp there and that sometimes the bison will mill around your campsite).

Today the herd were moving along the treeline together, and I sat watching for a good little while.  The two white bison surprised me. 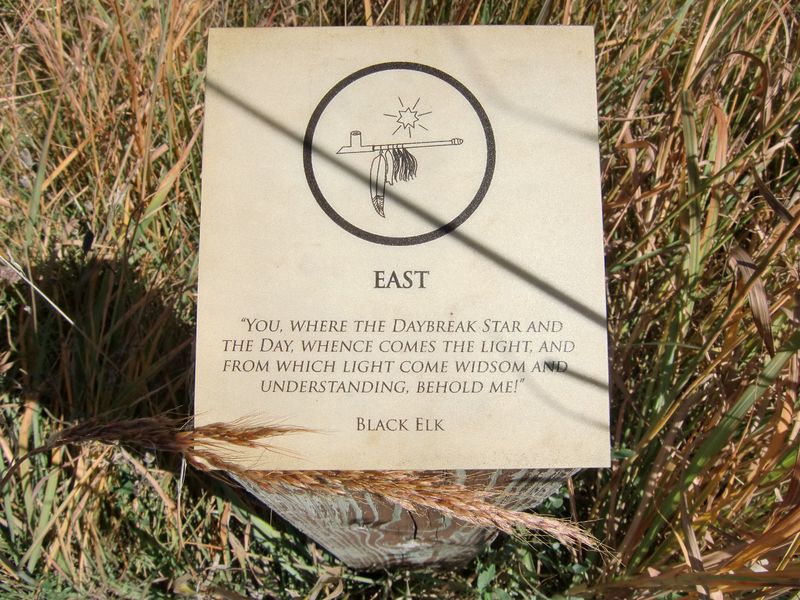 At the visitors center there was a garden designed as a sacred hoop based on a design of Black Elk's, it seemed.  That fascinated me.  I ended up finally buying Black Elk Speaks before the day was out. 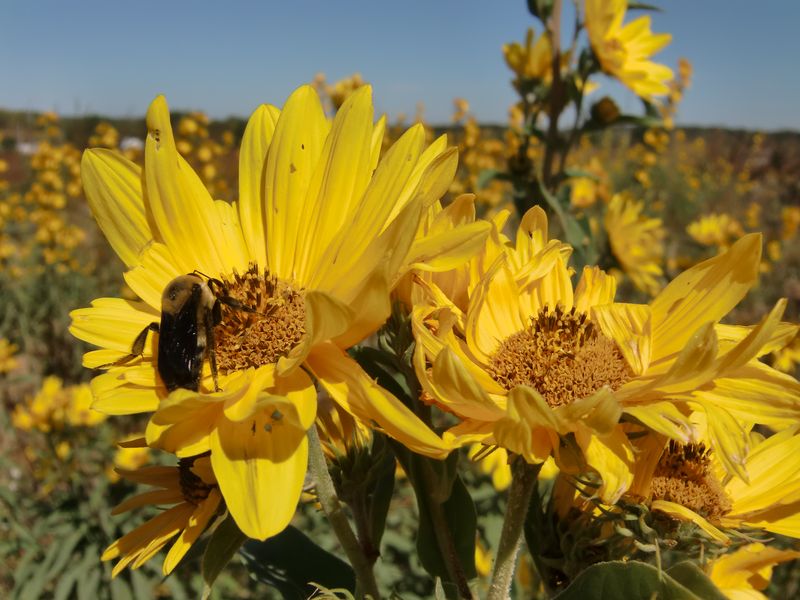 Billy Budd and Other Tales by Herman Melville
My rating: 4 of 5 stars

I read Billy Budd in 2006 and read Bartleby the Scrivener sometime later. This time I read all the remaining tales in this volume, most of them from the Piazza Tales.

I wrote the other day on my blog about The Lightning-Rod Man. That was my favourite of the bunch. Some of the stories aren't as strong or engaging, but even they express Melville's command of the language and the sense of dread and the exotic which overhangs everything. Plus, they keep your interest.

Why our time-logic must change

Adam Frank continues his blog series on the problems with our contemporary time-logic, by discussing the two main reasons it should change.

I find it interesing how the news story still seems to be that there is an Arab revolt against dictatorship, rather than the more obvious, broader story that people worldwide are rebelling against the status quo.  It is probably easier for Americans to digest the one story than the other, but that doesn't change reality.

The NYTimes today did discuss the revolts and protests as a worldwide movement, that now includes on-going protests in Wall Street.  Some observations from the article:

They are taking to the streets, in part, because they have little faith in the ballot box.

“Our parents are grateful because they’re voting,” said Marta Solanas, 27, referring to older Spaniards’ decades spent under the Franco dictatorship. “We’re the first generation to say that voting is worthless.”

Economics have been one driving force, with growingincome inequality, high unemployment and recession-driven cuts in social spending breeding widespread malaise. Alienation runs especially deep in Europe, with boycotts and strikes that, in London and Athens, erupted into violence.

But even in India and Israel, where growth remains robust, protesters say they so distrust their country’s political class and its pandering to established interest groups that they feel only an assault on the system itself can bring about real change.

Change by Design: How Design Thinking Transforms Organizations and Inspires Innovation by Tim Brown
My rating: 4 of 5 stars

Brad Milton, a church member who is an architect, gave me this book last year as the church began implementing a new governance structure. I didn't read it at the time and only recently started reading it. And like a book does every now and then, such as Jane McGonigal's Reality is Broken, it gave me incredible insight into church planning and ministry, despite not being anything directly related to church.

Brown is concerned with teaching businesses and organizations to make better use of design thinking. A key element of that is that everything is an experience, and an experience for a personal relationship. As I had begun reading this, the Faith and Leadership blog from Duke University had a bunch of posts, some from L. Gregory Jones, on design-thinking and the church. It was serendipity.

I have begun using some of the language and processes from the book. We discussed some ideas as staff meeting yesterday, and I scanned and forwarded some pages to the church council for tonight's meeting.

I'm currently reading some Herman Melville short stories, including, last night, the one titled the same as this post -- "The Lightning-Rod Man."  I think I saw a televised version of this story once as a kid, but didn't know it to be Melvilles, though I hope I'm not just confusing it with the film version of Ray Bradbury's Something Wicked This Way Comes.

In this very short story, a powerful thunderstorm is raging in some northeastern mountains.  The main character of the story is enjoying the sublimity of the moment.  Knowing Melville, there is some irony intended here -- he is both presenting this typical American character (like us plainsmen who go outside during a tornado) and mocking it.

In the midst of his aesthetic experience, a soaked stranger comes to the door bearing a fascinatingly exotic lightning-rod.  The homeowner calls the character Jupiter.  The lightning-rod man proceeds to scold the homeowner for standing near the hearth, near the walls, for touching metal during a storm and for blasphemously calling him a pagan god.  In overwrought language he attempts to frighten the homeowner and to sell his implement.

This character is fascinating.  At once imminently practical sounding, and some mix of superstition and science, he is also some version of a frontier prophet and evangelist.  Surely more than one American type is present here as well.

What fascinates about this little story is how many layers of irony and interpretation are possible.  Bloom's criticism is really beginning to school me in reading things better!

At the conclusion of the story, the homeowner casts out the salesman and proclaims:

You pretended envoy extraordinary and minister plenipotentiary to and from Jupiter Tonans.  . . . you mere man who come here to put you and your pipestem between clay and sky, do you think that because you can strike a bit of green light from the Leyden jar that you can thoroughly avert the supernal bolt?   Your rod rusts, or breaks, and where are you?  Who has empowered you, you Tetzel, to peddle round your indulgences from divine ordinations?  The hairs of our heads are numbered, and the days of our lives.  In thunder as in sunshine, I stand at ease in the hands of my God.  False negotiator, away!  See, the scroll of the storm is rolled back; the house is unharmed; and in the blue heavens I read in the rainbow that the Deity will not, of purpose, make war on man's earth.

A fascinating speech, full of possibilities.

Now, my edition has some critical notes from some scholar.  Here's what he writes about this concluding speech:

But this story has a subsurface meaning.  Melville is satirizing ministers of the Calvinist persuasion who preach hell-fire and damnation while at the same time they exhort their congregations to buy a lightning rod (conversion to Christianity) in order to escape God's wrath.  The narrator's (and Melville's) position is stated at the end of the story [in the speech just quoted].

Yes, Melville is critical of the Calvinist preacher -- that's clear from other places in his body of work.  But I don't think that the critic is correct that the narrator, the homeowner, represents Melville's own view.  I don't know for certain what Melville's own view of religion and God are.  I've read such widely different, yet convincing, arguments from various scholars and critics, including some as eminent themselves as John Updike.

In fact, I think there are some more ironies that this critic misses and more layers of meaning possible in interpreting the story.  It is possible that Melville thinks the lightning-rod man correct in his vision of a world doomed to destructive forces; this would make the homeowner naive.  It is possible that Melville accepted the pessimistic worldview of the Calvinists, but rejected (as I think one must) that their deity is worthy of worship.  Their deity is a brute -- the white whale, for instance, with is "predestinating head" that batters ships at sea.  One can, then, accept the Calvinist worldview, reject the worshipfulness of that deity, and, therefore, end a nihilist.  This may be Melville.

I do think that the homeowners view of the deity, whether it be some stoic deistic view or some sensitive love-centered view is not clear to tell, but likely the first, is also being mocked by Melville.

Recenlty in the book All Things Shining it has been proposed that Melville was proposing some sort of return to a polytheistic value system.  The appearance of the pagan god in this story is interesting.  Does it hint to support of this view?  Does this story suggest value in multiple different perspectives of deity and meaning?  Or that many exist and are mutually unreconcilable?

I don't know.  That's what makes this short story so much fun!

Here's one voice that thinks not.