In this analysis of the Cardinal's outrageous remarks the actual facts of the episode make them even more outrageous.  The paper is more restrained in its criticism than I am, but it makes it quite clear that it finds the remarks indefensible and irrational.

What follows are some excerpts from James McClendon's Biography as Theology.

Fundamentalism is not easy to define, but a part of its (evil) genius is that it seeks to recover a past that never was, and turns the mysteries of faith into literalistic absurdities.

On atonement for now (emphasis mine):

That Jesus died by crucifixion in first-century Palestine is as well established as any fact in his disputed life history.  That his first-century followers testified to having been redeemed by him, and particularly by his death and resurrection, is an even better documented historical fact.  The issue is whether these facts are to be seen as mere antiquities, like the facts taht Caesar crossed the Rubicon and was subsequently hailed as Emperor by the Romans, or whether the Christian facts just cited are to be seen in vital developing continuity with the living witness of persons of our own time.  If the latter is true, we must hold that these lives tell us that the redemptive reality is not a mere phenomenon of the historical past, but is a significant way of life today.  Of course, the mere existence of such testimony does not settle the issue -- our witnesses just might be themselves deceived concerning Christian truth, or we might have misunderstood what their lives are really saying to us.  The existence of their witness, however, makes Christian atonement a real issue, a live option, and confronts us with that issue here and now.

On the difference between Jesus and Christ:

On the historical Jesus and Christian theology:

[After writing about the skepticism that arises due to historical research into Jesus and the very little material that we might assign as authentic to Jesus himself, McClendon writes:]  We know where he stood; we may be permitted to know where we stand with respect to him.  And that is what matters for Christian theology.

On the incarnation (emphasis his):

To be sure, Jesus is the Christ; that is to say, there is a moment in the economy of redemption when everything God is doing and will do is invested in that one life.

Biography as Theology: How Life Stories Can Remake Today's Theology by James William McClendon
My rating: 4 of 5 stars

Looking for the follow-up to William James' Varieties of Religious Experience and a book that speaks more directly to and from a Christian theological perspective, then this is the book.

James McClendon has been my favourite theologian for most of the last decade, since I began to read his three volume systematic theology. Those volumes were essential in refining my theology as a full-time practitioner of parish ministry. I had intended for some time to read this early volume and am glad to finally get to it.

First published in the seventies (I read an early nineties edition), this was one of the first works of narrative theology and argued that theological content could be derived from studying the lives of people. He examines Dag Hammarskjold, Martin Luther King, Jr., Clarence Jordan, and Charles Ives. In his systematic theology he covered a handful of other folk, including Dorothy Day, Dietrich Bonhoeffer, Ludwig Wittgenstein, and more.

One feature of this book is that he calls for a revision of the church's doctrine of the atonement based upon how these persons embodied atonement in their lives. I had not realized the book would cover the atonement -- I'm preparing for a class on the atonement in 2012. His approach is radically different from that of Weaver and other recent revisionists of the doctrine. He focuses on atonement as embodied in efforts to create unity across race, class, etc.

The chapter I most enjoyed was that on Charles Ives, the composer. It not only reveals McClendon's biographical approach, but another feature of his work that I really enjoy -- theology of the arts. In his systematic theology there is a wonderful theological exploration of the Hudson River school of painting and a discussion of Melville, among others. Here he develops Ives' theology of music. It is quite enjoyable. The discussion of New England Congregationalist camp meetings made me wonder how we could re-invent this tradition of ours for the 21st century.

McClendon follows James in that the doctrines that matter are those which can be embodied -- those convictions that give shape to a life. This is a very different approach than theology has taken throughout its history. The radical revision McClendon proposes has yet to fully develop or come into its deepest influence (I hope he becomes even more influential).

A few years ago I first read the concerns that some have that the rapid growth rates of Christianity and Islam in Africa could spark a religious war in the 21st century.  Particular concern focused on Nigeria which is split almost evenly between the two major religions.

On Sunday morning when news spread of the attacks on Christian churches, I was alarmed and wonder if this will be limited violence or the harbinger of something to come?

Our adventure was to leave the nice, safe trail where Mummum and Michael were, scamper down a retaining wall, and walk across the rocky beach to the water to throw rocks.  We also climbed and walked on fallen tree trunks.  There was lots of giggling. 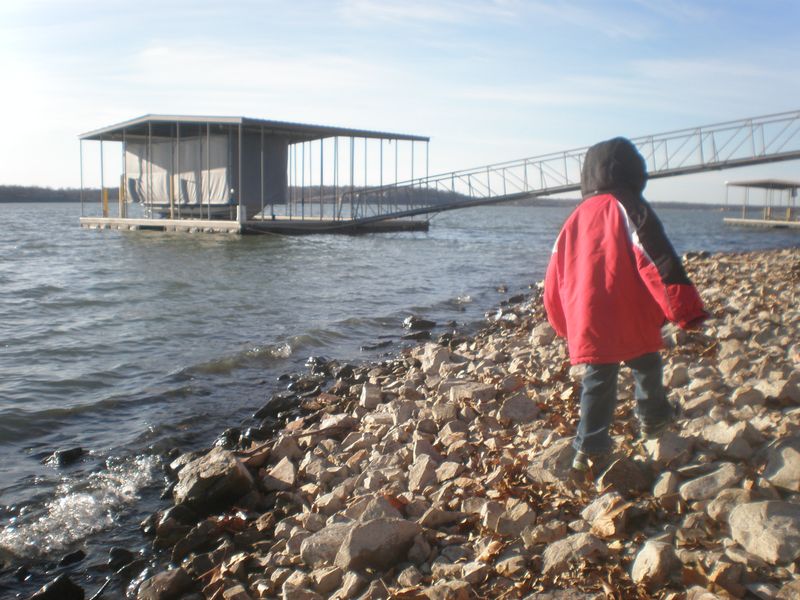 On the fourth day of Christmas, we had driven from Michael's parents to mine for a couple of days.  They were also hosting my nephew Jacob.  The day was spent playing with Jacob and answering his questions.

He is in question mode.  Why do worms live in the dirt?  Why does the earth move around the sun?  Who created God?  Etc., etc.  It was fun.  I love answering questions like this -- I asked them as a kid.  Some people get pestered or exhausted by the questions, I don't.  Always answer honestly and as fully as one is capable of answering.  Don't dumb it down or give silly answers, but try to communicate in concepts that the child can understand.  Everyone kept saying, "Save those questions for Uncle Scotty." 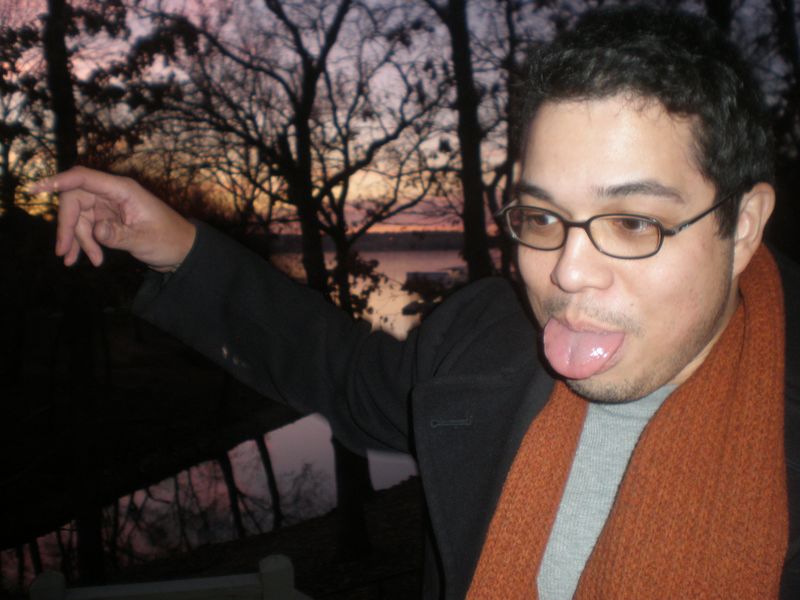 Over the course of the couple of days together I decided that I should write a children's book based on our conversations over the weekend.  That then sent me to thinking about a bunch of different children's books I could write. It was warm enough to grill steaks outside for dinner.  We spent a lot of time out on the deck, which is unusual for Christmas.  After dinner we drove around and looked at Christmas lights.  I was disappointed to learn that the Playport Resort, which used to have a magnificent Christmas light display, doesn't anymore. 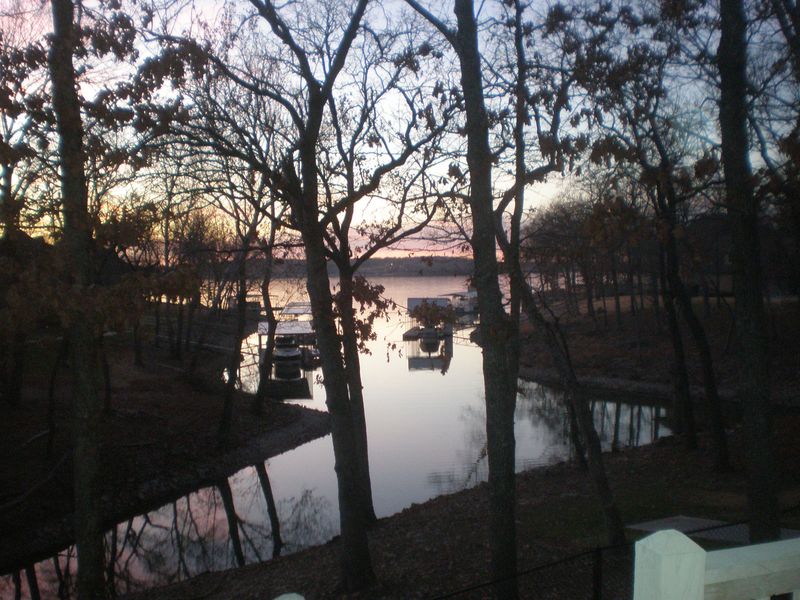 It has become my custom in the last half-decade or so to buy myself books after Christmas.  Based on end-of-the-year best-of lists and recommendations from friends, I buy a few books at Full Circle Books (I'm still collecting and filling up the cards that turned in give you a $30 value; I filled another one up this week, so will look forward to cashing it in, though it will be months from now).  This year I selected The Sense of an Ending by Julian Barnes, 1Q84 by Haruki Murakami, The Night Circus by Erin Morgenstern, and The Marriage Plot by Jeffrey Eugenides.  This annual tradition is one of my favourite things to do during Christmastide and was one of the highlights of the third day of Christmas this year.  And we ran into Kristen McCarty at Full Circle. 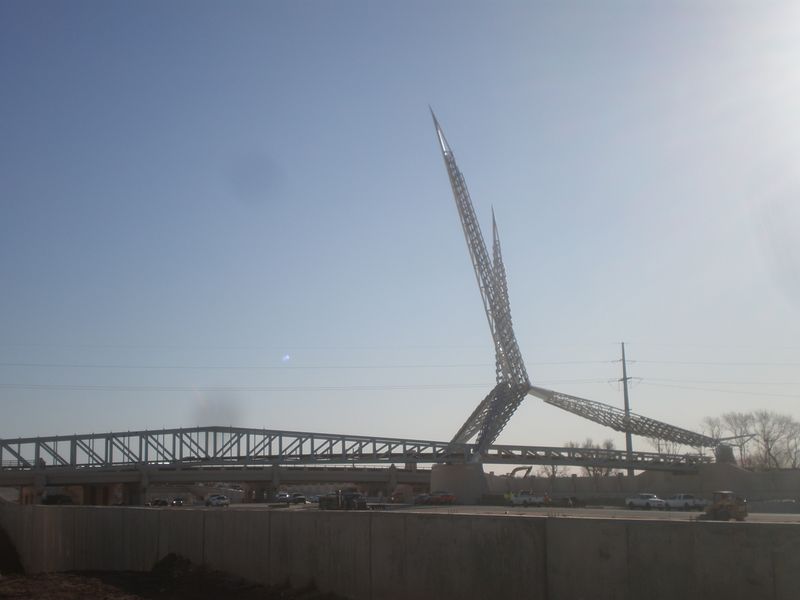 Driving over to Full Circle, we went through the medical campus to see the new OMRF building and then down to see the new I-40 pedestrian bridge and back through downtown.  After Full Circle we made a much needed visit to Big Truck Tacos and lunch with Rob Howard and Tarae McDonald.  If you have still not eaten at Big Truck despite all my many writings about it, then you are missing out.  And this even goes for those of you who don't live in or around OKC.

In the afternoon I met up with Mekado Murphy (in visiting from New York City) and Doug Bradley at Sara Sara Cupcakes.  I had an unused gift card to use there.  When I handed it to the checker she said, "This is old."  My favourite thing about Sara Sara is the milk bar.  You get a frosted mug and have all-you-can-drink white, chocolate, and strawberry milk.  Oh, I had a coconut cream cupcake.

Mekado brought us up-to-date on films and told about his interview with Steven Spielberg.  We discussed politics and religion and our views of the future.  Doug asked me what I was most concerned about in 2012, and I said that we would continue to settle for mediocrity.  I also informed them that despite always being an optimist, I am not optimistic anymore and think that life will get more difficult than it has been or that I've planned for it to be.  At the same time, I said that this is an exciting and adventurous time to be in parish ministry, pastoring through all the cultural challenges. 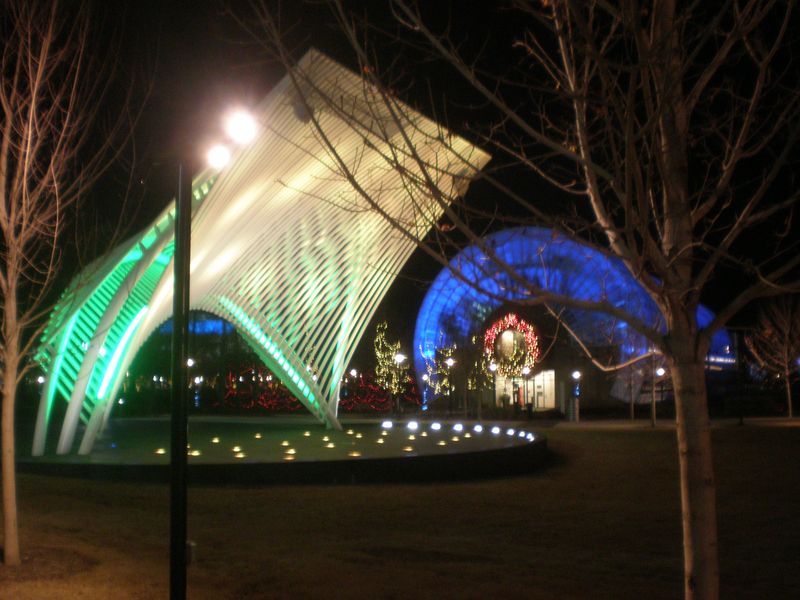 After dinner Michael and I walked around the Myriad Gardens at night enjoying all the new lights. 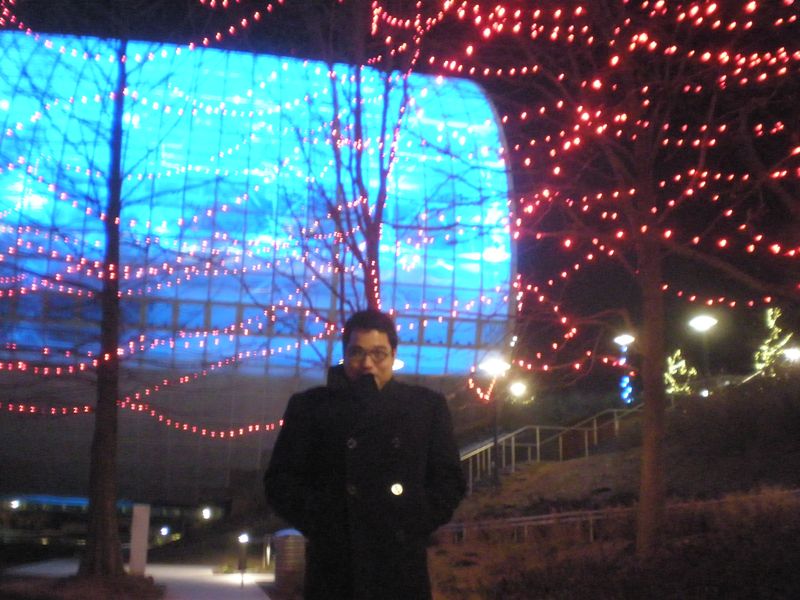 We spent the rest of the evening with his parents, and I finished the Julian Barnes novel I had purchased that morning! 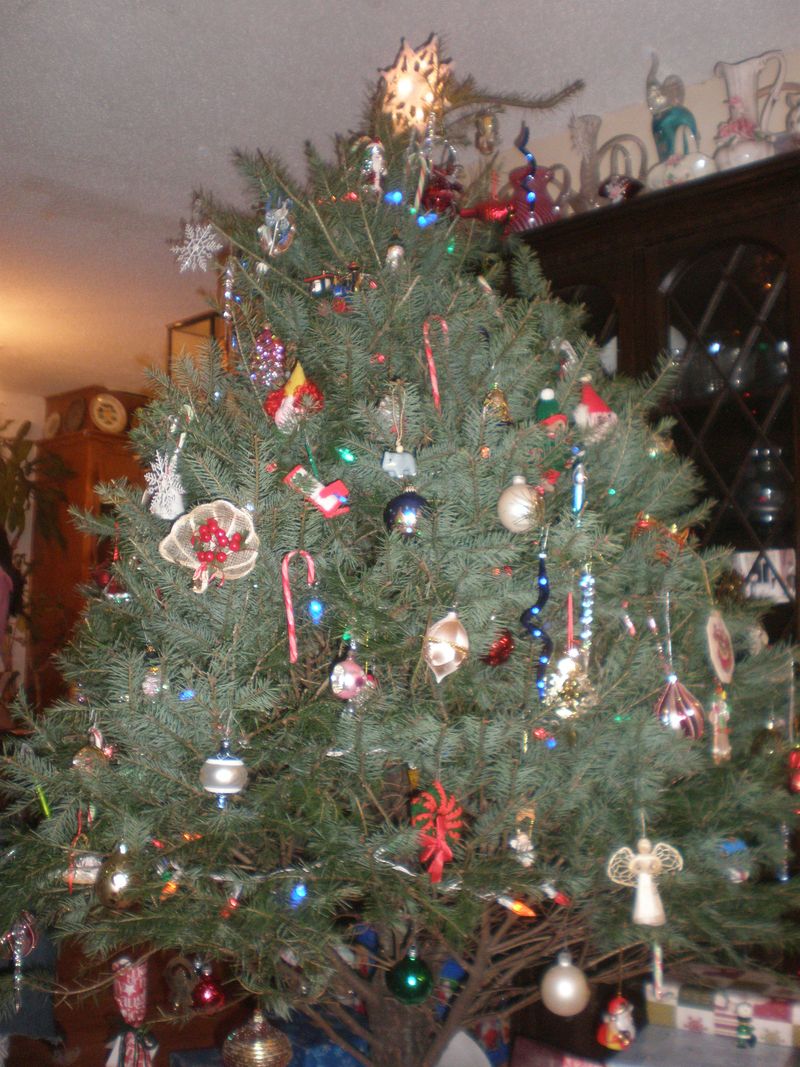 The most awkward moment on the second day of Christmas came when my mother-in-law decided to call my brother-in-law Robert (who was not present and in California with his girlfriend) to ask him a question from the dinner table with all of us sitting there. 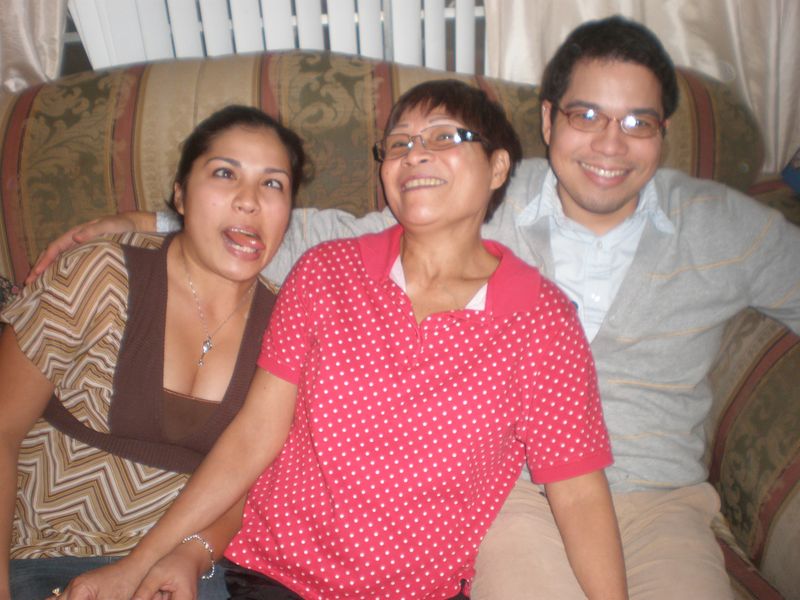 The second day of Christmas was spent with the Ciches.  We breakfasted at Jimmy's Egg, ran to the grocery store a couple of times, Michael and I had to go get the sweet rice from its baker, and otherwise we sat around the house reading, talking, and watching the original Planet of the Apes.

Because it was so warm Gerry grilled steaks.  Not your normal Christmas dinner!

The 1st Day of Christmas

It was so warm loading the car on Christmas morning that I did not wear a coat.  Much different from the snowy landscape we drove through last year.  In York, Nebraska we saw Santa Claus at the Petro stop.  He must have been heading back toward the North Pole from his exhausting evening. 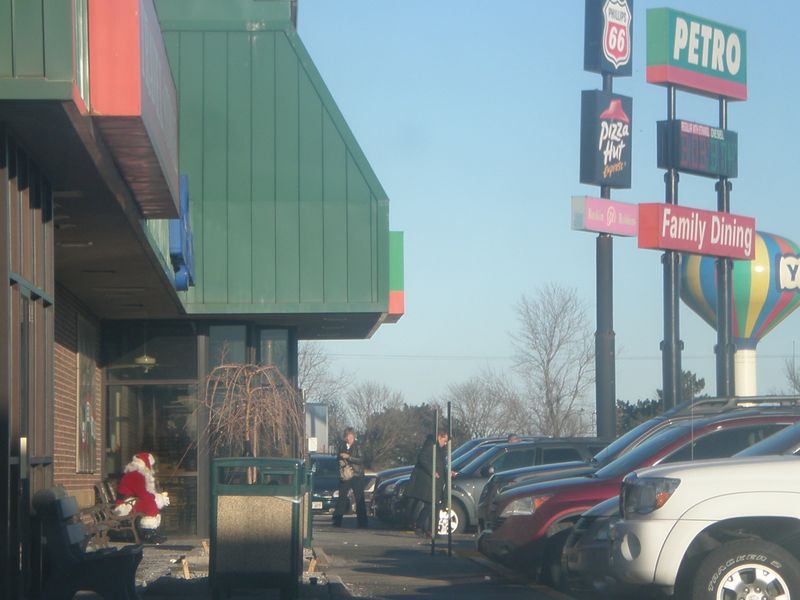 There was a snowy landscape for a brief while in central Kansas.  The familiar Oklahoma landscape was welcoming.  Perry now has a Panda Express, we noted.

It was 3 o'clock when we finally pulled into Kelli & Shawn's house and Jacob and Mom ran out to greet us. 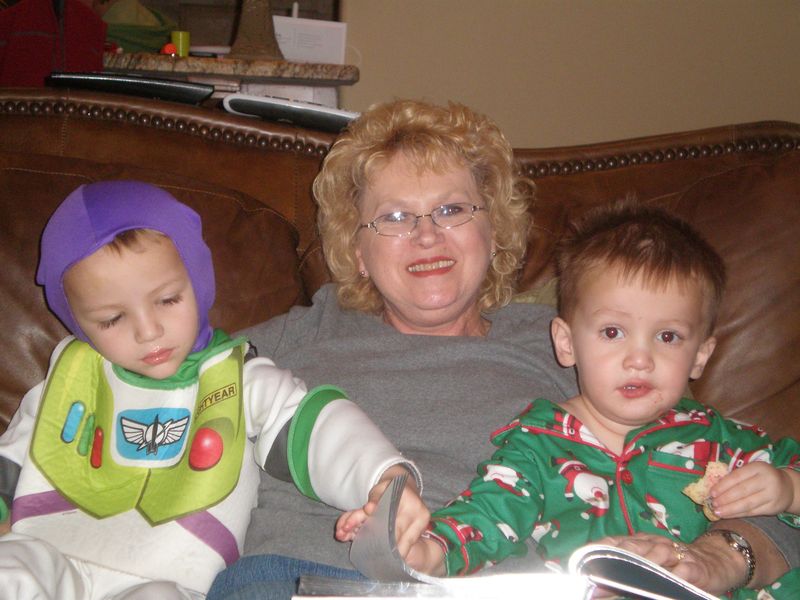 The big gift for the boys this year was golf clubs from grandma.  They enjoyed the Hungry Hungry Hippo we gave Connor.  He kept beating everyone else. 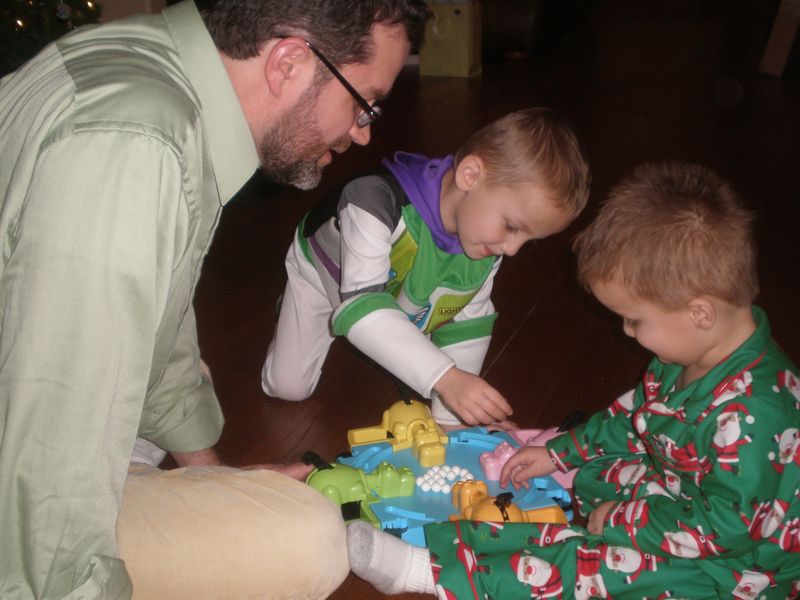 After dinner and some visiting and game playing, we drove to Spencer and Michael's parents.

If you are into that sort of thing.