Brief history of life on earth 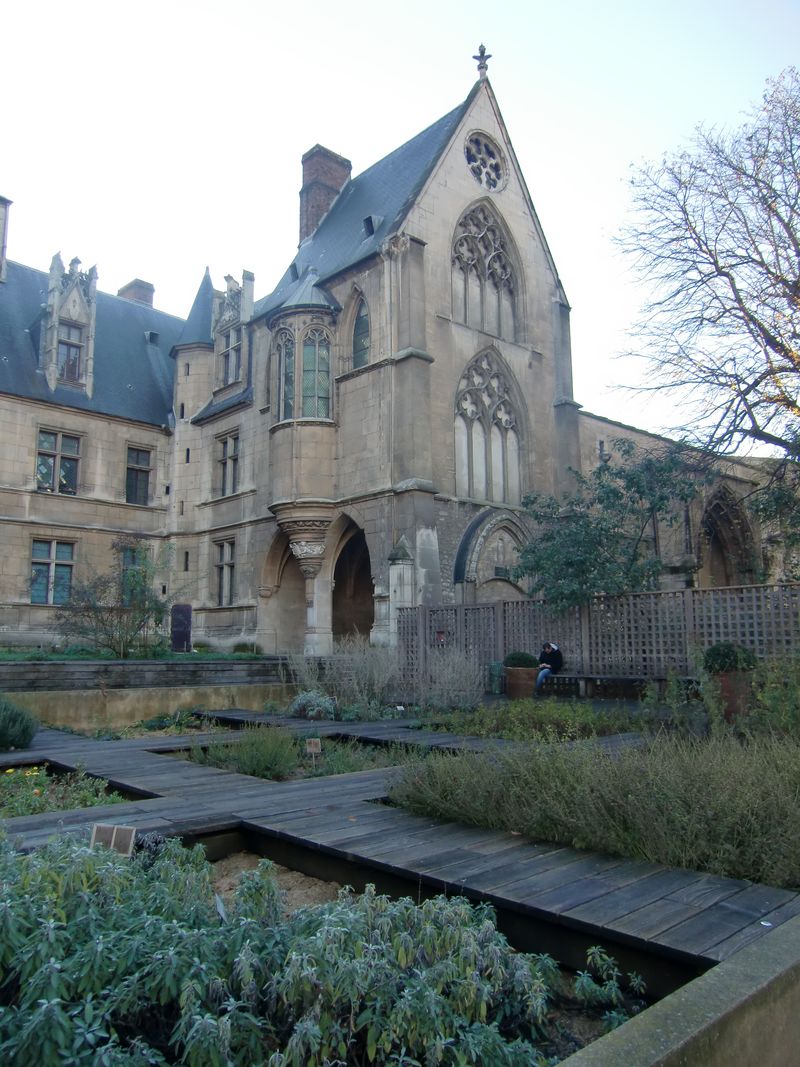 Room 14, on the second floor of the Musee de Cluny, and described in the guidebook as "Room of Paintings and Sculptures from the Late Middle Ages" was revelatory.  The guidebook said, "The sheer diversity of the materials, forms and themes of 14th and 15th century sculpture is amply illustrated in this room."

I have never seen medieval sculpture like what I saw there.  Nothing of that caliber either in skilled execution or in conveying emotion.  Normally medieval work appears flat, but these were fully developed characters.  There were also a number of figures displaying joy or delight, moreso than what one recollects of most medieval sculpture.  [Note: I didn't take pictures of much of it.  Not sure it would have been well-captured.] 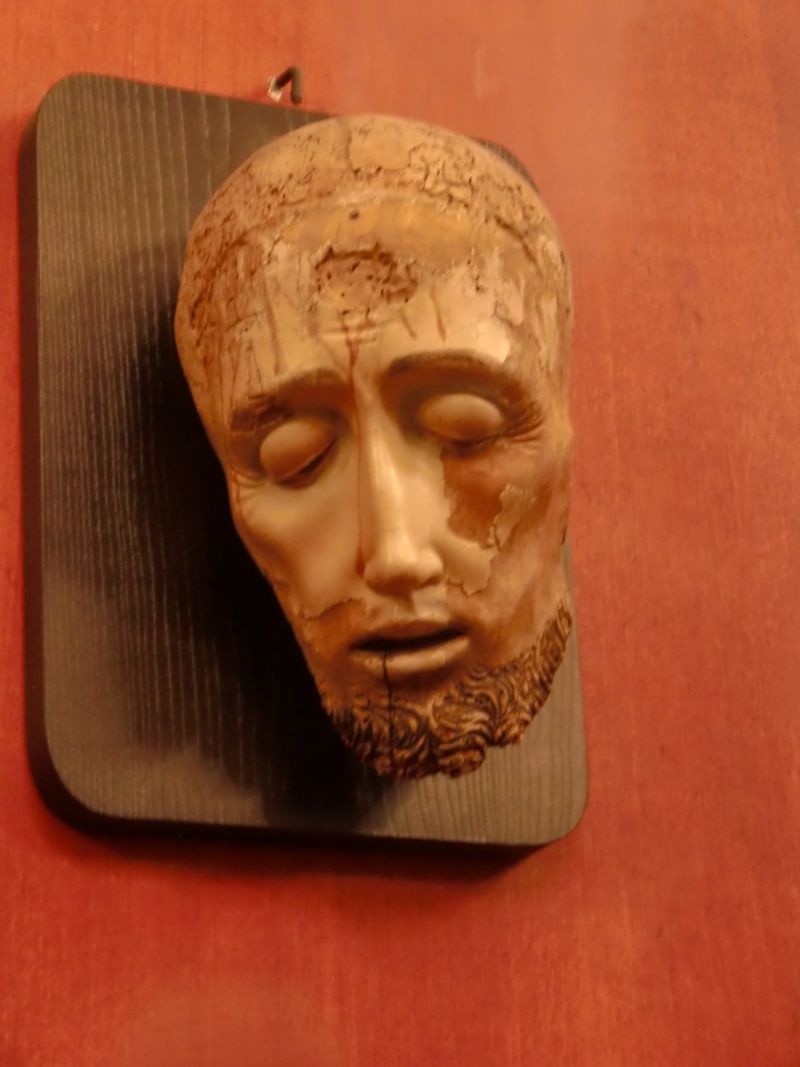 For the first time, the HRC has indexed municipalities based on LGBT equality criteria.  This can be used by businesses and workers in determing what cities promote the economic growth that comes from diversity and equality. 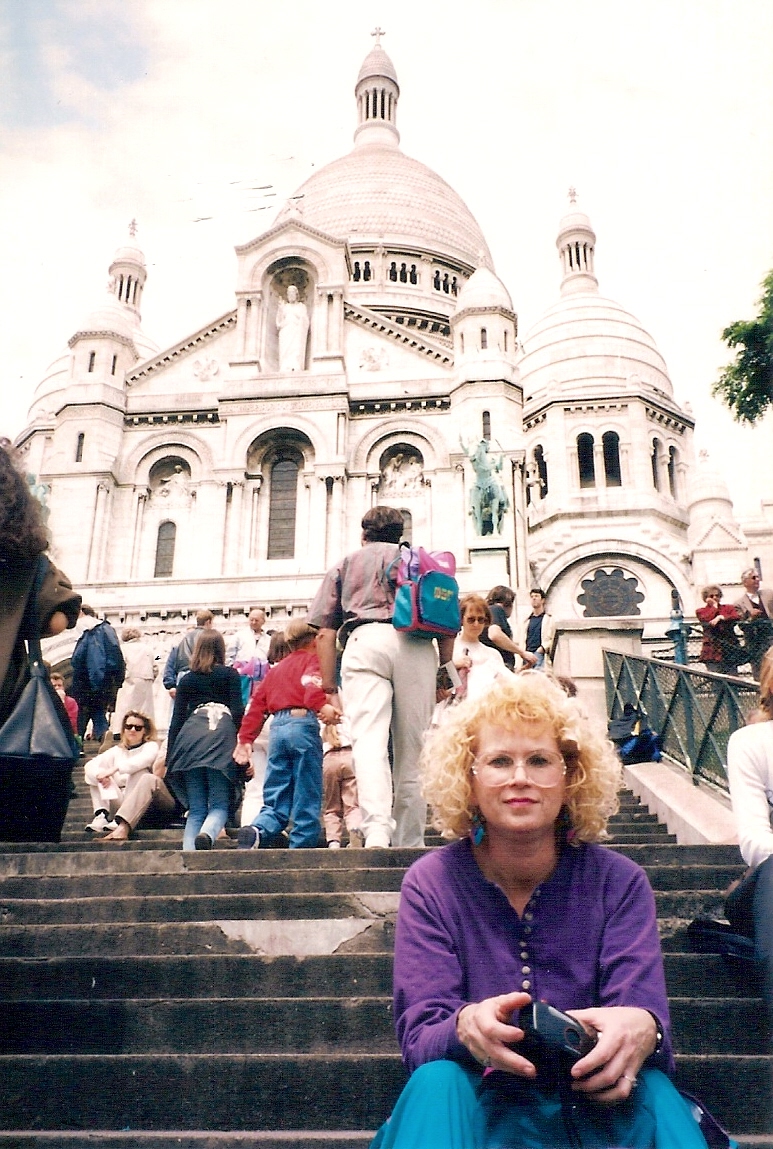 In 1995, Mom and I separated from our group in order to go see Sacre Couer.  We made the mistake, however, of exiting at the wrong Metro stop.  The one we picked had an incredible number of steps up.  We were exhausted when we made it to the street.  Then, we approached the church from the side, and only saw more steps.  Halfway up those, Mom said, "What is the name of this mountain?"  "The mountain of the martyrs."  "Now I know why."  When we got to the top, we saw the funicular.

In 2000 I got there the correct way, and after touring the church visited the artists' square behind it, where I bought a little painting of poppies and had a nice chat with the artist.

This time we visited the church and walked down Montmarte. 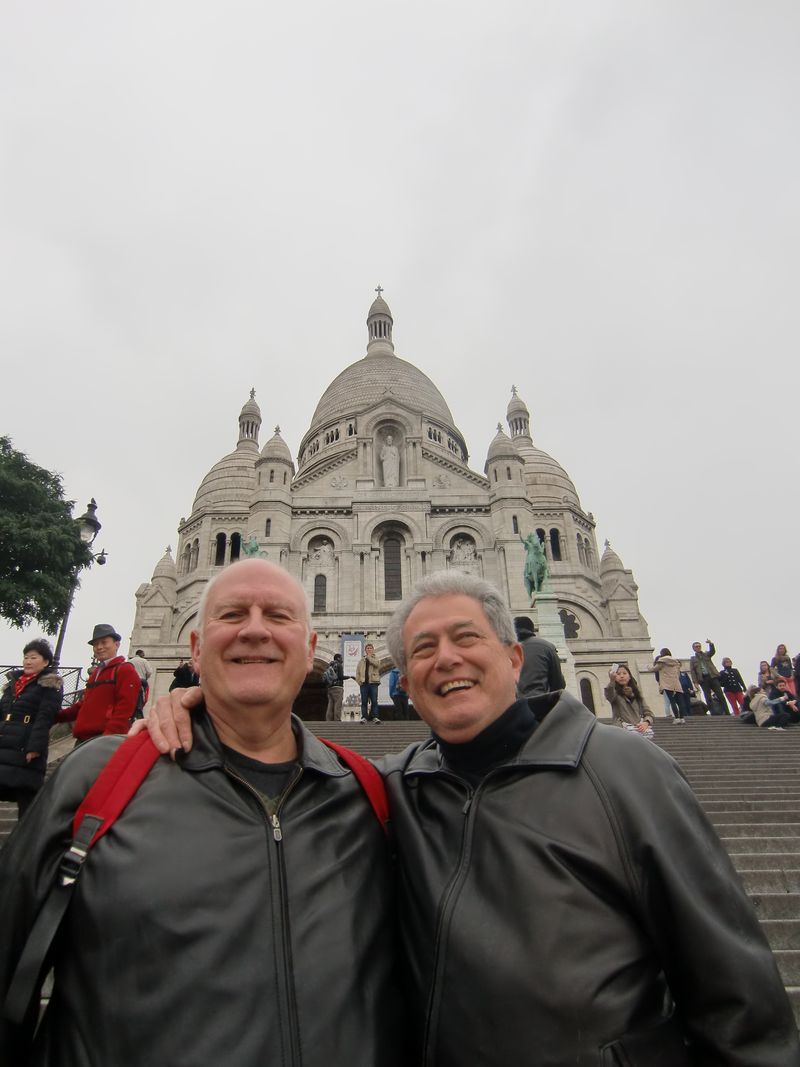 It was my favourite visit to the church.  This time I understood more of the art and iconography than on my previous visits (you can't take pictures inside).  I particularly enjoyed the images in the mosaic above the chancel.  For instance, a dragon crouches beside St. Martha.  Only a couple of years ago did I encounter the story of Martha as a dragon-tamer. 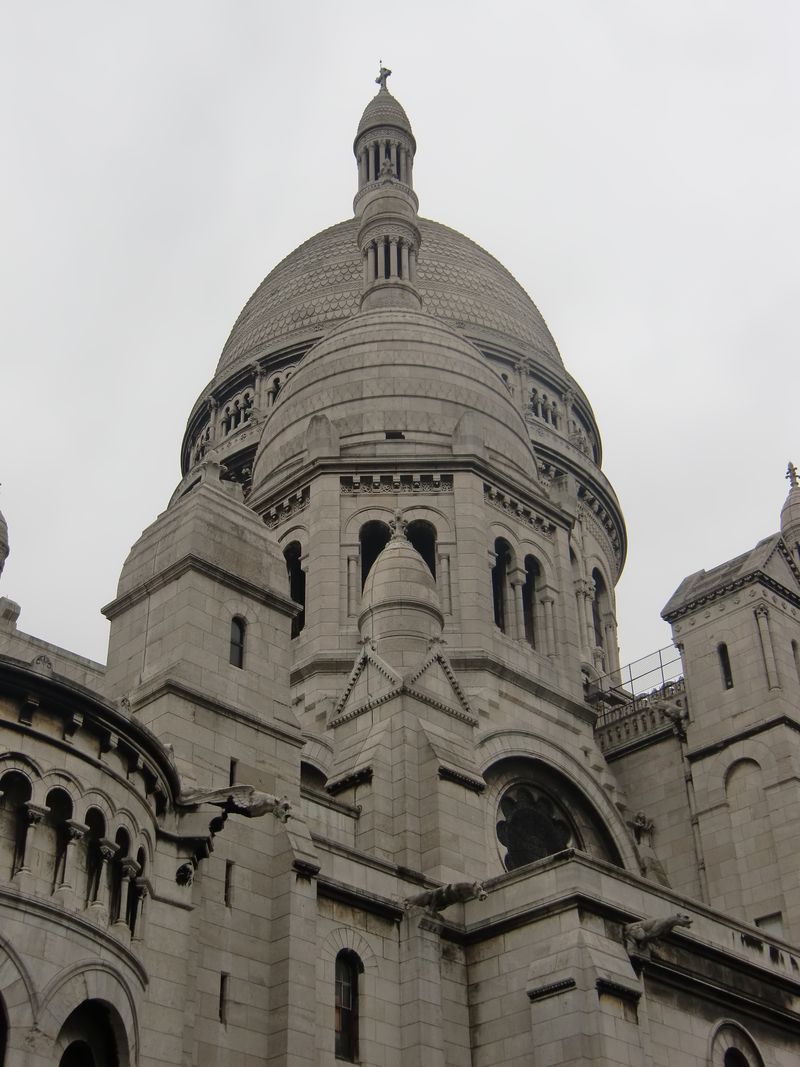 Rob and Tom enjoyed my explanation of church, and said that they appreciated it more than they ever had because of this.  Rob also said it confirmed his longstanding opinion that Sacre Couer, unlike many of the other churches in Paris, is propogandistic for the Catholic Church while also seeming very pagan. 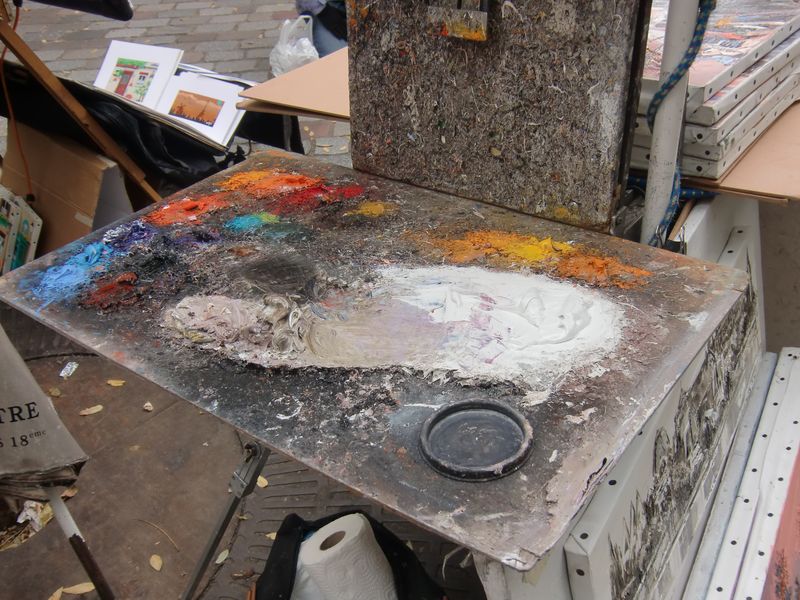 After visiting the church, we drank some beer in an Irish pub, enjoyed Artists' Square, walked down the twisting streets, ate lunch, and went by the Moulin Rouge.  We then traveled back to the Opera neighborhood, where we did some shopping. 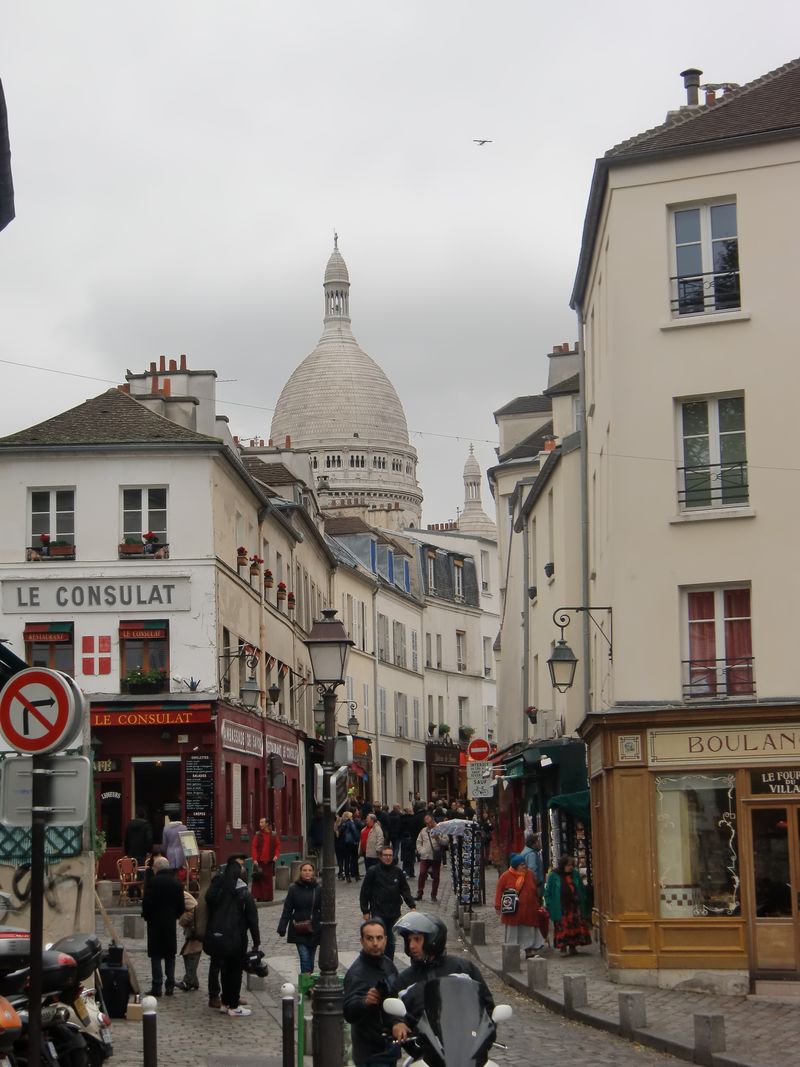 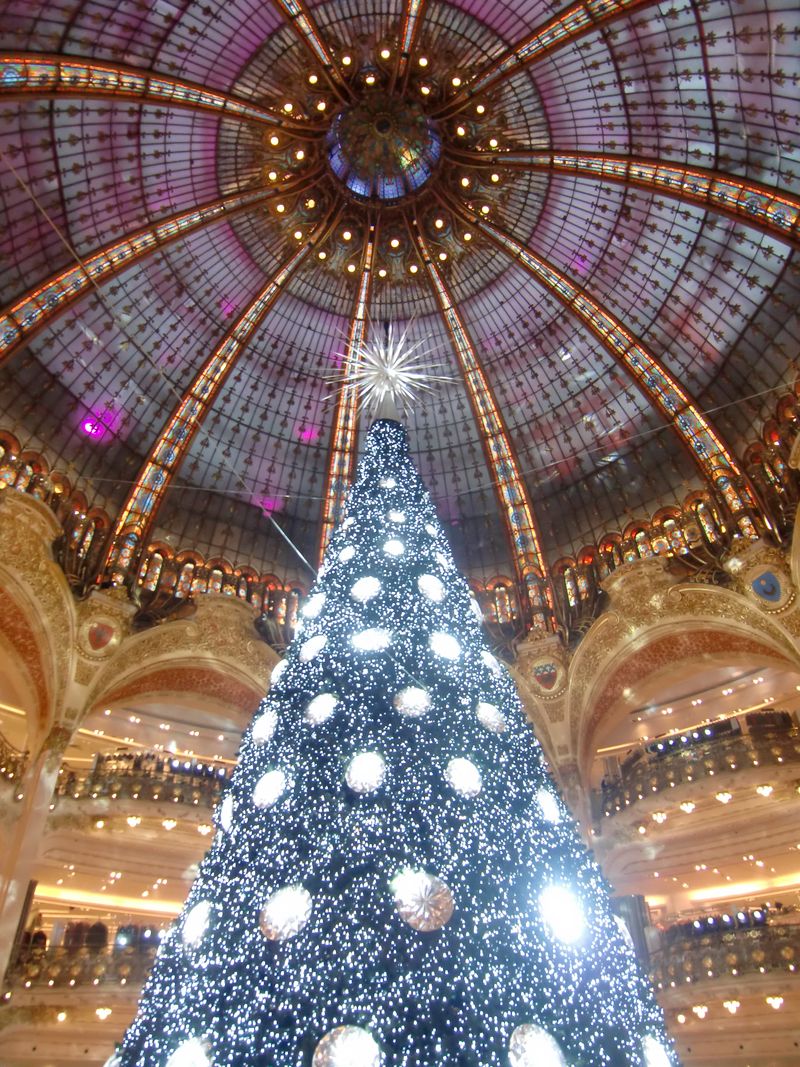 Richard Socarides presents the gay rights to-do list for the second term of the Obama administration.

An article in the New Yorker discusses the trends in Texas politics and the predicted decline of the GOP.  An excerpt in which the state GOP chair discusses trends:

“If I say to you, your life depends on picking whether the following state is Democrat or Republican, what would you pick?” Munisteri asked. “The state is fifty-five per cent traditional minority. Thirty-eight per cent is Hispanic, eleven per cent is African-American, and the rest is Asian-American, and two-thirds of all births are in a traditional minority family. And if I was to tell you that, nationwide, last time, Republicans got only roughly four per cent of the African-American vote and about a third of the Hispanic vote, would you say that state is Democrat or Republican? Well, that’s Texas. We are the only majority-minority state in the union that people consider Republican.”

Immigration from Mexico only partly accounts for the change. More than a million Americans have moved to Texas in the past decade, many from traditionally Democratic states. More than three hundred and fifty thousand Californians have arrived in the past five years; since 2005, over a hundred thousand Louisianans permanently relocated to Texas, mostly in Houston, after Hurricane Katrina. The population is also skewing younger, which means more Democratic. But Munisteri is more preoccupied by the racial and ethnic changes. He turned to a chart showing Texas’s population by ethnic group over the next few decades. A red line, representing the white population, plunged from almost fifty-five per cent, in 2000, to almost twenty-five per cent, in 2040; a blue line, the Hispanic population, climbed from thirty-two per cent to almost sixty per cent during the same period. He pointed to the spot where the two lines crossed, as if it augured a potential apocalypse. “This shows when Hispanics will become the largest group in the state,” he said. “That’s somewhere in 2014. We’re almost at 2013!” He added, “You cannot have a situation with the Hispanic community that we’ve had for forty years with the African-American community, where it’s a bloc of votes that you almost write off. You can’t do that with a group of citizens that are going to compose a majority of this state by 2020, and which will be a plurality of this state in about a year and a half.”

He told me that he had a slide that he wouldn’t show me, because he didn’t want Democrats to know about his calculations. He said that it depicted the percentage of the white vote that Republicans would have to attract if they continued to do as poorly as they have among Hispanics.

“Over a hundred per cent is not possible,” I offered.

Munisteri travels around the country with his slide show, urgently arguing that Republicans will wither away if they don’t adapt. In the spring, he briefed Republican members of Texas’s congressional delegation. After half an hour, a congressman rose to summarize the material.

“What you’re saying is that if the Republican Party is not doing its job attracting Hispanics to the Party, the Party in a very short time nationally and in Texas will be toast?” Munisteri replied, “That’s it, Congressman.”

This week, as SCOTUS will deterimine which marriage equality cases it will take, AFER reviews the over a dozen cases in which the Court has ruled that marriage is a fundamental right.

It was the best piece of beef I've ever eaten.  Here's the story. 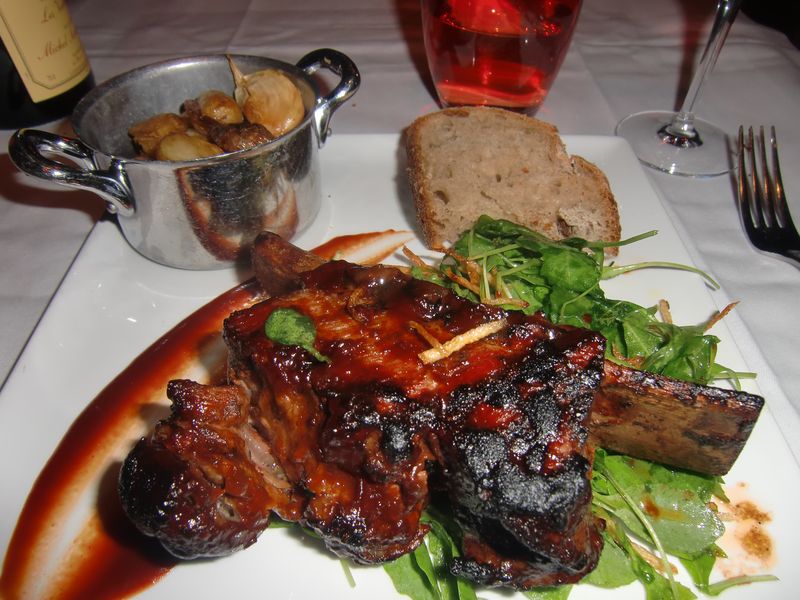 That Tuesday night in Paris we wondered around looking for a place to dine.  Tom had gone to the grocery store earlier in the day and said when he returned, "There are a number of restaurants north of us.  We should go that way tonight."  So, we did.  For Rob, who has stayed at the same hotel over 50 times, the restaurants a few blocks north were a surprise, new to the area since he had last wandered that way.

We just couldn't seem to pick any place, and finally were lured in by the menu of a place called Absinthe.  And boy were we glad.

I don't remember what the other guys had, but I selected the Grilled Prime Rib-Black Angus.  It came with Baby potatoes and garlic confit.

As I wrote at the opening, it was simply the best piece of beef I've ever eaten.   It was so tender, it melted in my mouth.  And the flavour!  I said to our excellent waiter Sylvain, "This is the best beef I've ever had, and I'm from the Great Plains.  We know beef!"  He smiled a devilish smile. 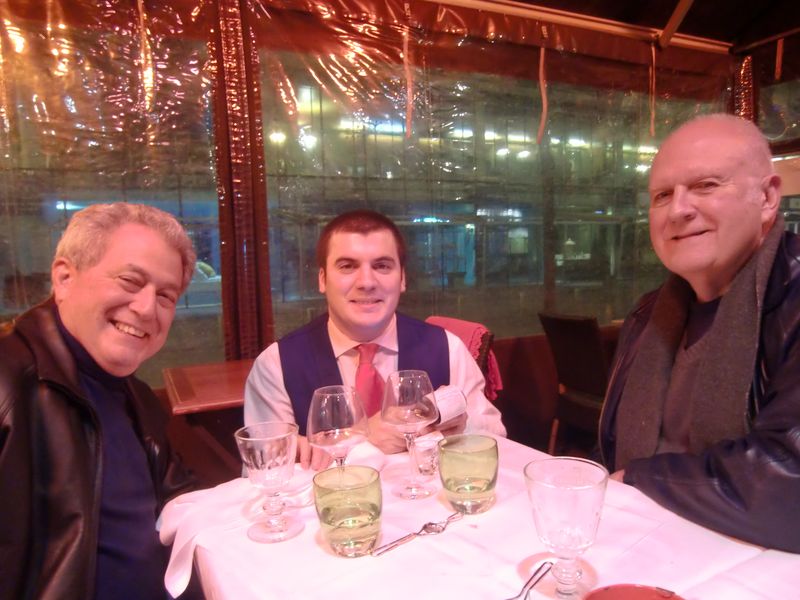 As we neared the end of our main course, the table behind us ordered absinthe itself, and we decided that we must do the same.  I'd never had it before, but really enjoyed it. 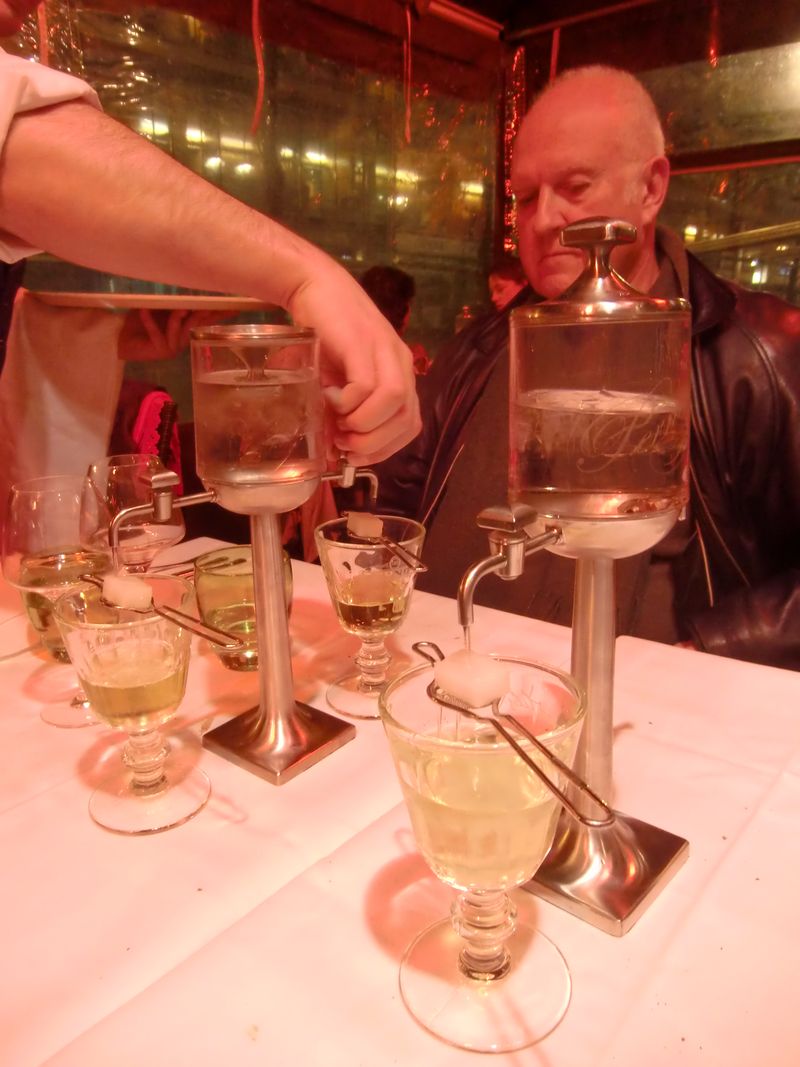 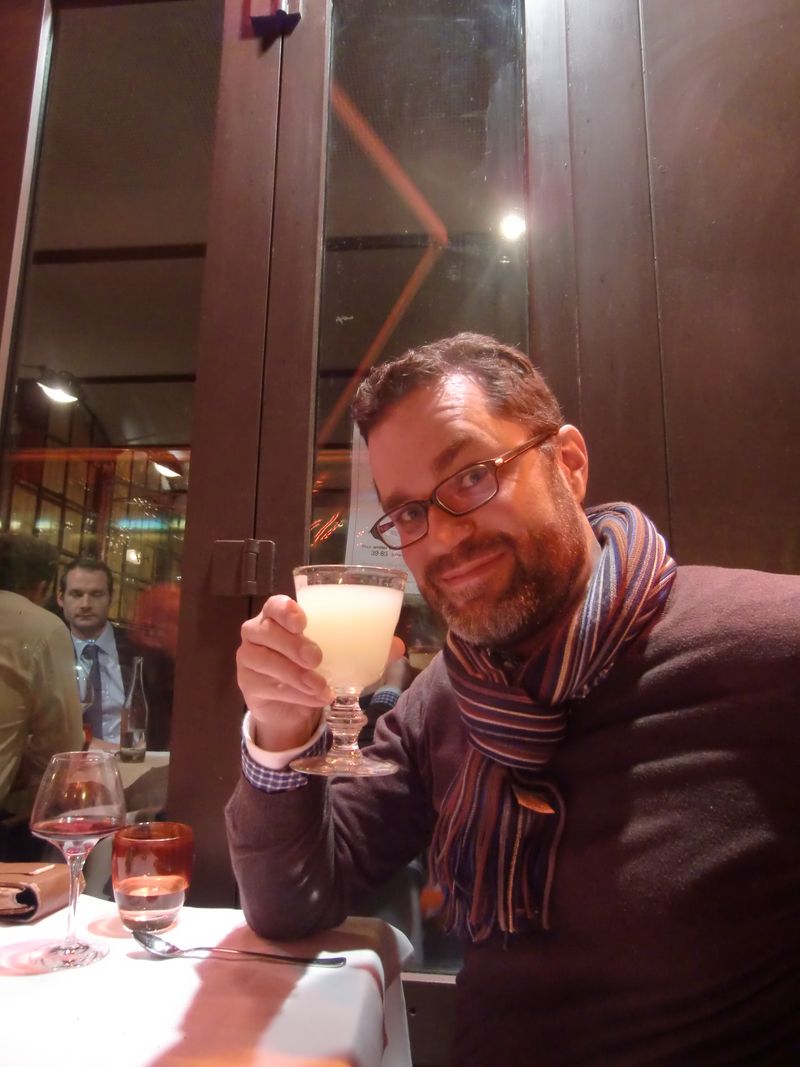 Then, we ordered dessert.  I had the home made ice creams and sorbets. 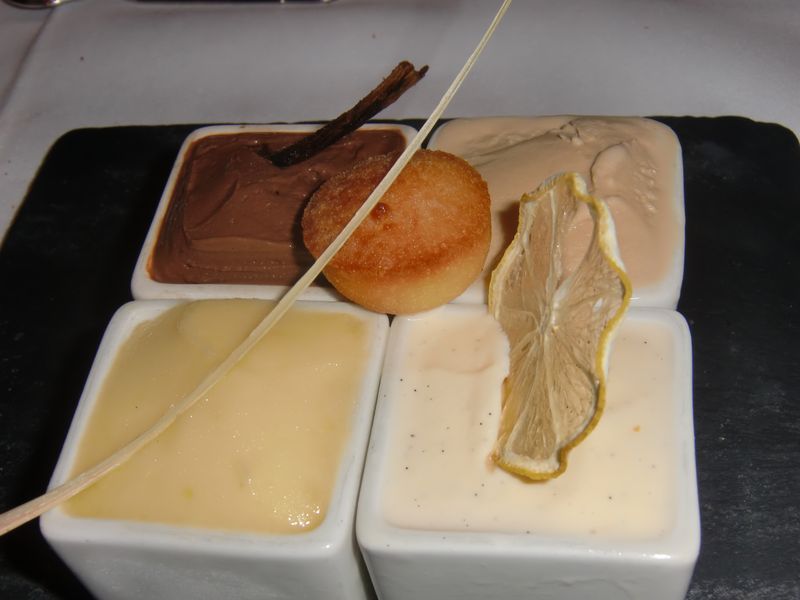 Afterwards we all agreed it was the best meal we'd had in Paris.  Tom kept saying it was among the best meals he'd ever had.  I agreed.