The Hilarious Story about the Painting

We were in downtown Miami, Oklahoma at the bookstore and coffee shop enjoying catching up with my longtime friend Juan Penalosa.  He needed to take a conference call, so Michael and I decided to walk up and down Main Street and browse the stores, something I haven't done in many decades.  Fortunately, most of the stores have something in them, unlike many years, though its nothing like the days of my childhood when they were filled with department, clothing, and shoe stores.

As we turned at one end of the street to walk back, I said to Michael, "Did you ever see the murals we painted in the public library?"  Michael said, "I don't think so, because I don't remember stifling laughter."

So, we walked over to the library.  The last time I saw them, they were on the second floor, in one of the rooms up there.  Note: I last saw them in the mid 1990's, when I took my college girlfriend Jennifer to see them.

We walked up the steps to the second floor, but all the doors were locked.  Then, we walked downstairs into the main entrance.  The man behind the desk, who we later learned was named Terry, asked, "Can I help you?" 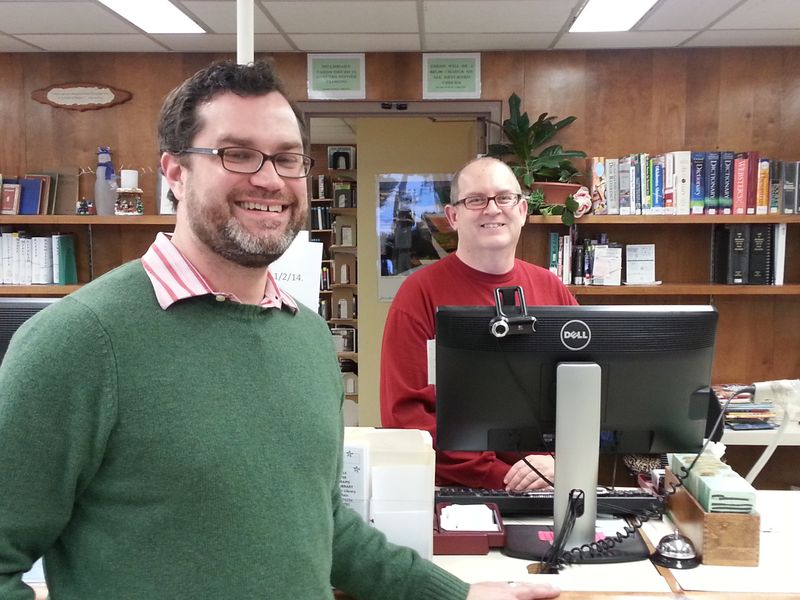 I said, "My elementary class painted some murals that used to hang in one of the rooms on the second floor.  Are they still around?"

Terry: "No, there is nothing like that up there.  And I've worked here for seven years; I don't remember anything like that.  Sorry."

Terry:  "And they were paintings of things that are around Miami?"

Terry:  "Oh, we did find those in the basement once.  No one knew anything about them or where they came from.  I'm note even sure if they are still down there.  Let me go and check."

He left and returned a few minutes later, beckoning us to the basement.  Another librarian, a woman, was down there and the two of them took us to a back corner (I was last in the basement when I worked at the library -- my first job as a fifteen-year-old; I was fired from that job, which is another story).  There were the three panels.  As we pulled them out to look at, I explained what they were. 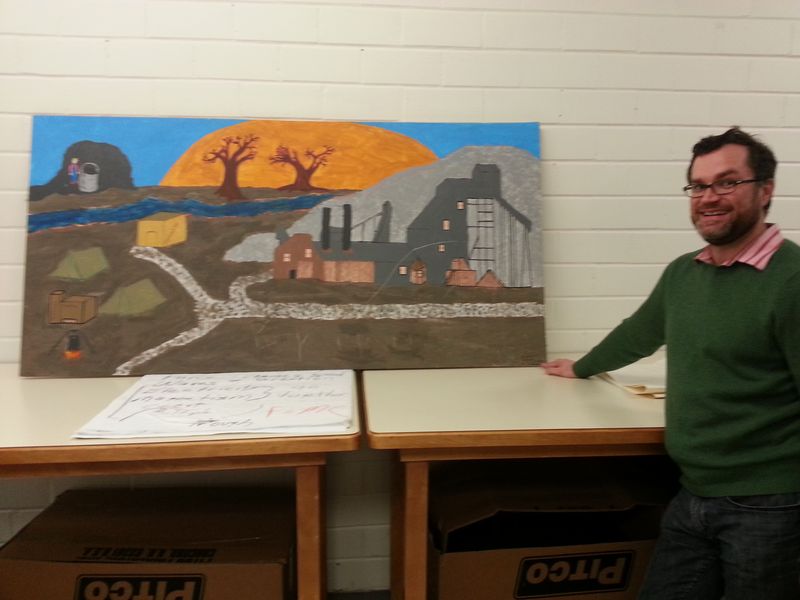 Our Gifted and Talented class in fourth grade (I believe that was the year, if not it was fifth grade), met at the public library on the second floor.  During that year we created these paintings of aspects of Ottawa County.  Mrs. Geneva Rush, our teacher, broke us into three groups to research the paintings and create them.  One was significant buildings, another was Native influences, and one was mining.  That was my group.  Our county was a major source lead and zinc mining, which supplied the country during the First and Second World Wars.  And also left much environmental damage, though we didn't fully understand that when we did the painting.  These paintings and then hung in the library, at least for a decade afterwards.

Lori Helton-Bailey said that she thinks they were part of a statewide effort, where kids in every county produced paintings that then went to Oklahoma City to be displayed.  She remembers that they were displayed in the Murrah building, and she always thought they were destroyed in the bombing.

The painting had been vandalized at one point, and may be why they were taken down.  It is scratched, including having a cuss word scratched in it.

After I explained what I knew of the paintings (I learned Lori's recollections later in the day), the woman librarian said, "You want it?"

Surprised, I said, "Well, I would rather they be kept in Miami and used somewhere. . ." as I said this, she gave me a look like I was delusional, so I kept talking . . . "but if they are going to be thrown away or kept in a basement, then yes, I guess so."  I looked anxiously at Michael, who signalled that he was okay accepting it.  She then asked if we wanted the other two, but we declined.  They aren't as good as ours anyway (plus we weren't sure the one would fit in our vehicle).

She said, "Let me go check with my boss first.  They are City property."  She came back later and said, "It's alright.  Go ahead."

So, we took the painting.  As we were carrying it out, I commented that I was still Facebook friends with the three other kids in the group -- Lori Helton, Kim Baldwin, and Dustin Headlee--and that I couldn't wait to send them a message about the painting. 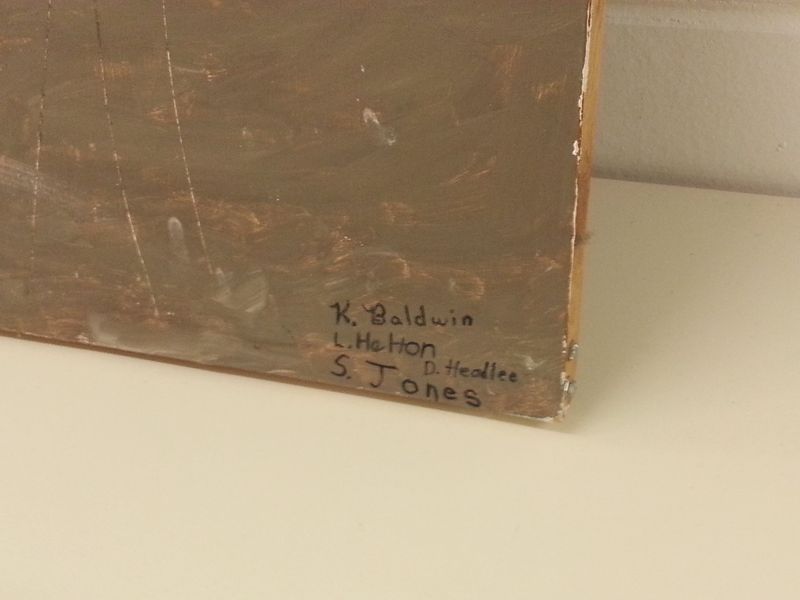 We went and got our car, and Juan, and came back to load the painting.  That took some work, but we got it in there.  I was giddy and jumped up and down, clapping my hands and laughing.

We went shopping to kill some time before dinner, and I sent Lori a message asking if she was in town and then explaining what had happened.  She was excited, saying she had been talking to her husband Will about the painting just recently.  So, we arranged to bring it by her house for her to see it. She was pleased that the painting was better than she remembered it being.  Lori also sent Kim a message, because she thought Kim was in town.  She was, but wasn't able to arrange a meeting to see the painting.

So, Michael and I hauled it back to Omaha.  Now, where should we hang it? 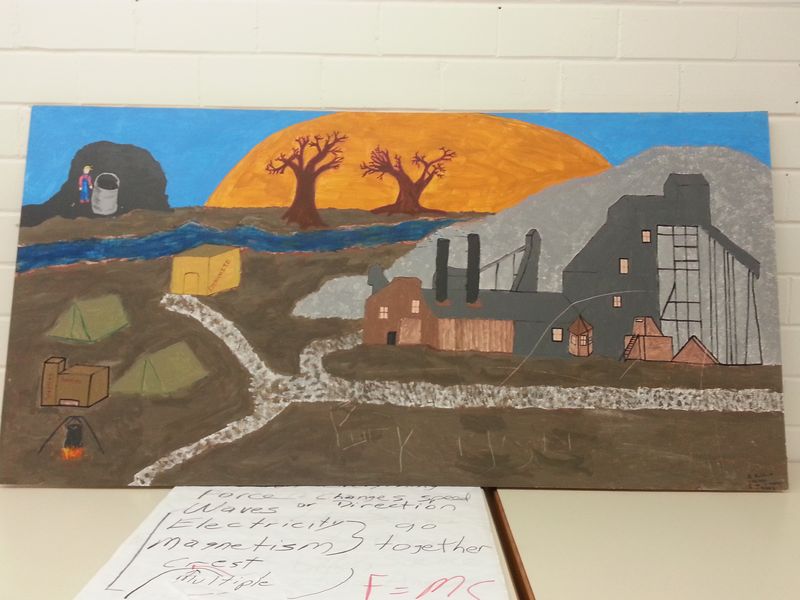