The day started well enough.  In fact, it was the clearest, prettiest day of our vacation, which was quite fitting because we spent the morning driving across the island from Kailua-Kona to Hilo over the Saddle Pass Road that runs between Mauna Kea and Mauna Loa.  Usually clouds hang around the peaks of the mountains, obscuring views, but not today. 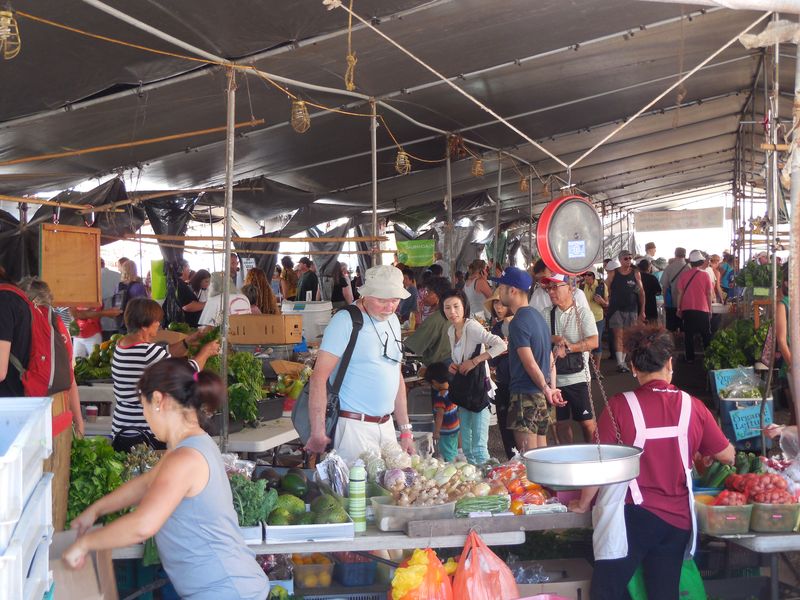 The beautiful morning drive ended at the Hilo Market, which is on Wednesday mornings.  We browsed the many booths tasting food and checking out the crafts. 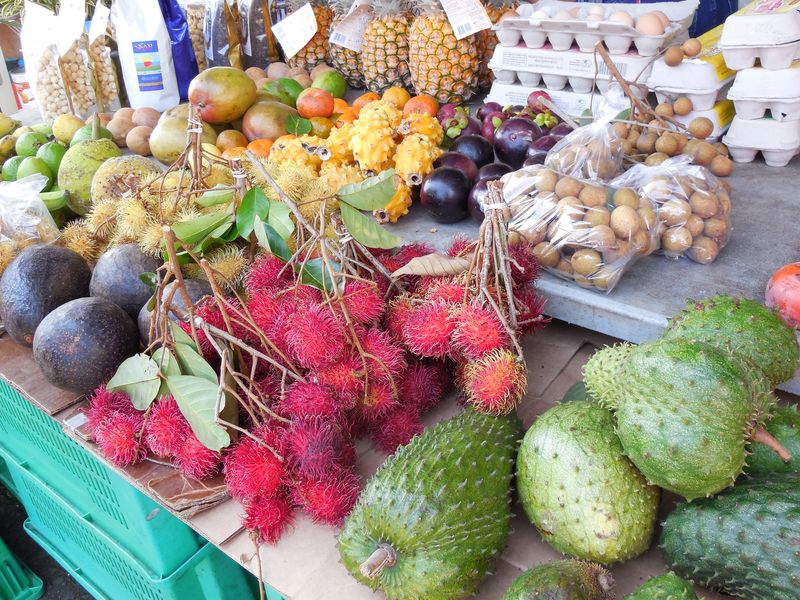 For lunch I noticed that there was a Filipino place across the street, and Michael got all excited when I showed him.  He enjoyed some of the things his Mom used to make, and we particularly liked the Filipino roast pork, which reminded us of what we had at our wedding. 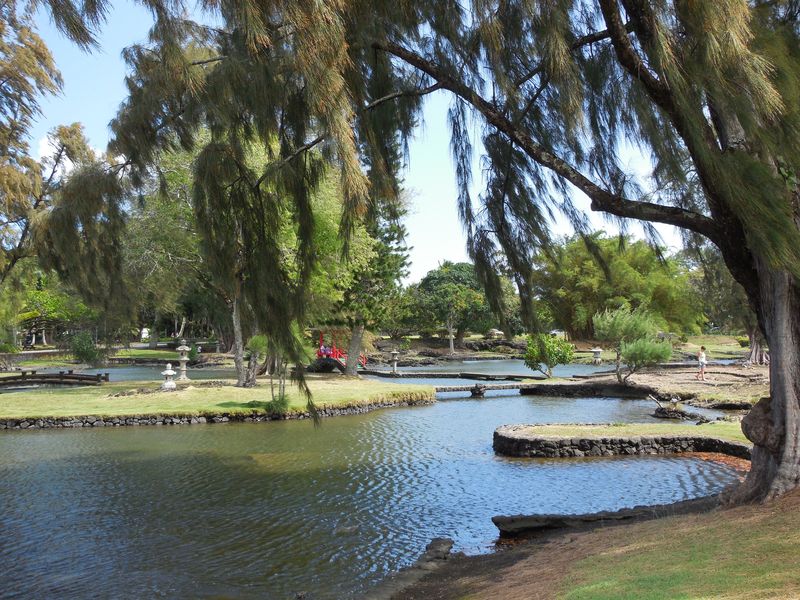 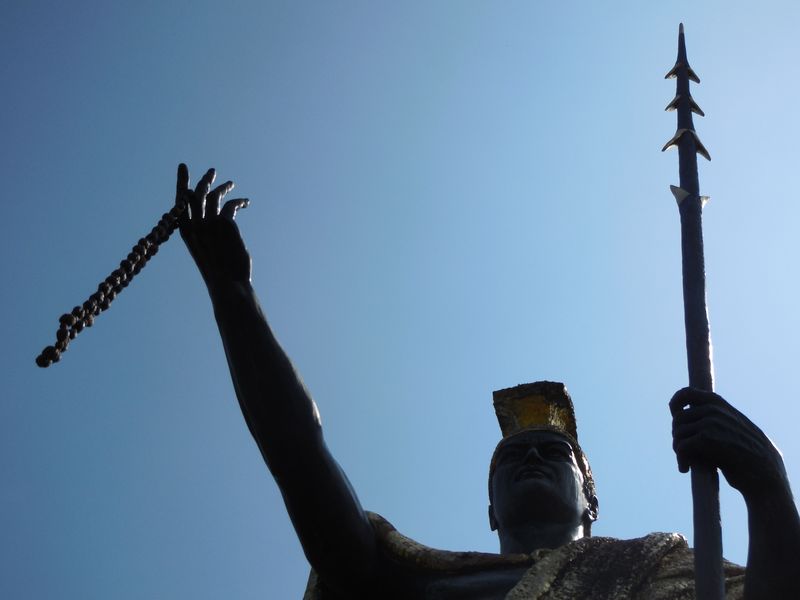 Then we toured around Hilo, visiting the Queen Liliuokalani Gardens, the King Kamehameha statue, and the Naha Stone.  Like the sword in the stone of Arthurian legend, whoever could first move the Naha stone, which weighs 7,000 pounds, would be the first king of a united Hawaiian islands.  If someone tried to move it and failed, they would be killed.  The story goes that Kamehameha tried and when he was unable, the priest was approaching to pronounce his death, when he was able to overturn the stone. 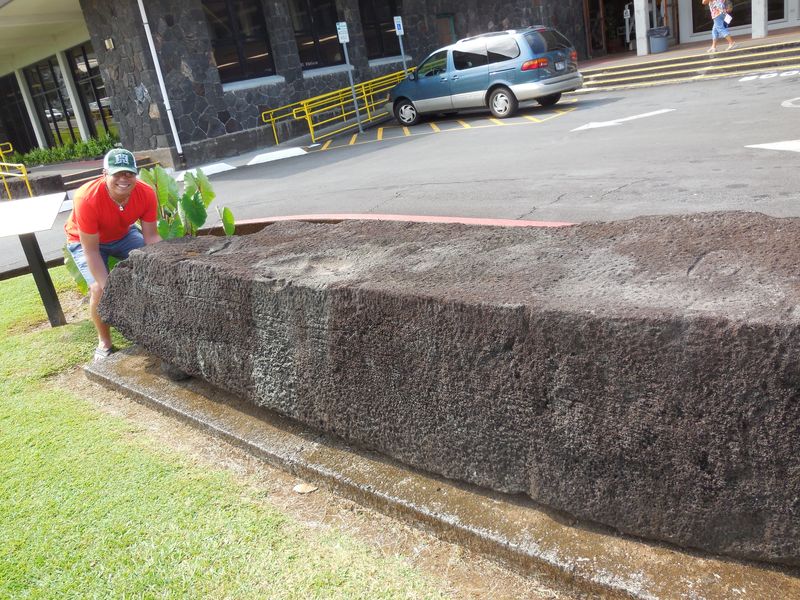 [Note: Michael was not touching the stone, as per the sign near it.]

Our final stop in the immediate environes of Hilo was Rainbow Falls, where we also saw a pretty incredible banyan tree. 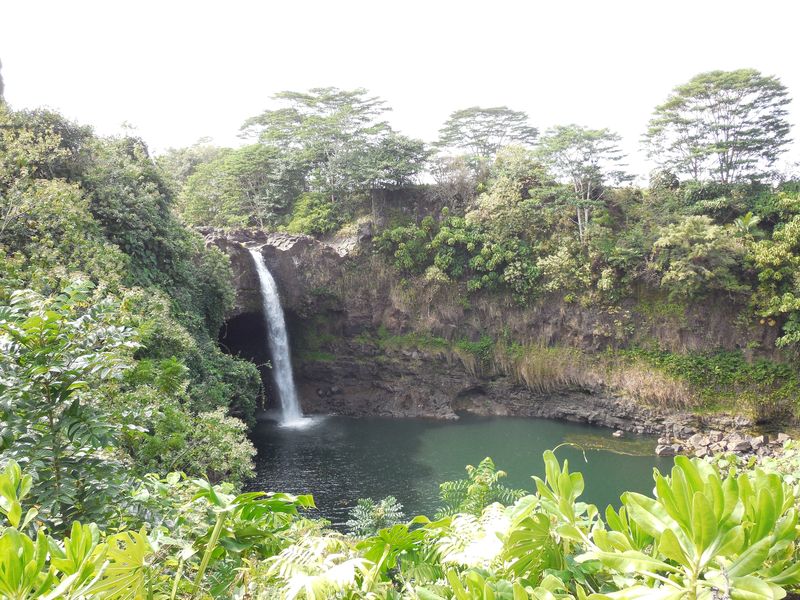 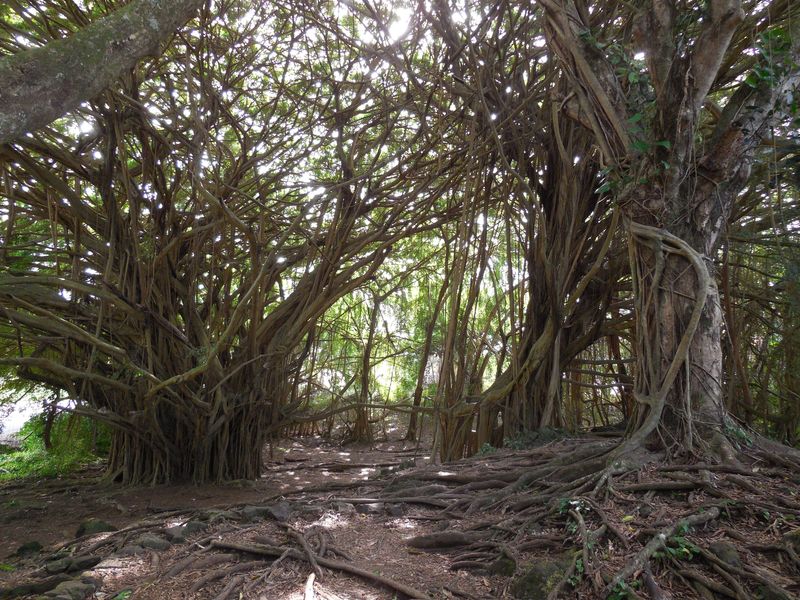 From Hilo we headed north on Highway 19 with plans to see sites along the northeast coast, but we'd spent so much time in Hilo, that there was little time left for any attractions, especially if we were going to make the Waipio Valley Overlook before sunset.

There were things we wanted to see along the Hamakua Coast which we did not, but that and much else will have to await a future trip.

We did take the scenic drive overlooking beautiful Onomea Bay and decided to hike down the donkey trail (that's its name) to the shore of the bay.  When we reached the idyllic shore, we set our stuff down and wandered out onto the rocks. 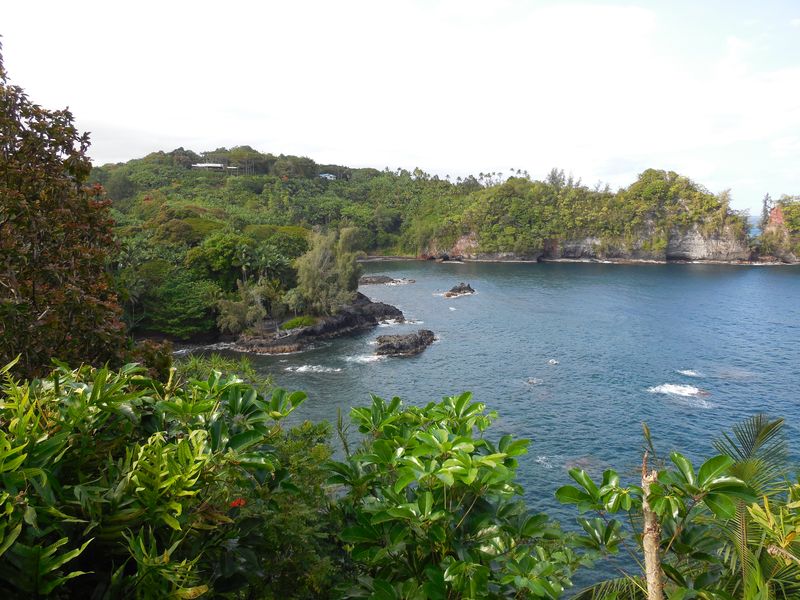 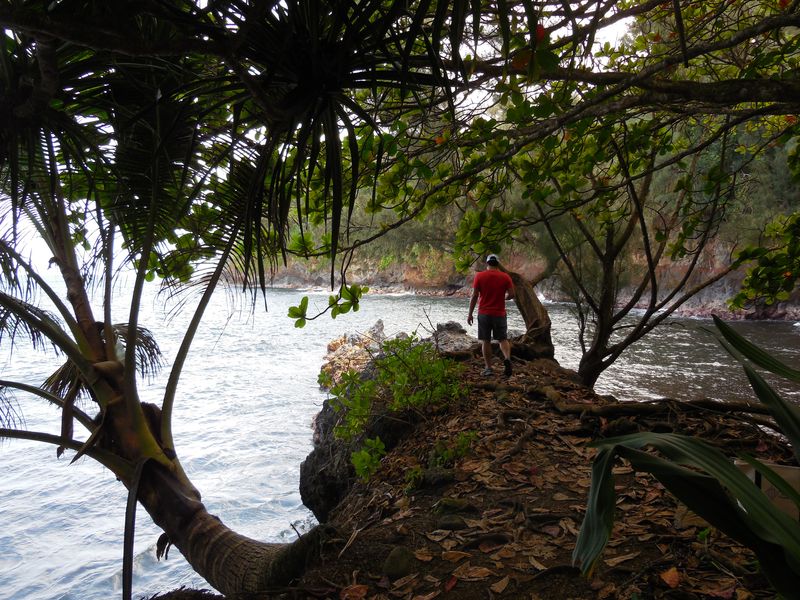 Not only was it beautiful, but there was lots of ocean life in the rocks.  I pointed this out and said something about not wanting to be those stupid people who stand watching the ocean only to get pulled in by a big crashing wave.  Not long after that, just after Michael took a picture of me with his phone (I still haven't seen that photo) a big wave did crash on us.  Fortunately, it didn't pull us off the rocks (though Michael, who was facing the ocean was momentarily frightened) but it did drench us.  We laughed and laughed at ourselves, enjoying the adventure.

Except that we then had to change into our swim trunks and dirty beach t-shirts for the rest of the evening--when we were planning our nicest, most expensive dinner that evening at Merriman's in Waimea.  And sure enough, hours later, we enjoyed our magnificent steak dinners in our grungy beach-wear as everyone else around us was properly attired!

After leaving Onomea Bay, we continued our drive along Highway 19 along cliffsides and across gulches, with beautiful views of the ocean, the rainforest, and the occassional waterfalls.  In the quaint town of Honokaa, we turned toward the overlook.  I've already written about this magical moment and my sense of gratitude, on this the final night of my thirties.

So, even being all wet and in our dirty clothes didn't ruin this enjoyable day. 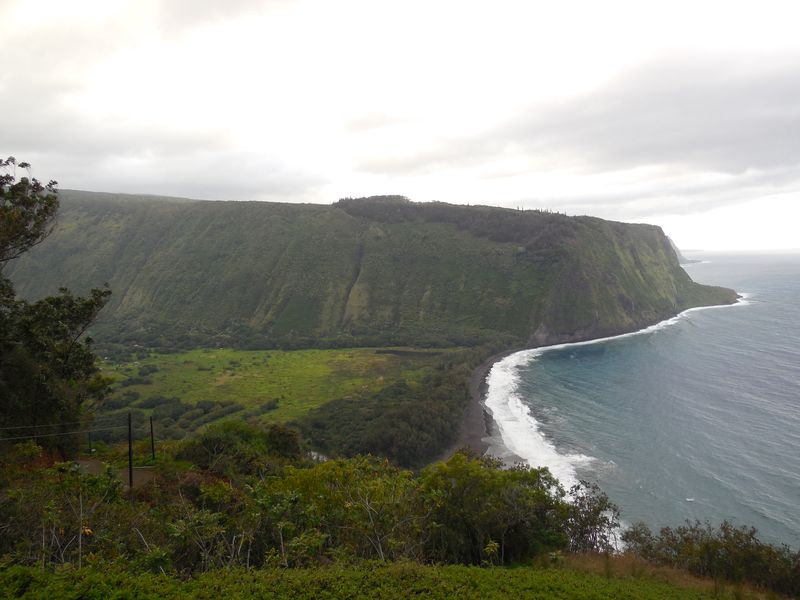