At least since I read Mark Twain's Roughing It, I've wanted to see Kilauea, though I didn't plan to be as adventurous as he.  In the 19th century the caldera of Kilauea included an active lake of fire which inspired sublime experiences.  Twain writes about its terrific majesty, and his desire to get as close as he could.  In the night he ventures forth across the crumbling, hot lava, losing the path, and eventually watching as a rock before him begins to break off into the active lava.

Kiauea is not currently putting on the same show, but still I felt drawn to it.  Michael as well, because he is fascinated by volcanoes.  So the first major adventure of the week would be our trip to the volcanoes on the other side of the island.

To get there, we chose to go around the South Point of the island.  Driving south from the Kona region one encounters lots of coffee and nut farms as you get more rural.  Rural with an ocean-view, though.  The road is high up at this point and you get grand views down the slopes or over cliffs to the coast line, when it is in view.  Eventually the woods and shrubs give way to lava flows of varying sizes and colors.  The newest are black as pitch.  The older ones are brown.  The oldest are covered with life--ferns and shrubs and grasses.  These lava flows are otherworldly (not the only time those words would appear on this vacation).  You drive along and suddenly the trees stop and there is black rock on either side going up and down the slope.  At the first major one we stopped and took pictures, mesmerized.  By the end of the day, they were routine. 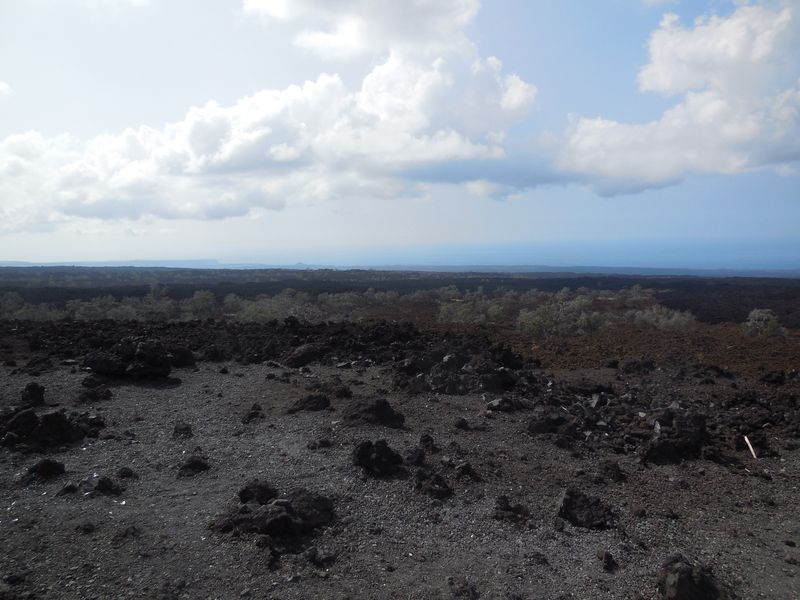 And people live on the lava flows, which is remarkable.  Homes, entire subdivisions, built in the midst of black lava rock.  It would save on mowing.

As we rounded the southern part of the island, we intersected South Point Road and turned left in order to go to the southernmost point of the fifty states.  We decided we are unlikely to ever visit the northernmost point.

Suddenly, the landscape changes again.  We learned quickly that the Big Island is filled with so many variations in landscape and ecology that we shouldn't be surprised with what revealed itself.  South Point Road lays along bright green pastures that made me think of Ireland (though I've never been there).  And there are wind farms, as this is one of the windiest parts of the island, as the few trees make evident. 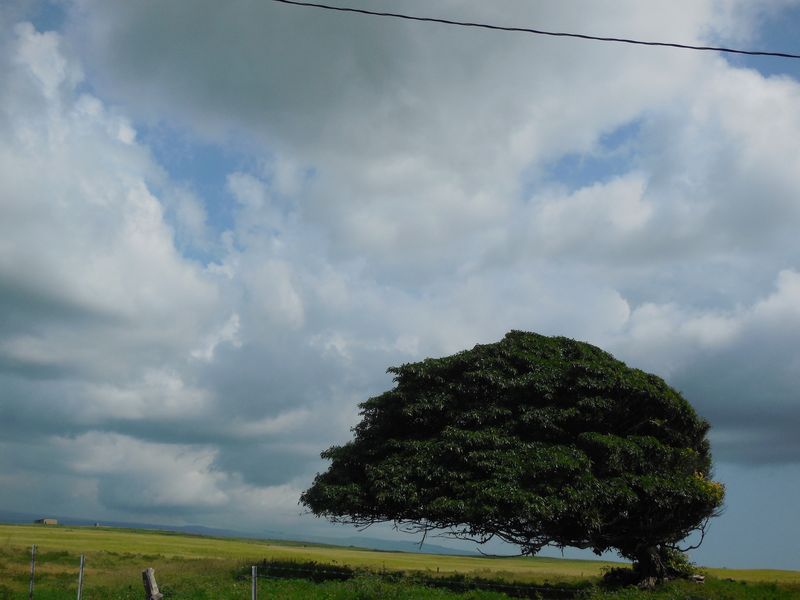 At the end of twelves miles of narrow road where you must ride the shoulder for passing cars (it seems that many tourists don't know how to pass another car on a one lane road.  I grew up driving country roads, so nothing new for me), the green pastures give way to dramatic rocky cliffs and the most stunning shades of blue in the crashing waves. 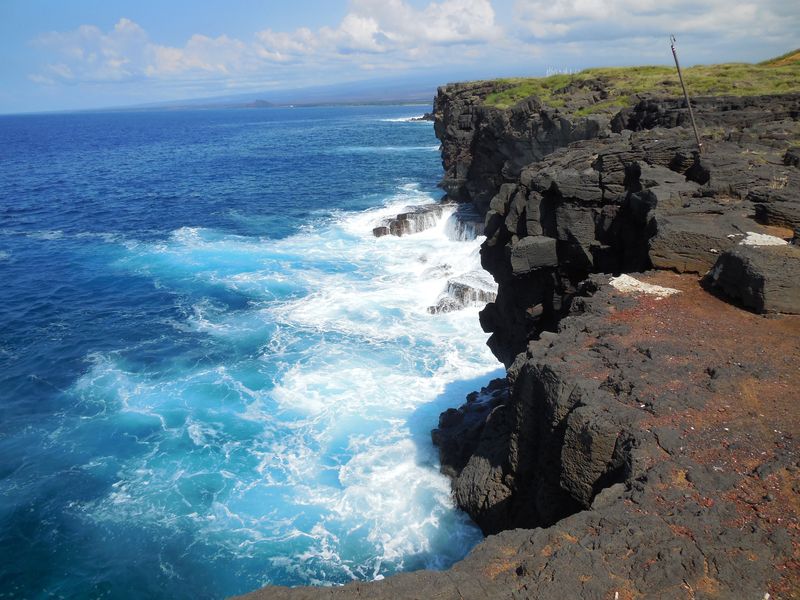 Google South Point Hawaii Cliff Jumping to see how crazy some people can be, as my video of the cliff jumpers did not come out (I realized today as I went to watch it).  And then know that there are warning about how strong the currents are here.  Later in our trip we talked with a guy about South Point, he asked, "Did you jump?"  We said no, but that Michael was kinda regretting it.  The guy said, "I did.  Once."  "Once?"  "Yeah.  The most terrifying thing was not the jump, but climbing back up the slippery, rusty old ladder which feels like it is going to fall off the cliff.  That was the scariest five minutes of my life."

I was satisfied with watching the waves crash on the rocks.

Then, walk along a little further and you reach the actual southernmost point.  South Point is believed to be the place where the very first Native Hawaiians landed after there long and unbelievable voyage from the Marquesas.  We watched crabs in the tidal pools.  According to the website linked in this paragraph, there is nothing but Pacific Ocean between this point and Antarctica. 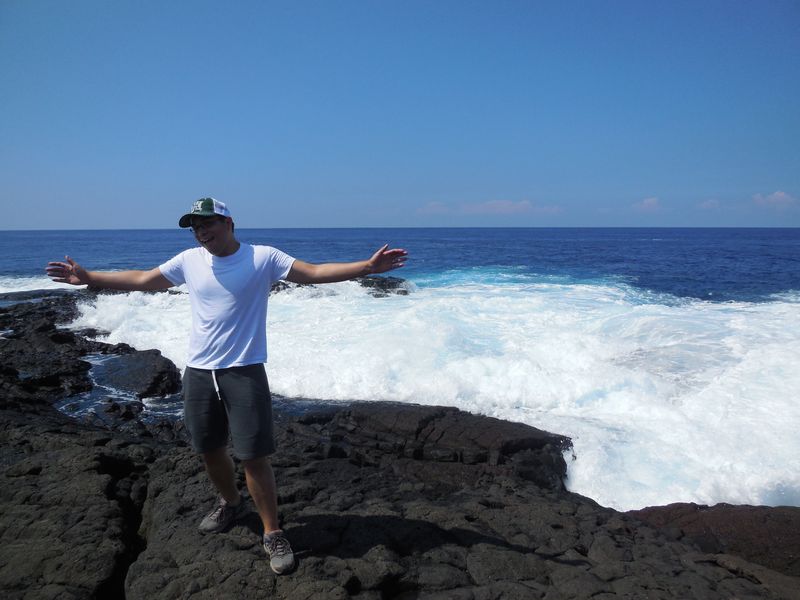 A little further around the point is the Green Sand Beach, but we didn't go as we were already running at least an hour behind schedule at this point, and the volcanoes were are real goal, but the austere and formidable beauty of the South Point was worth our time and diversion.

Back up the twelve mile road, we were now hungry and glad to soon make it to Naalehu where I had read about Hana Hou Restaurant, which is across the road from the more touristy Punaluu Bake Shop (where we went after lunch for some sweet bread rolls that we ate for breakfast much of the rest of the week).  Hana Hou is one of those great little restaurants that one is glad one discovers in the journeys of life.  We had the fish and chips, which were not fried but were pan grilled and were fresh and delicious.  As was the slaw; throughout the island we encounter good slaw, and Michael doesn't normally like slaw.  Order the lemonade.  Despite the base being Country Time mix (I saw into the kitchen), they add some fruit juices to it that make it unique and refreshing.  We oohed at the pie cabinet when we first entered and, of course, completed our meal appropriately.  I had the coconut cream and Michael the banana cream and wouldn't you know that a place that grows those fruits fresh would make amazing pies with them. 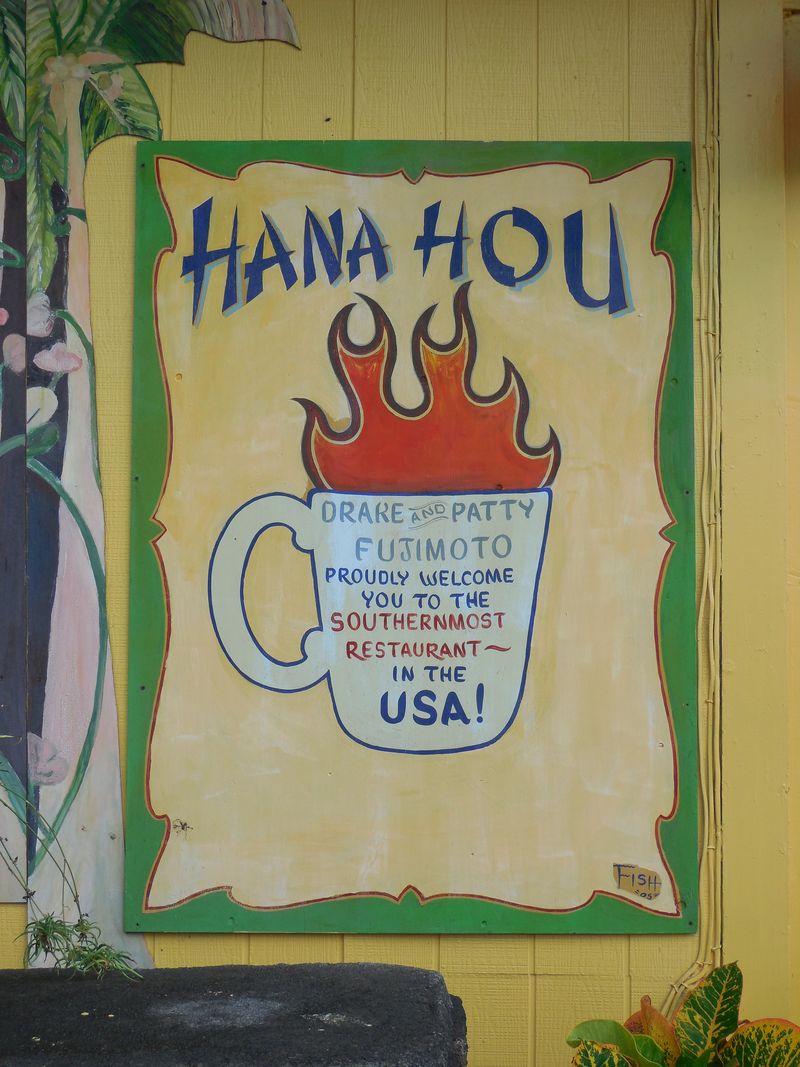 A few miles more down the road brought us to Punaluu Black Sand Beach.  We didn't while away time laying out, swimming, or snorkeling, as we had a destination, but given that it was cool and windy and the water was rough, we probably wouldn't have anyway.  What we did enjoy was the turtles and the lily pond behind the beach. 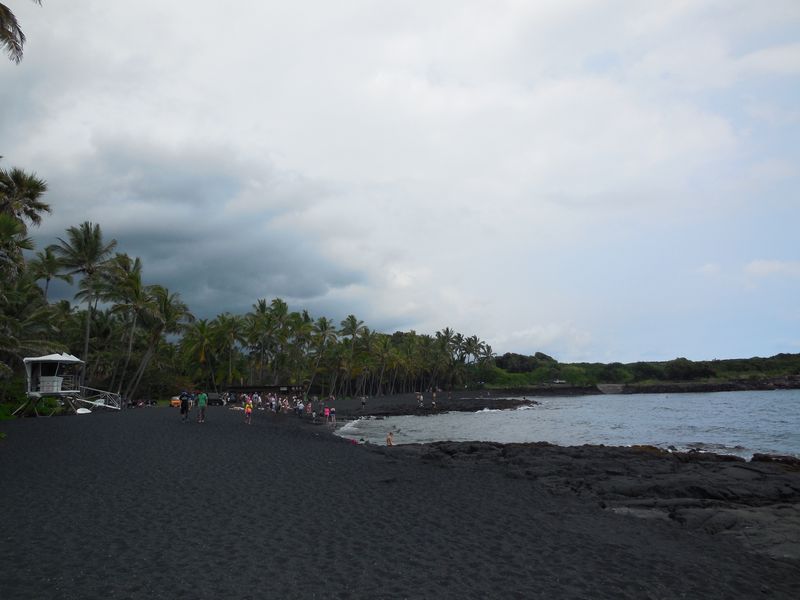 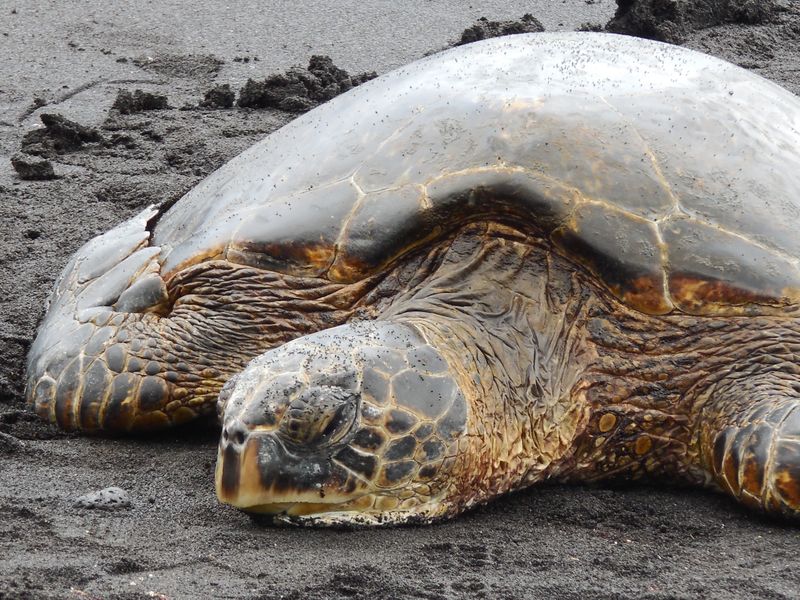 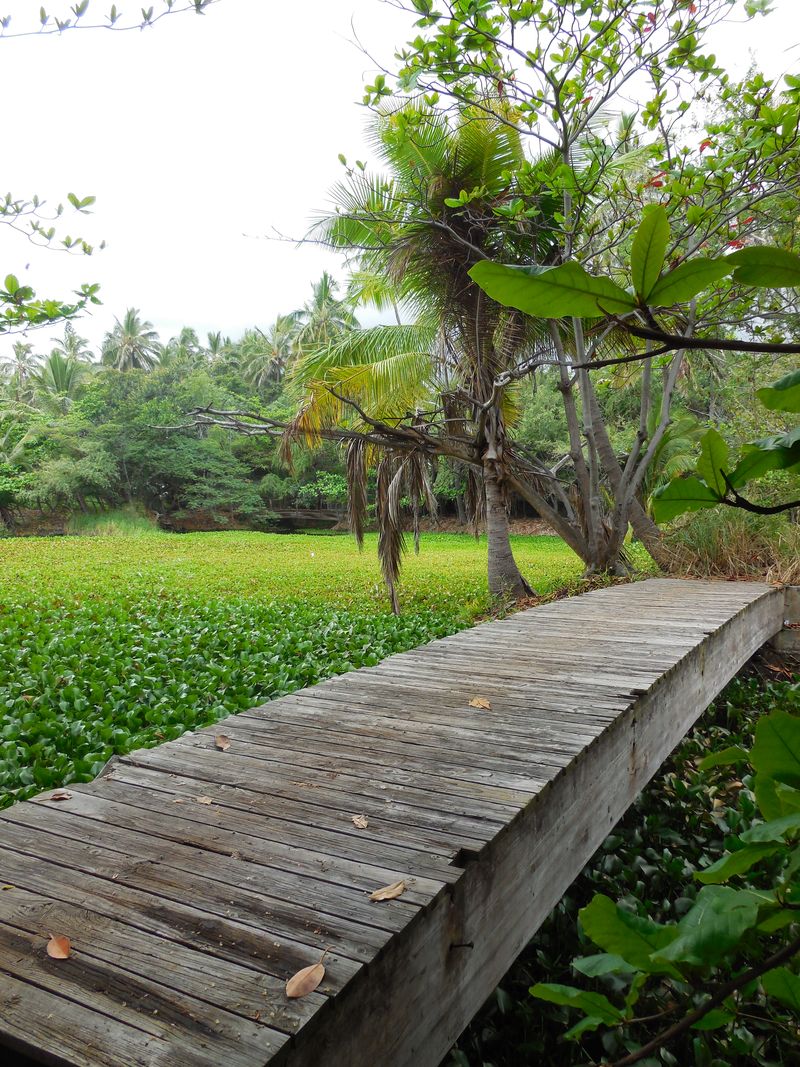 On this eastern side of the island the more arid, Southern California-like landscape, gave way to wet, tropical landscape.  The variations continued and it began to rain.

And from the beach, we drove up and up through the rain as the road now went from sea level to 4,000 feet in not that many miles as we entered Hawai'i Volcanoes National Park and instead of the expected vaste lava waste, we were in a rainforest.  Michael kept saying, "I didn't expect this."

And then our excitement as we saw our first steam vents and parked at the first observation point.  We were so excited but it was cool now and we had to put on rain jackets and such and then we hurried down the path toward the caldera of Kilauea. . . . 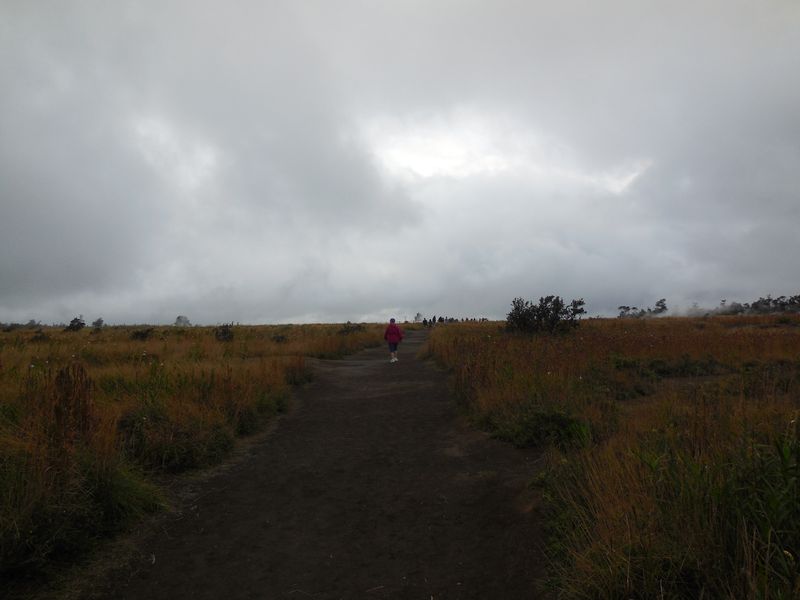