It Is Well with My Soul

This is the sixteenth installment in this series on the hymns I've sung. 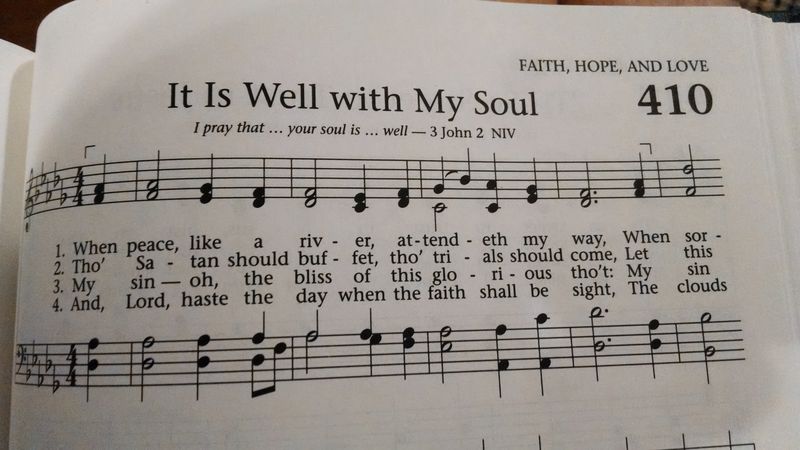 In the eight years I was a member at Shawnee, First Baptist, surveys of the congregation always revealed that their favourite hymn was "It Is Well with My Soul."  Not "Amazing Grace" or some vibrant or stirring hymn, but always this reflective song born from sadness and death.  It was written by Horatio Spafford after his family died in a shipwreck.

I always thought its popularity at First Baptist instead of some more typical hymn was reflective that congregation's attitude toward worship and faith.

It was, of course, a hymn I was already deeply familiar with, but it seemed to gain in richness for me in those years at Shawnee, First.  Those were also years when acacemically I was often engaged in philosophical explorations of the problem of evil and suffering.

When peace, like a river, attendeth my way,
When sorrows like sea billows roll;
Whatever my lot, Thou hast taught me to say,
It is well, it is well with my soul.

And, Lord, haste the day when the faith shall be sight,
The clouds be rolled back as a scroll,
The trump shall resound and the Lord shall descend,
"Even so," it is well with my soul.

I have a vivid recollection from Royal Lane, some years later.  Ben & Leland had just joined and were the first really visible gay couple.  They both sang tenor in the choir.  On this particular Sunday they were singing the special music, a duet of this song.  They sang the final verse with such stirring force that I don't think there was a person in that congregation who was not moved.

And it seemed to me, at least me who was finally beginning my own journey out, that there were new layers of meaning in the song that day, praying for God to hasten the day and that whatever might come it would be well with my soul.

There are only 2 or 3 hymns that I've been overcome with emotion while singing ... and this is certainly one. It's always powerful.