Continuing the series on hymns, this is number twenty-six.

I arrived at Royal Lane in the winter of 2003 just as the country began the war in Iraq, so our Lenten theme that year was "Reconciliation" as we longed for exactly that in the midst of such a confusing time.

Our Ash Wednesday service began with:

Sunday's palms are Wednesday's ashes as another Lent begins;
thus we kneel before our Maker in contrition for our sins.
We have marred baptismal pledges, in rebellion gone astray;
now, returning, seek forgiveness; grant us pardon, God, this day!

The palms from Palm Sunday the year before are to supply the ashes for this year's Lent, a helpful symbol tying the years together.  The rest of this hymn is filled with confession for sins, particularly focused on ways we have failed to love our neighbors. 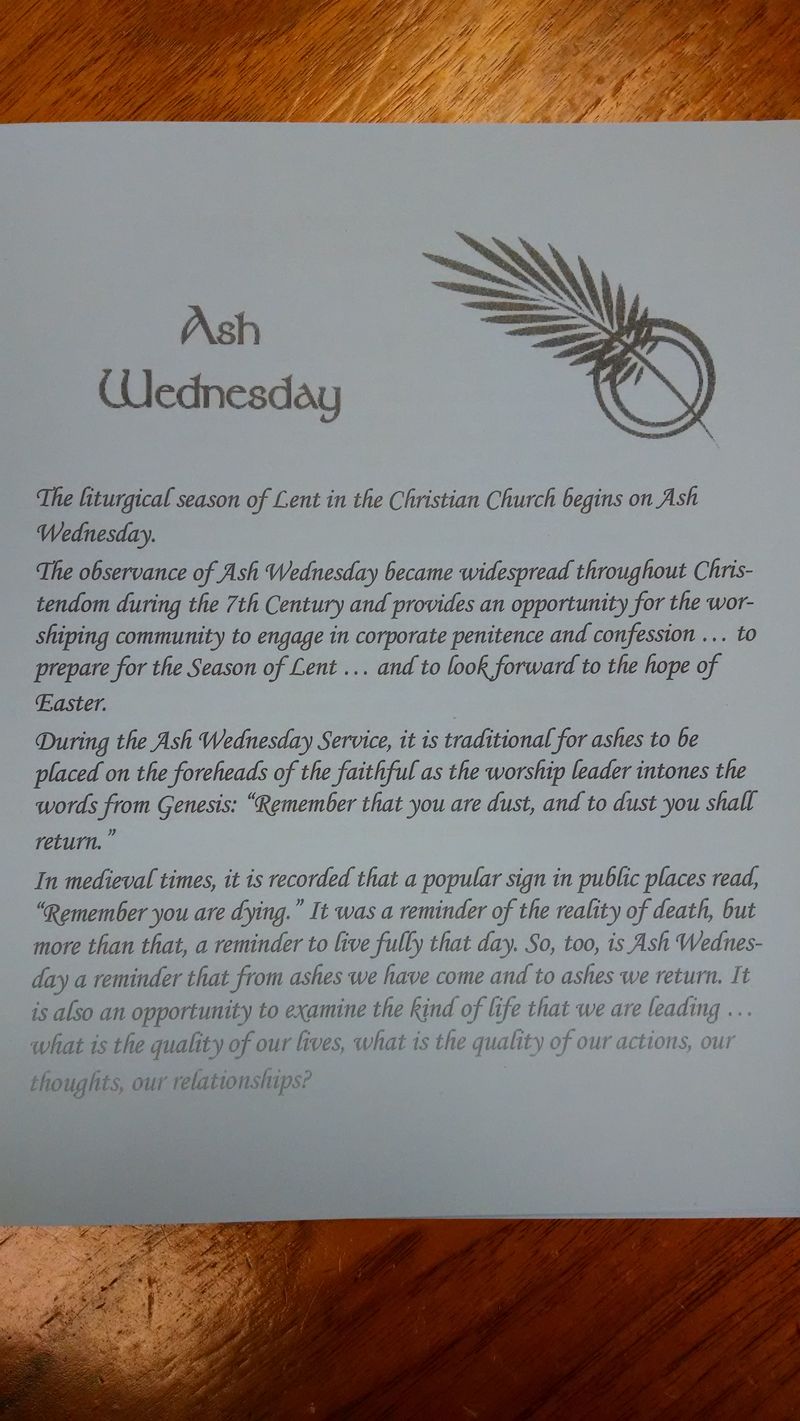 As part of that annual Royal Lane Ash Wednesday service, Harry prompted the congregation to make some "Lenten Resolves."  More than simply giving something up, these were resolves to worship in a different way, to educate ourselves about something and to do without something "for the sake of the poor."  The service concluded with:

Lord, who throughout these forty days for us did fast and pray,
teach us with you to mourn our sins and clsoe by you to stay.

It is the final two verses of this hymn which are most striking:

And thro' these days of penitence,
and thro' your Passiontide,
forevermore, in life and death,
O Lord with us abide.

Abide with us, through this life
of doubts and hope and pain,
an Easter of unending joy
we may at last attain!

A third I sometimes use:

Savior, when in tears and dust, low  we bow to you in trust,
When repentant, to the skies scarce we lift our weeping eyes,
Mindful how you suffered pain that God's love in us might reign--
Help us claim what we would be, hear our solemn litany.

This one contains some vivid imagery and words now often used in hymns.  Here is the fourth verse:

By your deep expiring groan, by the sad sepulchral stone,
By the vault whose cold abode held in vain the rising God:
O from earth to realms of light, Christ restored in power and might,
Listen, listen to the cry of our solemn litany.

The phrase "held in vain the rising God" is a delight.  I also enjoy "O from earth to realms of light."

One of the rousing Lenten hymns, and one that I have enjoyed but find in the last couple of years I enjoy it less, is "Lift High the Cross."

Lift high the cross, the love of Christ proclaim;
Let all adore and praise that sacred name.

Come, Christians, follow where our Savior trod,
the Lamb victorious, Christ the Child of God.

So shall our song of triumph ever be:
praise to the Crucified for victory.

Palm Sunday generally opens with the great hymn, "All Glory, Laud, and Honor" which I now realizes has more varied settings in different hymnals than I ever noticed before.  Here is how I grew up singing it:

All glory, laud, and honor
To thee, Redeemer, King,
To whom the lips of children
Made sweet hosannas ring:
Thou art the King of Israel,
Thou David's royal Son,
Who in the Lord's name comest,
The King and blessed One.

The first verse appears this way in the New Century Hymnal, and is preferable:

All glory, laud, and honor to you, O Christ, we sing,
to whom the lips of children made sweet hosannas ring!
The people of the Hebrews with palms adorned your way;
our prasie and prayer and anthems we offer you this day.

At Rolling Hills the entire congregation was invited to gather in the fellowship hall and we then processed into the sanctuary waving our palms.  At Royal Lane Palm Sunday was filled with exuberance as the children, youth, other adults, the full choir, and all the ministers made a grand processional down the aisles while the congregation waved their palms.  I vividly remember David Gonzalez getting into the spirt by skipping round and round the pews.  At CoH there was some good palm waving, but few children to excite the moment.  At First Central we've got the kids and they bring some flair to the moment, but many of these Midwestern Congregationalists seem unsure of what to do with their palms and don't bring much excitement to the moment.  Here, we are more likely to use "All glory" later in the service, and begin instead with:

"Hosanna, loud hosanna," the little children sang;
through pillared court and temple the lovely anthem rang;
To Jesus, who had blessed them close folded to his breast,
the children sang their praises, the simplest and the best.

I suddenly realize how weak that first verse is.  Better is the third:

"Hosanna in the highest!" That ancient song is ours.
We hail our great Redeemer and sing with all our powers:
"Hosanna, Christ, we praise you with heart and life and voice.
Hosanna!  In your presence forever we'll rejoice!"

At Royal Lane we didn't do Maundy Thursday, instead having our regular Wednesday night supper and service and the really big Good Friday service (that I'll get to in the next post).  At all the other churches I served we did do Maundy Thursday (either with or without doing Good Friday).  Of course it is always fitting to do communion hymns on Maundy Thursday or some of the hymns pointing toward Good Friday.

One that can work well is "An Upper Room Did Our Lord Prepare."  I'm mostly fond of the third verse:

And after supper he washed their feet,
for service, too, is sacrament.
In Christ our joy shall be made complete:
sent out to serve, as he was sent.

More common is "Go to Dark Gethsemane," which appears as "Journey to Gethsemane" in the New Century Hymnal.

God to dark Gethsemane,
Ye who feel the tempter's pow'r;
Your Redeemer's conflict see;
Watch with him one bitter hour;
Turn not from his griefs away;
Learn of Jesus Christ to pray.

Journey to Gethsemane,
go and feel the tempter's power;
Your Redeemer's conflict see,
watch the anguish of this hour;
Do not hide or turn away:
learn from Jesus how to pray.

I think I generally like the more recent adaptation better, though it does lose a couple of things that commend the traditional version.  In particular, I like the traditional line in the second verse "O the wormwood and the gall!" which becomes the somewhat less effective but still vivid "Crowned with thorns and mocked by all."

There is emotional power at the close of the third verse "Learn from Jesus how to die."

Perusing that verse, I just noticed an interesting theological difference between the traditional:

Mark that miracle of time,
God's own sacrifice complete

And the adaptation in the New Century Hymnal:

Mark the miracle of time,
God's own Child is sacrificed

Oddly, that adaptation participates in a version of the atonment theory roundly criticized by many feminist and womanist theologians (among others).  It contributes to the idea of the crucifixion as cosmic child abuse in a way that the traditional version does not.

And that seques us nicely to Good Friday, which I'll cover in a separate post.