As my hymn series continues, I've reached the thirty-second post.  A recent one discussed some other Easter hymns and said a later post would more fully discuss Easter.  This is that post. 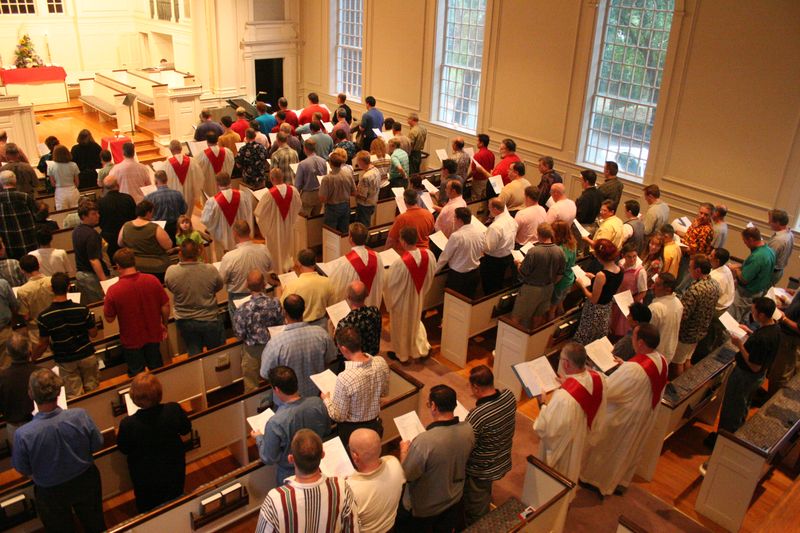 On April 3, 2005 I preached my candidating sermon at the Cathedral of Hope in Oklahoma City.  It was the Sunday after Easter when the Doubting Thomas story is the gospel for the day.  The sermon I preached was entitled "Resurrection People."  Here is an excerpt from the closing paragraphs:

All who have gone through suffering can give insight into resurrection. But I think we have something special to say. We who are gay and lesbian have gone through an experience that our heterosexual sisters and brothers haven’t gone through. We have an extra rite of passage, an extra step in life’s journey. You see we have experienced our Good Fridays. Some of us have lain in the tomb for decades. But, at some point we have grabbed hold of a new life. We have claimed a new hope.

And what a journey it was. Despite anxiety. Despite fear. Despite a path that seemed fraught with danger on every side. Despite a world full of many that would rob us of our dignity and break us. We came out. Despite all, don’t you also remember the excitement, the joy, the new sense of self-awareness, the new confidence?  The timid early steps give way to pride. And suddenly we find ourselves at the dawn of a new day, entering new life. . . .

These stories, our stories, are stories of resurrection.

Will Willimon said that the best witness to the doubting Thomas’ is “a group of people.” “A group of people whose life together is so radically different, so completely changed from the way the world builds a community, that there can be no explanation other than that something decisive has happened in history.”

. . . Dare I say that we can be that group of people? Dare I say that we already are that group of people? I think we are because we begin with one simple claim – that absolutely everyone is welcome at this table. I think we begin where Jesus began. The multitudes will not be sent home hungry. No, they will experience extravagant grace, radical inclusion, and relentless compassion.

When someone asks, “Has he risen?” may the life we live together be the answer that says “Yes!”

So it is within the context of my ministry at the Cathedral of Hope that I must write about the hymns of Easter.  Not because I learned these hymns a decade ago, for I've sung many of them my whole life through.  And it's not because CoH-OKC had great Easter traditions, for the churches I served in Fayetteville and Dallas had Easter traditions I still miss (and wrote about some of them here).  Nor is it because we had the most sublime Easter worship (our choir anthem was never Beethoven's "Hallelujah Chorus," my favourite Easter anthem, though Robert Fasol could draw an amazing Vidor's "Toccata" from the First Unitarian Church pipe organ).  No, I write about Easter from this context because it was there at CoH that I felt the most clearly in my life that I was among Resurrection people and that my ministry was each and every day tied to the eschatological hope of the Christian faith.

The day of resurrection!
Earth, tell it out abroad;
the Passover of gladness,
the Passover of God.
From death to life eternal,
from death unto the sky,
our Christ has brought us over
with hymns of victory.

My theology had developed toward liberation, fully flowering in that direction while serving in Oklahoma City.  Coupled with that was an emphasis upon Easter as new creation.  It is the third verse of this, my favourite Easter morning hymn, which makes clear the connection.

Now let the heavens be joyful,
let earth its song begin,
the whole world keep high triumph,
and all that is there-in;
Let all things seen and unseen
their notes of gladness blend,
for Christ again has risen,
our joy that has no end.

Of course there is the standard hymn that has probably been the processional hymn every Easter Sunday of my life:

My first Easter at CoH-OKC I tried something I had learned while serving in Fayetteville--inviting people to bring bells to ring every time that the word Alleluia was said or sung.  It didn't work so well at CoH, as people found it odd.  But I have seen it work.  David Breckenridge told of one a story of a different church where one of the members brought a cow bell and sat next to the aisle so he'd have plenty of room to swing it at each Alleluia.

I like to close the service with "Thine Is the Glory" and its rousing Handel tune from Judas Maccabeus.  Because the New Century Hymnal of the UCC has such a weird aversion to stately language, it becomes "Yours is the glory," which I don't think I've ever sung.  Here at First Central we always sing it, then, from our red, traditional hymnal which actually uses the title "Thine Be the Glory," which, in some ways, is even more fun as there is nothing like adding a little pomp and formality to Easter.

Thine be the glory, risen, conqu'ring Son;
endless is the vict'ry thou o'er death hast won.
Angels in bright raiment rolled the stone away,
kept the folded grave clothes where thy body lay.

Thine be the glory, risen, conqu'ring Son:
endless is the vict'ry thou o'er death hast won.

And here's a photo of Easter singing at First Central. 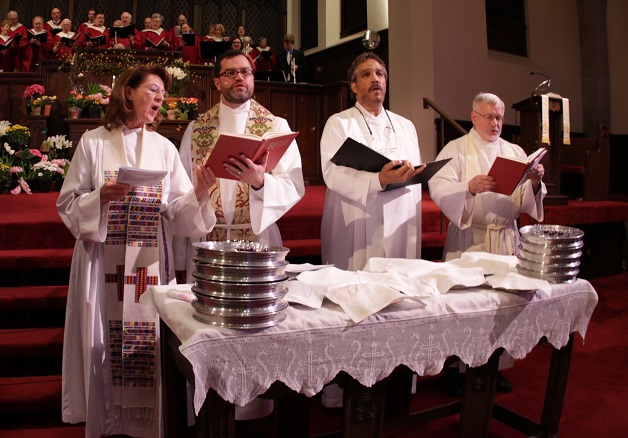