This was the poem for today from poets.org

What you have not done
is without error. What you
have not said is beyond contradiction.

What you understand of God
was yesterday. Today a bicycle
waits, chained to a bench.

The success of this afternoon’s nap
is the dream of lifting seven boxes,
your week, sealed with clear tape.

They stack, three to a column,
with the seventh like a capstone.
What you do not know they contain.

What you have not done
is without error. What you
have not said is beyond contradiction.

What you understand of God
was yesterday. Today a bicycle
waits, chained to a bench.

The success of this afternoon’s nap
is the dream of lifting seven boxes,
your week, sealed with clear tape.

They stack, three to a column,
with the seventh like a capstone.
What you do not know they contain.

I've also been reading Stanley Hauerwas' latest book Approaching the End: Eschatological Reflections on Church, Politics, and Life.  Riding in the passenger seat of the car on Christmas Day, I read the essays "War and Peace" and "Bearing Reality."  I was overwhelmed by them and had to shift to fiction at that point because my brain couldn't think anymore on that level.

In the first essay he writes about how we don't even really know what war is.  He criticizes the liberal, Kantian notion that we can create a rational society devoid of war.  He, of course, recommends Eucharist as the Christian alternative to war.  But this essay deserves reading, as any summary I might attempt will fail to do it justice.

The same for the essay "Bearing Reality" which is, ostensibly, about J. M. Coetzee's novel Elizabeth Costello and its philosophical implications for the limitations of rationality in the human project.  Our moral and rational projectst can be ways to avoid the difficulties of reality.  The church should be the place that reminds us that reality is difficult to bear and will get even worse if we are living faithfully and authentically.  The church also assists us in bearing that reality.  Here is a key section:

The difficulty of being a creature wounded by sin is forgotten.  Indeed, we forget or deny that we are creatures subject to the illusions we create to insure our significance.  As a result, we lose the necessities that create imaginative alternatives that make it possible for us to live without denying the difficult task of acknowledging our humanity and that of our neighbors. 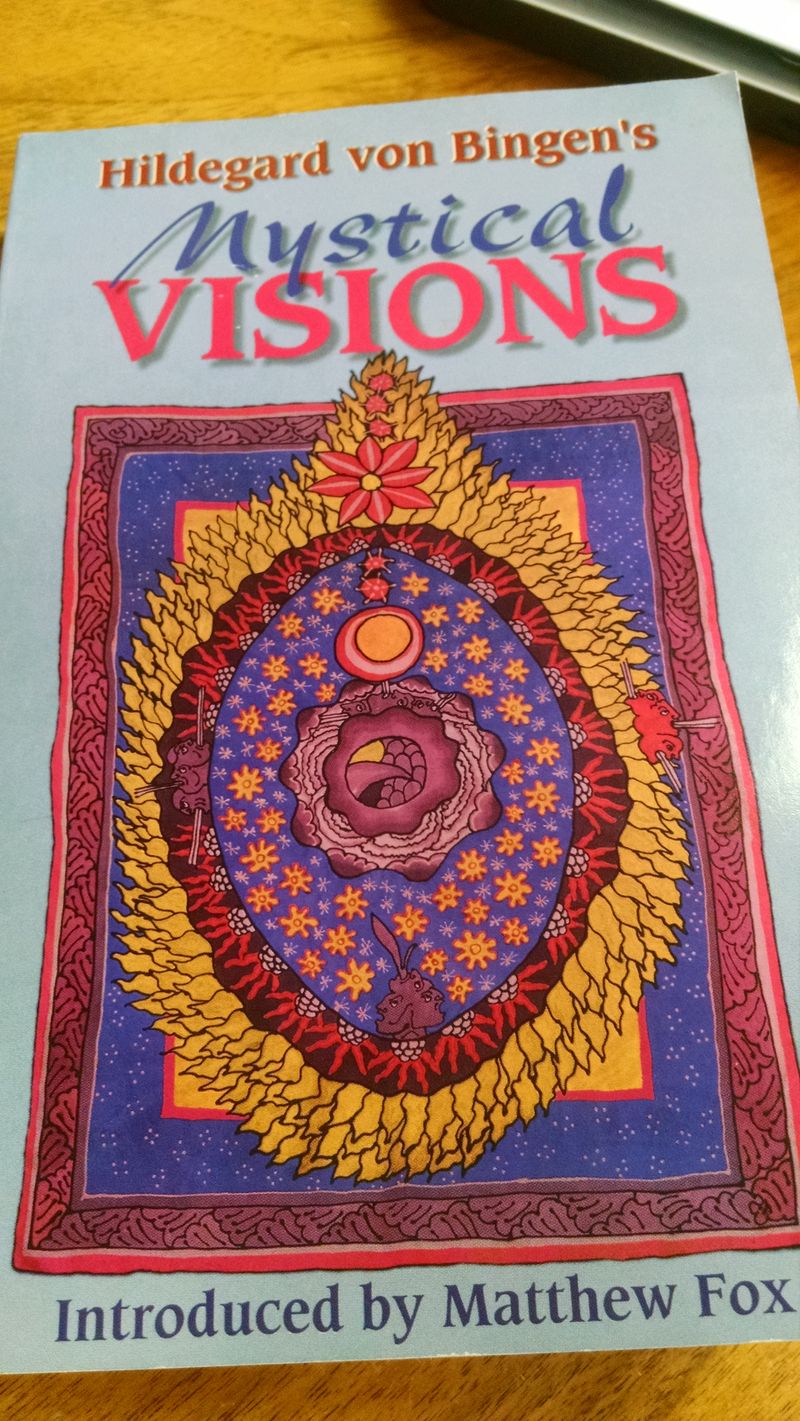 Some time back I began reading Hildegard of Bingen's visions recorded in the Scivias.  I must admit that this has been slow going, with me reading a portion here and there.  Today I completed Part One and have some observations to make.

Much of the difficulty is with reading medieval, mystical visions.  The style can be alien and off-putting.  That said, there are some beautiful turns of phrase in this translation by Bruce Hozeski.  Here are some examples: "the brightness of blessedness," "the beauty of the rationality that is inside themselves," "the grace of pleasantness," "the soul breathes the senses forth," "a very great and peaceful brightness."

But there are awful, offensive passages such as, "God burns everywhere through the fire of divine punishment those people who are outside the true faith."  Or "Why are they evil?  Because they wish to know those things which should not be known by them, thereby imitating the devil who desired to be like the Highest."

Despite that last phrase which condemns intellectual curiosity, there is much emphasis on thinking and reason as manifesting our human beauty, the divine image.  I really enjoyed this phrase, "a person flies swiftly with his or her own thinking."  Our soul should "investigate things in the same way that wheat is separated from the chaff."

In the second vision of this first part, she asks, "How can you abide without trying out your image and likeness?"  "How could the very great glory and honor that was given to you go unused as if they were nothing and not motivate you at all?"  After all "I am the living breath which God sent into dry dust."  She writes that those who "cast aside all the uselessness of their evil ways . . . have been made brighty by these virtues."

When we use our reason, we do "works of light" and radiate with a "brightness similar to the dawn."

On our tree hangs a sparkly, red elephant. 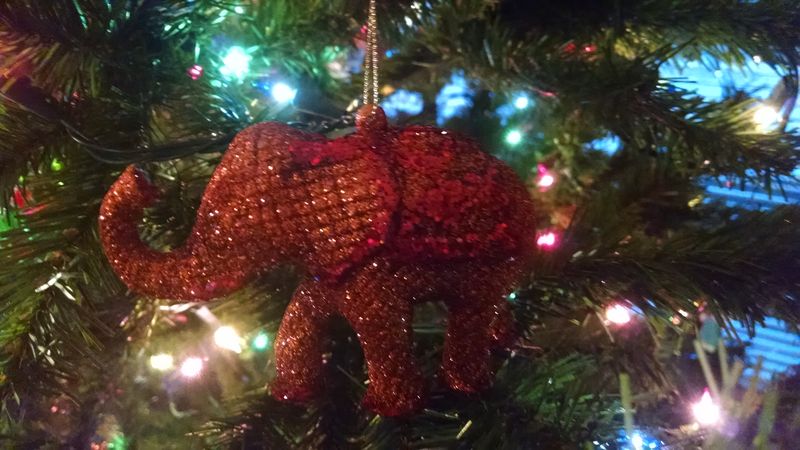 I forget exactly where we found this ornament, but we knew immediately we needed to buy it.  The reason is that Michael's Mom collects elephants.  In her home are display cabinets filled with all sizes and types of elephants.  Whenever Michael sees one, he thinks of his Mom.

My mother-in-law, Ninfa Cich, is a hard-working woman.  She is an immigrant from the Philippines who has often worked three jobs at a time while also running the family business back home.  She has used her money to put all of her nieces and nephews through college and to otherwise support the family back home.  Despite all this hard work and surviving cancer, she is still petite and beautiful in her mid-60's.

Michael decided when our niece Zoe was born that she would also be into elephants.  Every year we've gotten her some sort of elephant-themed gift.  This year it was a comforter and sheet set with pink elephants on it (along with yet another stuffed elephant).

So, every December, as we admire our tree, the red elephant reminds us of Michael's Mom.

Every year there is an official White House ornament that is sent out to probably hundreds or thousands of people.  We have the official ornament for 2006. 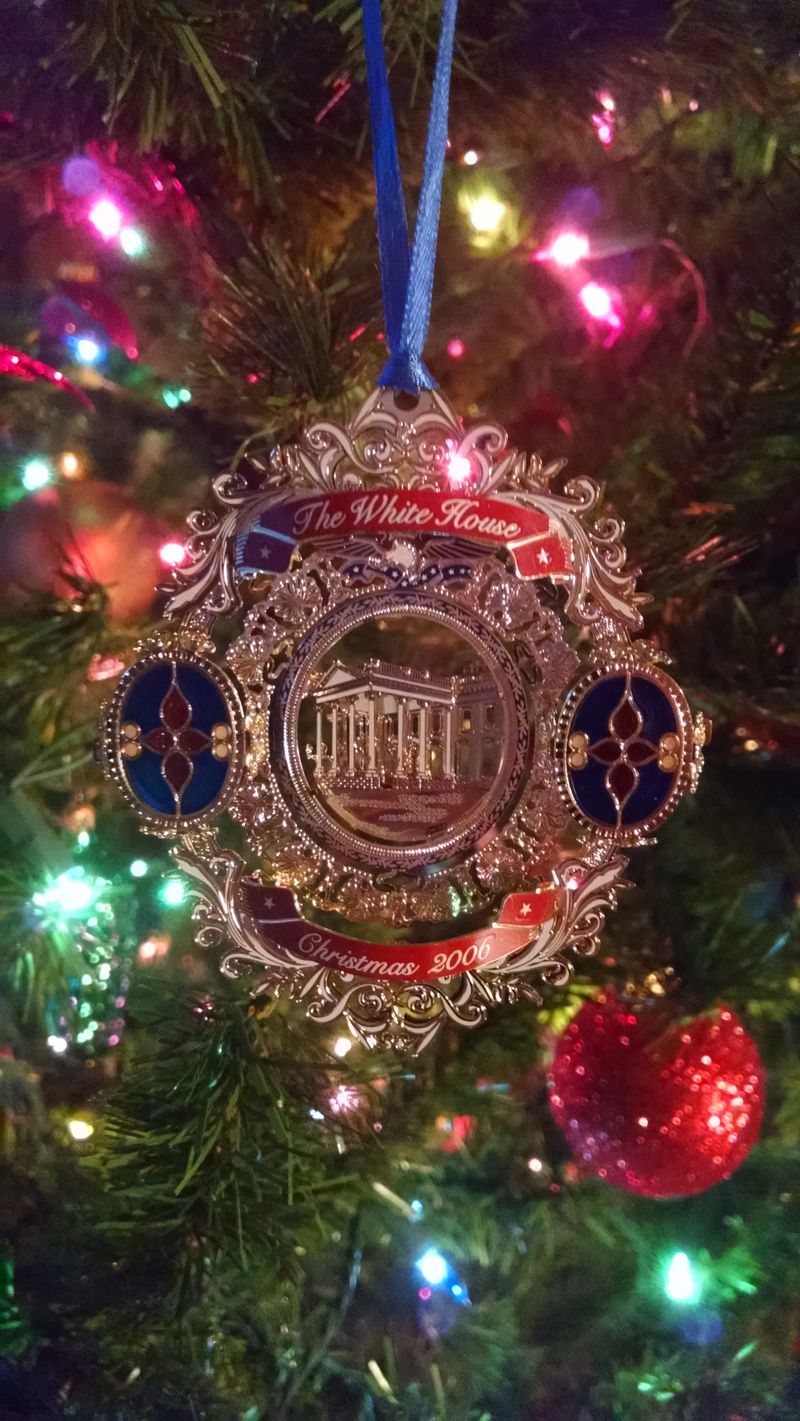 Not because we were big donors to George W.  Michael worked for a part of the university which handled all sorts of government contracts.  The agency received the official ornament every year, and that particular year Michael's boss gave it to Michael.

It's a beautiful ornament, though we don't particularly care for it reminding us of the occupant in 2006 every time we are decorating our tree.

This drum is one of many ornaments that were given to me by Mrs. Reed. 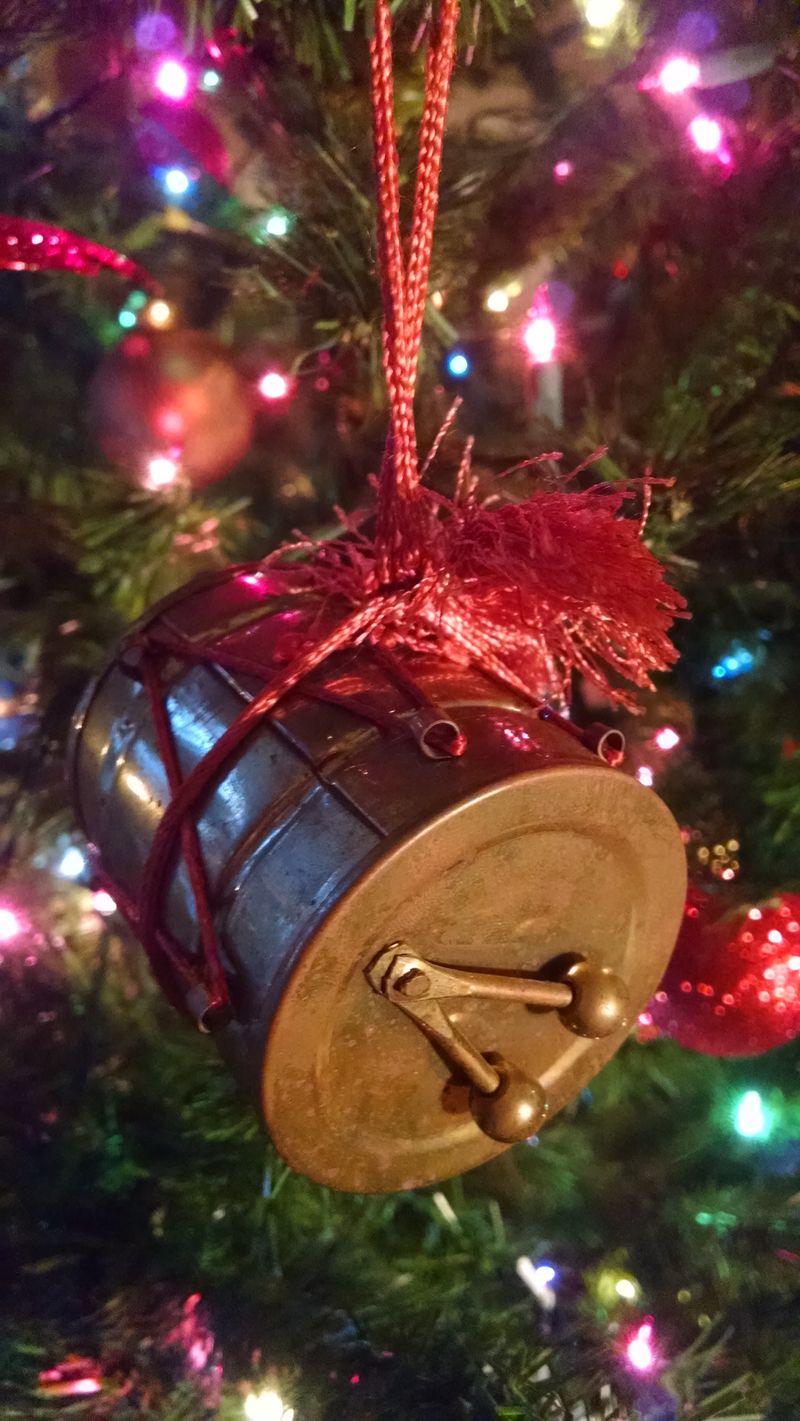 Mr. & Mrs. Reed were the next door neighbors to my Nixon grandparents.  Every year Mrs. Reed gave me, my sister, and my cousin Gretchen a nice ornament for Christmas.  In a time when many of our ornaments were handmade, Mrs. Reeds were always more elegant (glass birds, for instance).

We rarely saw Mrs. Reed.  She wasn't very social.  She had a small backyard, but it was an intricate, manicured garden.  Turtles lived there that she took care of.  Only three or four times do I ever remember entering their well-kept home.  If we did see her, she would call out from her front porch, and we would call back from my grandparents' front porch.

She was a nice lady who chose to be generous to her neighbors' grandkids.  And now I think of her every year when I decorate the Christmas tree.

Every year when we were kids Mom planned some sort of ornament-making activity.  There used to be a bunch of dough ornaments (those all went into the garbage bin some decades ago).  There were ones we stuffed and she sewed, ones we painted, etc.  I've still got a handful of those, though they almost never make it onto the tree.  I'm saving them for the "kids' tree," I guess.

There were also ornaments crafted at church and at school, including this one of a bear. I made it in seventh grade in Home Economics class.  At Will Rogers Junior High if you weren't in band or chorus, then you took Block classes which changed each quarter giving you a little experience of Shop, Art, Speech, and Home Ec.

I guess I had Home Ec in the second quarter, as our sewing project was these Christmas ornaments.  It is the rare thing that I actually sewed.  And almost thirty years later it is still together!

The other day my sister posted to Facebook a photo from Christmas 1977 of me and Grandpa Jones. 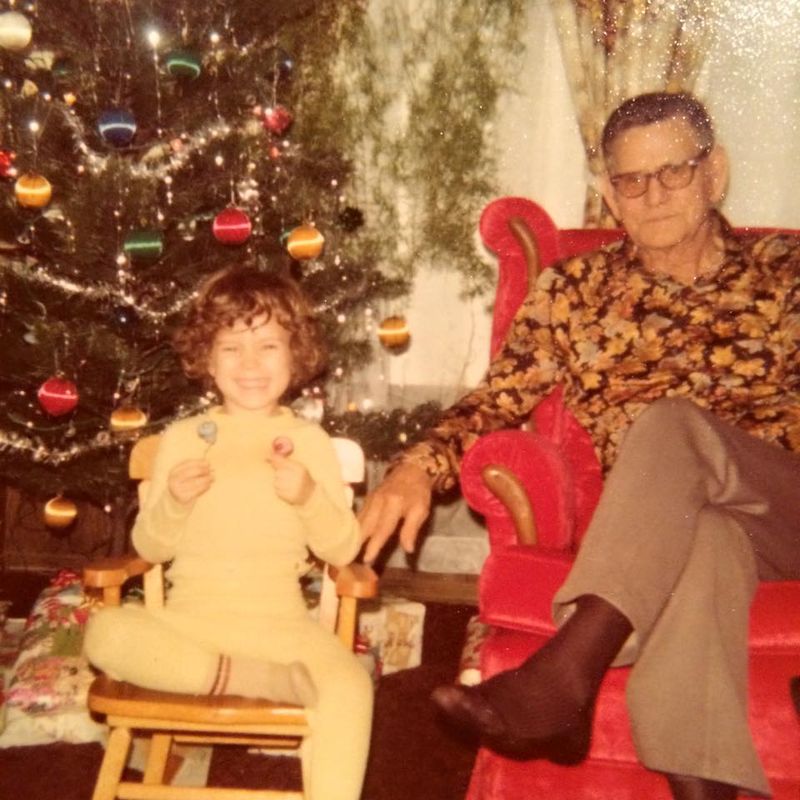 In the photo I'm holding a couple of bell ornaments.  These were among some of the first ornaments my parents ever purchased.  They are cheap little things.  The hangers are basically little twisties that you hook over the end of a branch.  The bells themselves have a fuzzy felt-like feel.  They do not tinkle.

My parents purchased them when they were a young married couple living in Honolulu.  They adorned their first tree, which was a three foot table top tree.  It was also bright white, back when those were first in style.

They purchased the tree and ornaments right before Thanksgiving.  After they had Thanksgiving dinner together, just the two of them, they put up the tree and the ornaments.  Then they changed into their swimsuits and went to the beach.  Mom always delighted in telling that story.

This tree was still around when Kelli and I were kids.  Being bright white it looked out-of-date and kinda dorky, but was fun for us kids.  It was always our tree to decorate and play with, including all the old ornaments.

There are only a few of the bells left.  I make sure that at least one every year finds its way onto our tree as a reminisence of my newlywed parents and their Hawaiian Christmas. 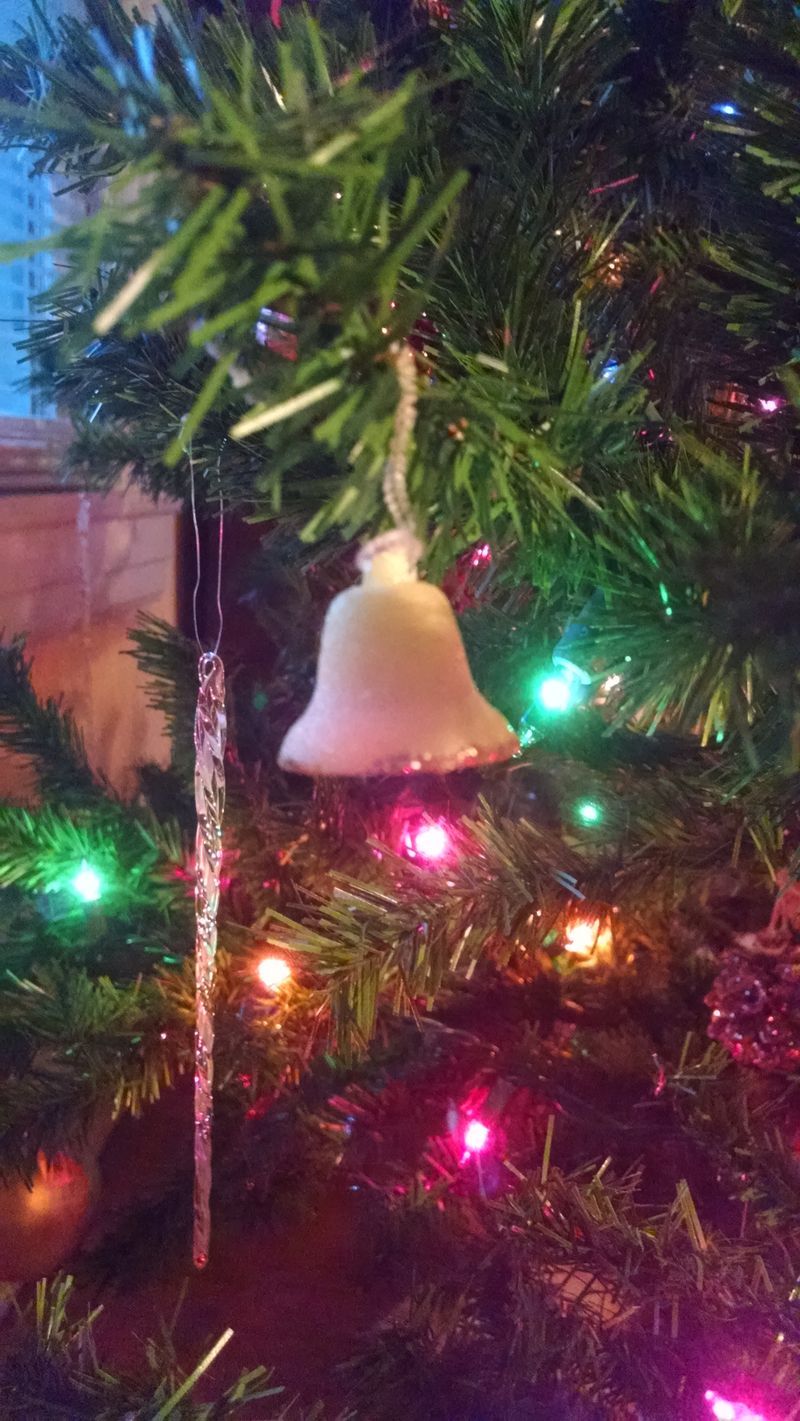 Roth on the hypnotic materiality of the world

From Philip Roth's speech in Philip Roth at 80 these two paragraphs stood out to me:

In my defense, however, I should insert here that remembering objects as mundane as a bicycle basket was a not insignificant part of my vocation.  The deal worked out for me as a novelist wasthat I should continuously rummage around in memory for thousands and thousands of just such things.  Unlikely as it may seem, a passion for local specificity--the expansive engagement, something close to  fascination, with a seemingly familiar, even innocuous, object like a lady's kid glove or a butcher shop chicken or a gold-star flag or a Hamilton wristwatch, according to Poppa Everyman the Elizabeth, New Jersey jeweler, "the best watch this country ever produced, the premier American-made watch, bar none."

I was saying that this passion for specificity, for the hypnotic materiality of the world one is in, is all but at the heart of the task to which every American novelist has been enjoined since Herman Melville and his whale and Mark Twain and his river: to discover the most arresting, evocative verbal depiction for every last American thing.  Without strong representation of the thing--animate or inanimate--without the crucial representation of what is real, there is nothing.  Its concreteness, its unabashed focus on all the particulars, a fervor for the singular and a profound aversion to generalities is fiction's lifeblood.  It is from a scrupulous fidelity to the blizzard of specific data that is a personal life, it is from the force of its uncompromisingparticularity, from its physicalness, that the realistic novel, the insatiable realistic novel with its multitude of realities, derives its ruthless intimacy.