Post eleven in a series I'm writing as I listen through our (mine and Michael's) cd collection in alphabetical order.

Michael and I were in Dallas for the weekend.  I don't remember what year it was, much less what particular reason took us to Dallas that weekend.  We were often there, for work and for pleasure and often both.  Dallas is an easy and common weekend for residents of Oklahoma City--a great chance for shopping, eating, clubbing, and more.  This particular weekend someone (was it Charlie Bates?) told us that Erykah Badu, a resident of the city, would be performing a free concert that night at one of the record stores in Lower Greenville.  "I want to go," Michael said.

Parking in Lower Greenville is almost never easy.  One usually has to drive up and down residential streets blocks from the restaurants, stores, and clubs in order to find a spot.  We grabbed dinner at one of the nearby eateries and I regaled him with boring stories of my own experiences in the neighborhood when I was a resident of Dallas.

Badu performed outside, on a temporary stage.  There were a few hundred people assembled.

Though I recognized her and some of the songs, I had never paid much attention to her music.  Neo-soul wasn't my thing in the mid-90's.  But this was now the era of Bush-hating, and she was primed for that.  Her words were deeply critical of the American imperial enterprise.  And the music was layered.  Her voice has often been compared to Billie Holiday, and it is an apt comparison.

The concert was ruined by two things.  One, she talked too much.  Plus she invited Bill Wisener of the famous Bill's Records to speak.  I wasn't completely sure why at the time.  The second thing that ruined it was that the police made her quit at 11 p.m. because of the sound ordinance.  So, most of the limited time had been ruined by the talking.  She did convince the police to let her do one more song acapella, which was probably the most magical moment of the night. 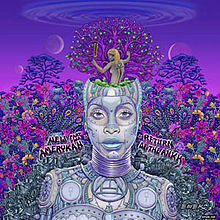 We only have one Erykah Badu album in our collection--2010's New Amerykah Part Two (Return of the Ankh).  I haven't listened to it very often.  There was a time I think it was in the car cd player for months.

Listening the last couple of days, I'm intrigued by the complex sounds, the mix of soul, hip-hop, and r&b with lots of creative sound effects.  The song I'm most drawn to is the final one "Out My Mind, Just In Time."  It begins as a blues ballad and then goes to multiple different places.

This video is just a snapshot--the opening minutes of a song that is over ten minutes long on the album.

One reviewer said that it "starts as a fairly boring ballad but gradually unravels into . . . tripped-out weirdness."  Another wrote "the three-part ballad . . . luxuriates in the exquisite confusion, recalcitrance, and reluctant independence that arrive in rapid succession, sometimes simultaneously."  Indeed.