When I was momentarily friends with a rock band

This is the fourteenth post as I listen through my cd collection.

It was Fayetteville, Arkansas in 2002, I was in my late twenties, and I was friends with a rock band.  They were a group of local guys named BE, headed by Talley and Mark Summerlin and they had just released a new album Thistupidream.  I met them through their cousin Ellen.  One of the things I regret in life is my friendship with Ellen.  We were originally set up on a date, as I was still a few years from coming out.  Fortunately, the relationship never developed romantically, but she and I did become friends, though that friendship faded when I moved to Dallas and then my life just moved in other directions.

I enjoyed Ellen's family.  She and her cousins had a huge group of friends and their parents and aunts and uncles would party with them as well.  It made me jealous really, for my family never had relationships with my friends like that.  They were also musical.  They would sing songs when they were together, songs of joy and blessing and honor.  My short time being a part of their large, warm family circle was one of the highlights of living in Fayetteville.  I was even the minister at Mark & Lucinda's wedding.

Ellen took me to hear BE at George's Majestic.  The music really connected with me.  It should have.  We were the same age group and had similar musical influences and likes. 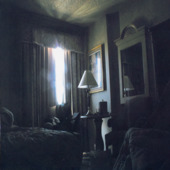 My two favourite songs (of many I deeply enjoy) on Thistupidream are the title song and the opening song "On the last day I was happy."

I remember the news droning, drowning
We were young and confused
Desperate, doubting
I remember the plans we were making
So much better than friends
Sleeping, waking
On the last day I was happy

I like the description of the album on iTunes:

Their brand of alternative guitar rock keeps the pulse light and moody, with splashes of lush rhythm guitar crunch added for tonal color. "On the Last Day I Was Happy" is a good example of the general approach: strong on melody with a decided millennial Brit-pop sensibility. The pose is more languid than aggressive, honing in on dreamy, introspective lyrics — although at times the band shows they are capable of rocking out.

It also says "Thistupidream sounds remarkable and demonstrated that Be was poised to make a grab at mainstream recognition."  That would have been great.  They disbanded in 2003.

Talley and Mark moved to Dallas a few months before I did in the winter of 2003.  One of my first social events in Dallas was hanging out with all of them again.

Tonight, looking them up for the first time in a decade, I see that Mark works with Seal and Talley has released solo material.

It is one of the sad facts of life that when one does move regularly for work, friendships are made and lost.