Our Son, Interlude: His Name

Let us pause in our narrative to discuss his name. 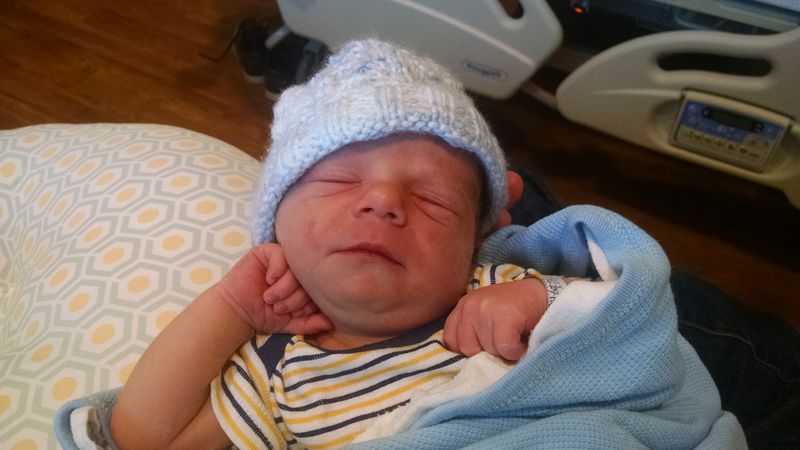 First off, the surname.  Jones is too common and too boring.  We also didn't want to saddle a kid with a hyphenated name.  Some years ago we read about how kids with hyphenated names get married (especially to another person with a hyphenated name) and then they don't know what to do and surely don't want to have a string of hyphenated names such that they begin to sound like a late 19th century German prince.  Cich is unique and interesting, plus there are a big bunch of Ciches, whereas at this point no Joneses that we are in relationship with because my sister's last name is Adams, my mother's last name is now Stanford, and my Dad was an only child.

Sebastian is simply a name that Michael and I have both liked for a long time.  I think Michael was the first one to mention it in conversation, and I immediately agreed to it.  I link it in memory to the crab in Little Mermaid, of course, but farther back to the boy in Neverending Story (a movie Michael and I both loved as kids).  Of course there is also St. Sebastian.  I'm often drawn to his images in art, and Michael and I saw many representations of him in our 2011 trip to Italy.

Interestingly, Sebastian was rare in America until the 1990's, so we Gen X-ers must like it.  Since then it has been on the rise, peaking in 2012.  Last year it was the 34th most popular boys name in the country, according to this website.  According to this one it is "global hit" currently ranking in the top ten in countries as diverse as Chile, Denmark, and Austria.  The same website says that it is a sophisticated name, which fits with current trends in US baby naming.

Some people have wondered about nicknames.  We aren't going to automatically pick one, assuming that a nickname (if needed) will arise on its own.  Some think Sebastian too long.  Well, if so, then this website lists 16 different nicknames and shortening of the name which are already common.  My preference has been for Basti.  His mom's mom calls him Bash.  And one of my friend's kids already calls him Bash Bash.

Briston is the middle name of one of my great-grandfathers, Arthur Briston Adams (which is a superb name).  I've always liked it and always wanted to use it and am glad that Michael liked it as well.  According to this website, there were only 3 Briston's born in the US last year.

He has a very diverse name--a globally popular first name that is originally Greek; a very English, old-fashioned middle name; and a surname that is an American shortening of a Polish-German name.

Our kids did grow up with hyphenated last names. The priest who baptized our first one, Johanna Ruth Owens-Ream told us to pick a name we liked and, because she was, after all, the child of two radical left wing activists, she would pick her own name when she grew up anyway. We picked Owens to come first because it sounded better than having Ream first - just try it yourself and it's obvious. Later the kids pointed out if you put a vertical line through the hyphen you get "Owenstream, " which is a great name. If we'd thought of that in 1974, we very well might have used it for all of us!
When she was 33, Johanna Ruth became Johanna Ruth Aron when she married Matthew Aron. She was happy to take a nice, short name after 3 decades with a long last name. The only problem with Aron is that people want to spell it Aaron. But Matthew is Jewish and they are raising their son Jasper Jewish, and Johanna Ruth Aron is a great Hebrew name, as was pointed out by the marvelous rabbi who married them.
Both boys have taken Owens as their last name, for some similar reasons to your choice of Cich. There are zillions of Reams, including dozens from Rick's dad's extended family, and 2 boys to carry "Ream" from Rick's dad, as his brother has two sons, one of whom already has his own sons. On the other hand, my dad was an only child and my brother has no children, so my boys are the on,y ones to carry on Owens from my dad.
Our older son was named Daniel Joseph Owens-Ream, always with the intention to call him "Joe." Both names are for real-life men of importance to us as well as for the Old Testament characters. But Joe is from the priest who pronounced the blessing on our marriage and entered it into the wedding registry at St. Julia's Church in Austin. He was an activist priest who died way too young while I was pregnant with Joe. Joe has chosen as an adult to drop the "Daniel" completely and to be Joseph Ream Owens.
Our younger son was named "Richard John Owens-Ream," always intended to be called "John." Rick is Richard John Ream, Jt., and my bother is John Thomas Owens. As an adult, John has legally changed his name to John Richard Ream Owens, which is J. R. R. Owens, in homage to his beloved J. R. R. Tolkien.
Just as Fr. Moser predicted, all our children have chosen their own names.

Reading this made me think about Bash Bish Falls State Park, on the border of NY and Massachusetts. You'll have to take a family trip someday!

Crazy, but we will be in Hudson, NY with him in September because I'm doing a wedding. It is 37 minutes away.

Bash Bish is a great place - we used to backpack in to camp in the area and then hike to the falls.
There is also a Bish Bash falls somewhere else in New England - maybe Maine.