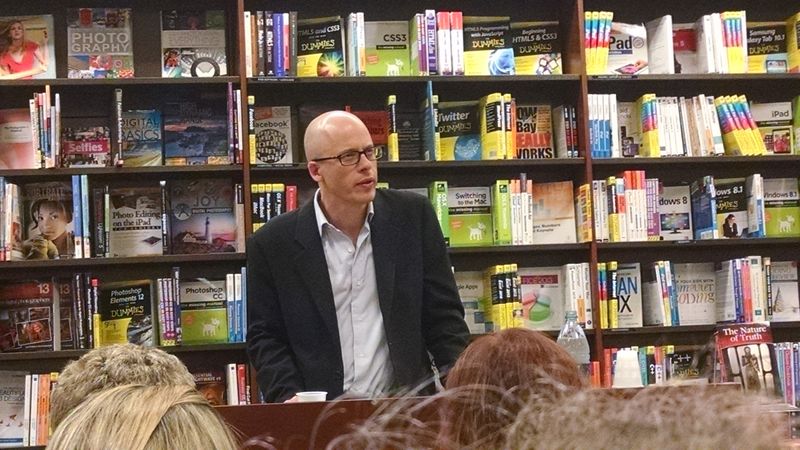 "Fantasy is a way to re-encounter what we struggle with in the real world," said Lev Grossman today in Linsly-Chittenden Hall with the Tiffany window looming nearby.  He admitted the intimidation of returning to speak at Yale where he had been a graduate student.  His nervousness apparent in his personal ticks, like buttoning and unbuttoning his jacket.

He referenced his depression in his lecture and was asked if he would talk about it during the Q&A.  "Yes.  You'll find I'm very confessional about it."  He continued, "People romanticize depression.  It is not where my fiction comes from.  Depression should be treated aggressively.  I was more productive as a writer after therapy and medication."

"The Lion, the Witch, and the Wardrobe taught me what novels are for.  And every time I've read the book after that first time as a child has been an echo of that primal experience" (here's a link to an article by Grossman on Lewis).  I resonated, for the Chronicles of Narnia have served a similar function for me.  Narnia represents a spiritual idea and ideal, luring me onto my best.  Which is why Grossman's The Magicians fucked with me so.  Then I preached about the novel.

Grossman had written and published for fifteen years without finding his authorial voice and began to believe that such a thing was a myth that other writers made up.  Then, in a conversation with Philip Pullman on what Pullman loathes about Lewis, he was awakened to the possibility that one could write a novel about the magic of adulthood instead of the magic of childhood.  And that he could talk back to Lewis, including all the things that Lewis and others in that tradition leave out.  While also leaving out of his story all the obvious organizing and meaning-making characters (no Gandalf, no Voldemort) because those were absent from his life.  As a young man he had to figure meaning out on his own.  Every day he didn't awaken with the task of vanquishing some evil force.  Real life was more complicated than that.

So, he wrote The Magicians literally sitting between a copy of The Lion, the Witch, and the Wardrobe and Jonathan Franzen's The Corrections, aiming for Franzen's realistic style in describing the fantasy world of his novel.  (Here are the passages I copied down from Grossman's novel when I read it in 2013).

You might remember that I didn't like the ending of the novel.  I thought it drew back from the obvious end of the story--Quentin dying of acedia.  Grossman confessed today that he didn't go far enough in the novel.  I hope I get the opportunity to ask him about that further tonight.  I have not read the sequels.

Two other good nuggets from his talk.  "Reading Mrs. Dalloway is why I stopped being a chemistry major.  It is the greatest novel of the twentieth century."

Another was his discussion of George R. R. Martin, and the radical thing he did in the novel Game of Thrones using realism to write about this fantasy world.  Right now I'm reading Martin's Feast of Crows, the fourth novel in the Song of Fire and Ice series.  Martin is a skilled writer.  I stand in awe of some of his paragraphs (I should share some excerpt here, but I don't have my copy with me at the moment).

Reflecting on Grossman's discussion of Martin, I realized part of what is missing in this season of the TV show and maybe one reason the season is unsatisfying.  Martin enriches his story with common folk.  Earlier seasons of the show allowed us to encounter this world through the stories of a prostitute and a smith, but those common folk as rich characters are largely missing this year.  There appears to be less realism this year and more fantasy.  Which fails the test of what Grossman stated in his lecture "Fantasy is a way to re-encounter what we struggle with in the real world."