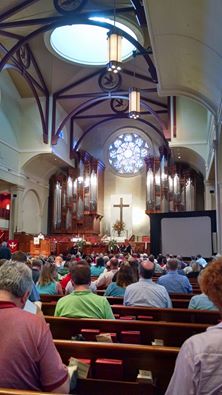 Yes, spending a week with 1,200 other preachers listening to sermons and lectures on preaching is church-nerdy.  I first attended the Festival of Homiletics in 2006 with the Rev. Dr. Jo Hudson, then my boss as Senior Pastor of the Cathedral of Hope in Dallas.  That year the festival was also held here in Atlanta at Peachtree Road United Methodist Church.  At the time I had hoped to attend every few years, but now a decade has passed.

The glory of attending in this church is the power of the congregational singing.  1,200 preachers sing out with gusto and the acoustics and the organ of this room make the singing enter into your bones.  I wish all those folk who stand without singing in congregation’s weekly would realize the visceral power of a congregation with everyone singing.

This morning I’m sitting in the balcony above the pulpit where Walter Brueggemann is about to preach.  Last night’s opening worship included a sermon from Ann Carter Florence, who was my favourite a decade ago. I missed some of the sermon, as it fell during my scheduled daily Skype time with Sebastian and Michael.  The sermon was included in worship service that I felt was surprisingly pretentious.  When we entered the building an usher team from the church was here and they were all in suits.  I said to my friends, I wouldn’t attend a church where all the ushers where suits. The processional took ten minutes of almost laughingly slow marching and included, I think, four processional crosses.  My friends said, “Last year’s opening worship was a bluegrass liturgy.”  I enjoy a high church experience, but last night’s teeter over into absurdity.

After worship the columnist Leonard Pitts gave a rousing address on why is it that the church is always behind on expansions of human dignity, usually apologizing a quarter century after.  The last time I attended I was surprised by a lack of boldness in addressing controversial issues, but not so this year, as Pitts set the theme of Prophetic Preaching for the week.  Will be interested to see how that plays out.

Among the other changes—the festival now has an app and the orders of worship are not printed but are on the app.