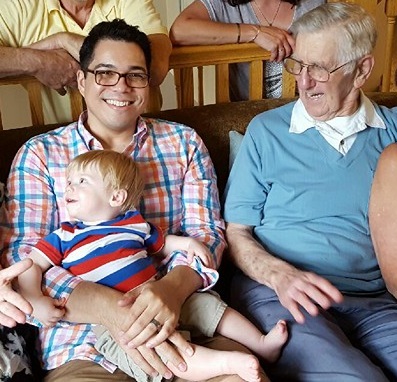 Michael’s grandpa Ted Cich died last weekend.  He was 91 years old.  He could still bicycle ten miles.  He died at home in his own bed during his sleep.  In other words, the way most of us would like to die.  He was a good man who lived a good life.

Ted and Marion raised a family of six rambunctious kids in the Minneapolis suburb of New Brighton.  They were hard working and devout Roman Catholics.  Two of their sons attended seminary, though neither ultimately became a priest.  They owned property on Blue Lake where, over many years, they built a cabin that was the site of many family vacations and to which they retired and lived until Marion’s illnesses drew them back to the city.

I met Ted and Marion in May 2009 one month before I married Michael.  They were gracious in their welcome of me into the family.  Their welcome stood in stark contrast to my own grandfather who reacted poorly to my coming out and even more poorly to my relationship with Michael.  Though my grandfather ultimately improved, with the Ciches there was no need for improvement; they were fully welcoming from the moment they met me.

Ted attended our wedding (Marion was unable to make the trip from Minneapolis to Oklahoma City, though she was always disappointed and little angry about that).  Not only did he attend, he insisted that every one of his children were to be present so that there could be no question where the Cich family stood.  My grandfather made a point of not attending and most of my extended family was not present.

Last year Ted came to Omaha for Sebastian’s baptism, hopefully some of you met him.  In May we traveled to Minneapolis to visit him and Michael’s extended family there.  Ted delighted in Sebastian, and we are grateful for the time they had together and the pictures we can share with Sebastian of him with his great-grandpa.

Ted and Marion Cich are evidence that being welcoming and inclusive are not generational traits.  They are traits of good people.