What the opposition needs

This article in Salon criticizes liberals for thinking there will be an easy Trump backlash, as the special election in Montana went for the violent bully as well.  But the author contends the left is focused on the wrong things, something I've been saying this year.  In fact, I've said almost this exact sentence, "My position is that Donald Trump is a symptom of the fundamental brokenness of American politics, not the cause."

For the Trump resistance to have meaning, it must be more than the handmaiden or enabler of a political party that has lost its power, lost its voice and lost its way. Electoral victories will come (and go), but we should have learned by now that they are never sufficient in themselves. Rebuilding and redeeming American democracy — if that can still be accomplished — is a much bigger job, and there are no shortcuts.

Fortunately, there are many on the right who also opposed Trump and believe the same thing, that he is a symptom of a far more serious problem with our society.  We can work together with those folk to repair the social fabric and moral character of our democracy, that is the most important project at the moment.  I find 2017 to be a great time for bipartisan cooperation in opposition the the national catastrophe of Trump.

First, an article in The Guardian recounts the hate crimes that occurred over the holiday weekend and ponders if Trump's vile rhetoric has empowered white supremacists in their violence.  An excerpt:

Some said it was hard to separate the weekend’s violence from the rhetoric of Trump who has bragged about sexual assault, joked about attacking his opponents and protesters and made racially prejudiced remarks about Muslims, Mexicans, African Americans, indigenous people and other minorities.

And a column by John McCain's former chief of staff Mark Salter discussing the fight at the baseball game in the larger context of the loss of humility and moral character in our nation, signified again by Trump:

The president whom Schlichter defends for the sake of discomfiting liberals  is the exemplar of a life bereft of a purpose higher than avenging slights, real and imagined. He’s 70 years old, and exhibits the thoughtfulness, impulse control and empathy of a middle-school bully. Trump desperately insists he is great, fantastic, the best – apparently to keep his insecurities at bay. Making his aides offer fulsome tributes to his make-believe gloriousness like they were North Korean newscasters. Blaming subordinates, the media, the “deep state” for the predictable consequences of his own boorish behavior.

Trump is deficient in so many virtues, but the most glaring deficiency is an inability to be humble.

Without it we cannot find satisfaction beyond fleeting pleasure or a feeling more motivating than anger. Whatever our talents and achievements we are merely the sum of our resentments and insecurities. We cannot really love others. We cannot fix ourselves. And the men and women whose sacrifice we are meant to honor on Memorial Day are a rebuke to our wasted life.

I Do Not Do the Good I Want

It is precisely because the social world provides raw materials for private dreams that dreams can help us to think about society. Dreams are not, in other words, an escape from reality, but rather another way of thinking about what ‘reality’ in social and political life actually means.

A provocative essay on Aeon about American dreaming.

"False decency without a hint of grace"

A column in Haaretz takes Trump's gaslighting trip to Israel to task. An excerpt:

It speaks, I think, to the ultimately superficial quality of this man and his government.
At its core there are no beliefs, only a series of empty gestures at a false decency without a hint of grace. While Trump was in Israel, more details emerged of one of the most savage programs of domestic austerity in the modern history of the United States, supposedly the richest country of the world.
read more: http://www.haaretz.com/opinion/1.791445

Posted at 09:52 AM in Current Affairs, Foreign Affairs | Permalink | Comments (0)

What Are People For?

What are People for?: Essays by Wendell Berry
My rating: 4 of 5 stars

I first encountered Wendell Berry in freshman English at OBU. The essay we read seems to be in this volume, "Word and Flesh" (at least this essay makes the same points I remember from 1992). At the time I disagreed with him, particularly that problems, including environmental problems, cannot be approached globally but can only be addressed locally.

I came back to Berry near the turn of the millennium, when I read his poetry and fell in love. The poetry invited me into the essays, and Berry has been one of the most significant influence on my thought.

But his ideas are rarely easy for me. In fact, they are quite difficult. He is not a writer I read for confirmation of my own ideas, but to convict and challenge me. Whenever I read him, I am reminded of my hypocrisies and moral failures.

Back in 2004 I considered following Berry's advice and abandoning my life and career and moving to a poor small town to become a teacher and grow much of my own food. I didn't do that. I came out, and gay life led in a very different direction. Though I did have friends who did something of the sort.

It is exciting in 2017 to see Berry's influence for good upon our culture--the local food movement, more sustainable agriculture, more awareness about food ethics, the various craft movements, etc.

This is one of the essay collections I had long planned to get to. It seems particularly apt in our Age of Trump, even if the essays are from the 70's and 80's. What Berry was warning us about has come to fruition.

I marked up this volume like my adolescent Bible. I will return to it often.

Life and Times of Michael K by J.M. Coetzee
My rating: 2 of 5 stars

I thought the book lost its way at the very end.

God is Good, and God is Able

The One True Thing 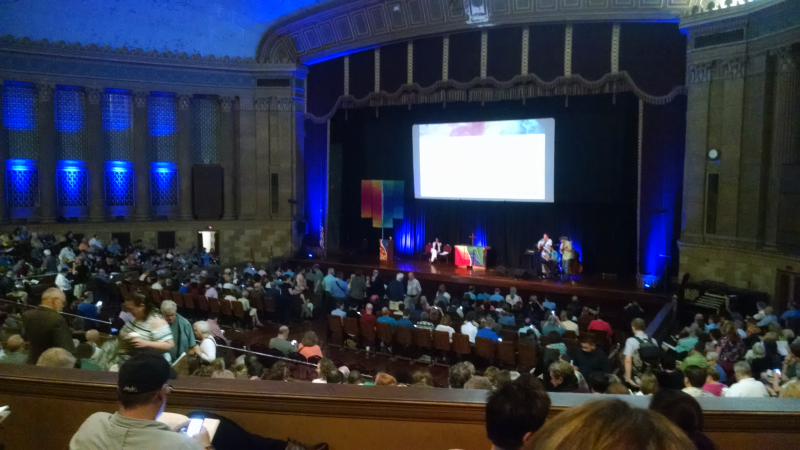 Today's worship service began with the congregation singing an enjoyable gospel-folk version of "Wade in the Water" led by the Fleshpots of Egypt.  Then we sat through a rather mundane David Lose sermon from which the main takeaway was the rule that if you are a straight white man, probably don't preach a text about a woman that a black African woman who is a marvel of a preacher already preached on this week.  Plus, I couldn't tell who the sermon was for.  It sounded like something anyone might preach on a routine Sunday; it said nothing that every preacher in the room didn't already know and hadn't probably already said themselves from a pulpit.  Not the caliber of sermon one expects at this festival and a serious disappointment from someone many of us trust and use as a resource for our preaching.

But, then, came Barbara Brown Taylor to lecture on ways she has changed her mind about preaching over her career.  She announced that this was her final appearance at the Festival, so there was a bittersweet element to being there for this recap of a distinguished career.

With her eloquence and grace she talked about how she generally makes only one point anymore, has begun to use fewer personal stories, quotes less often, and uses fewer theological words (despite having written a marvelous book defending them in the 1990's).

In her sermons she now "lavishes all my attention on the one true thing I want people to take away."

She has concluded that the preaching task is primarily about "continuing to show up."  Then she added, "It's how we learn what faith, hope, and love look like in the flesh."

This morning I began reading Wendell Berry's What Are People For? one of his classics that I have, surprisingly, never read.  In his discussion of the writer Edward Abbey I found a helpful description of the preacher in the Age of Trump:

He sees the gravity, the great danger, of the predicament we are now in, he tells it unswervingly, and he defends unflinchingly the heritage and the qualities that may preserve us.

May we be up to the task to which the Holy Spirit has called us.