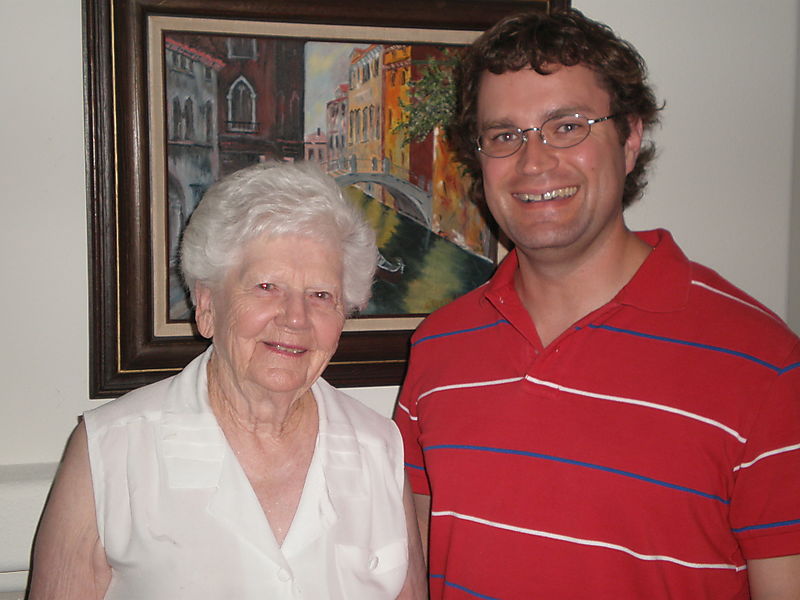 At the First Baptist Church of Shawnee, Oklahoma, which I first attended while a student at Oklahoma Baptist University, college students were paired with a member or couple in the congregation as adopted grandparents.  I think this was a random pairing, so I got lucky when at the welcome college students lunch I was introduced to Christine Reynolds.

And for the last twenty-five years Christine has been one of my favourite people in the world.  Her daughter posted on Facebook today that Christine died this morning.

Christine was the tennis coach at Shawnee High School for much of her career.  She was even once the National Coach of the Year.  She had a stellar record of tennis champions.

When I met her, she was 73 and still actively playing tennis.  She had a sports medicine doctor she went to for her knees when they acted up.  She was notoriously still beating women much younger than she.  And I don't think she stopped playing tennis until her mid-80's.  Then she took up swimming for exercise.

In retirement she had taken up painting as a hobby.

She was one of the first elderly people I met who was vitally active.  She was witty and joyful and sarcastic.

I remained in Shawnee while I was in graduate school at OU, and so my friendship with Christine deepened as we attended church and events together.  When I was elected a deacon, she was in my deacon family--the group of church members I had responsibility for.

For many years I would drop her off and pick her up at the airport in Oklahoma City whenever she traveled.  Christine was a cursed traveler.  Every time she traveled some unusual thing would happen that would delay the flights she was on.  But then she'd add it to the long list of funny travel stories to tell.

My most embarrassing memory connected with her was one night I was asleep at home and got a call, "Scott, are you picking me up at the airport or not?"  I had the day wrong, thinking she was arriving the next day.  I made it from bed in Shawnee to the pick-up at Will Rogers World Airport in forty minutes (which isn't legally doable).  It was almost 11:30 when I pulled up and she was sitting on her luggage at the curb with this put-out sarcastic look on her face.  I was so deeply embarrassed and apologetic.  But she forgave me and laughed about it.

After the big celebration for her 80th birthday, she decided to move out to California to be closer to her kids and grandkids. I moved from Shawnee shortly afterwards, but we've always remained in contact via e-mail, especially exchanging digital cards at Christmas.

In 2008 Michael and I were in California to visit his brother Robert and his girlfriend Anne and our drive took us through Fresno, so we stopped to see her.  She grilled us steaks, and we had a great time catching up.

At Christmas this last year when we exchanged cards I began to think of her 100th birthday in a couple of years and how much fun it would be to go if there was going to be a big party.  She only made it to 98, but they were 98 good years.