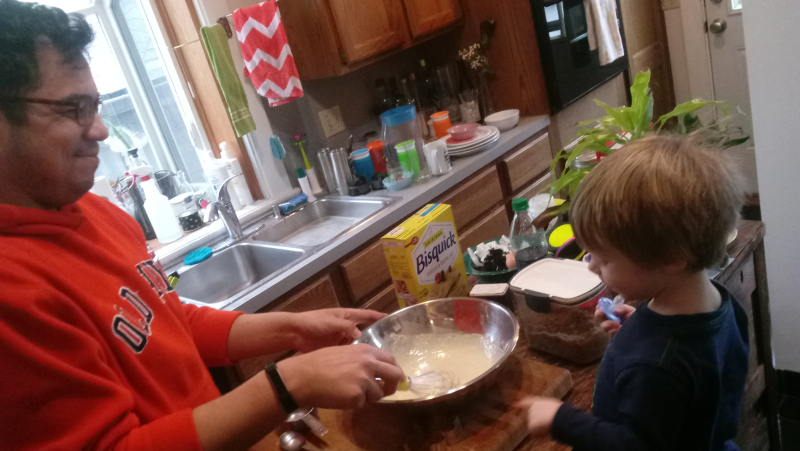 One of the great joys in our family is making breakfast together, usually on a Saturday morning.  Of course this is not unique to us.  As I continue this series on foodways, inspired by reading The Cooking Gene, this morning as Michael and Sebastian work on pancakes, I'm reflecting on the role of breakfast.  Some highlights from my past:

Mammoo, my grandma Nixon, would get up early to fix breakfast and the smell of bacon wafting up from the kitchen is what would awaken you.

My parents making pancakes in fun shapes for us to eat as kids.  Something Michael and I do now for Sebastian.

My Dad frying eggs.  He'd use the cast iron skillet and fill it with bacon grease and fry the eggs in the fat with lots of salt and pepper.

In grad school, fixing breakfast with friends who had stayed over after a late night of partying.

What about any rich cultural influences on breakfast?  Let's talk about grits.

I grew up in an area where we enjoyed grits both as a breakfast food and as a side at suppertime.  Generally they were served with a little butter, salt, and pepper, though occasionally someone would make cheese grits.

Michael Twitty, in The Cooking Gene, writes about the role of grits in Southern cooking.  This reminds me of the best grits I ever had.  I was in Helena, Arkansas, a town in the Mississippi Delta that Mark Twain said was the loveliest spot on the river.  I was there scouting for our church's mission trip and I arrived about an hour before my meeting, so I stopped in at Bunny's Cafe where I had grits and coffee prepared by Bunny, who was African-American.  They were the best grits and the best coffee I'd ever had.

While eating alone, I was joined at my table by a man who worked for a local youth services organization.  When he found out who I was and why I was there, he shared with me about the racial history of the city and the impact upon it of integration.  He spoke of how integration, a good thing, had the unintended consequence of devastating the black commercial district, as African-Americans began shopping in the white stores but no whites began shopping in the black stores.  The area had also experienced two drains--white people fled to the suburbs of nearby cities like Memphis and Little Rock and middle class African-Americans went off to college and didn't return.

This conversation was one episode in a day full of revelations about poverty and racial inequality.  Though I had intellectually understood them before that day, this was the day my eyes were open and I gained insight.  That day was an epiphany which led to social justice action becoming central to my ministry.

Another word on grits.  In 2014 when Michael and I visited friends in Denver over Labor Day weekend, we were surprised to discover shrimp and grits being served almost everywhere we went to eat.  Somehow this food of the coastal southeast was prominent at the gateway to the mountain west.  Now whenever we fix shrimp and grits, we joke that we are going to have Colorado food.

I think the next post will be about rice, which in my childhood was also a breakfast staple, but rice deserves its own post.

The previous post in this series was about Texas Caviar.