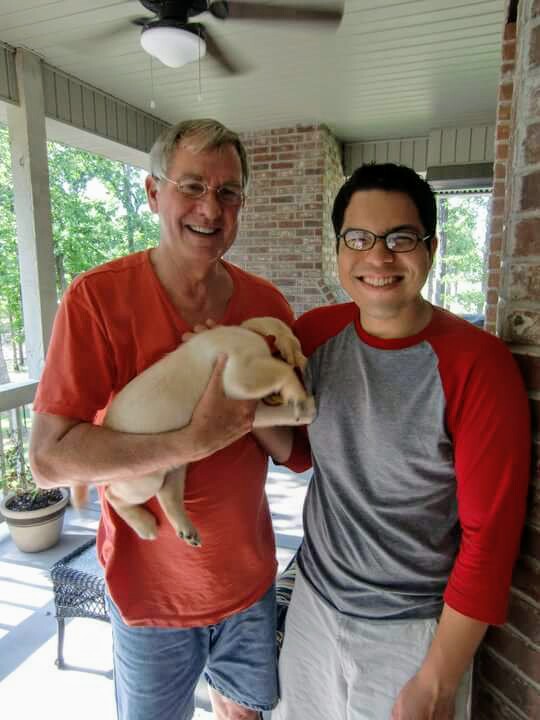 In all the long years my mother was a widow, I wondered what sort of man she might meet and marry.  I wanted someone who would make her happy, but worried about some man I might not get along with.

So, when my mother began seriously dating in 2001, I was nervous to meet Revis Stanford.

My nerves were quickly eased.  Revis was very kind and gentle and funny, even if his humor was corny.  It's then I learned what my mother most liked in men--those who made her laugh, as that is the trait Dad and Revis shared.

And I would soon learn many other things about Revis--he was generous, caring, athletic, smart, religious, and he liked his routines.

In 2004 he and Mom married, in a lovely little ceremony in her backyard with forty family and friends gathered for the occasion.

In those years when I lived in Dallas, he and Mom would come to visit and bring their bicycles, and we would all bike along the trails from near my house at Royal and Greenville down to White Rock Lake and back.  We still talk with dreamy nostalgia of those days.

Mom was soon in the best shape of her adult life as she and Revis biked, fished, traveled, and had fun together.

In the summer of 2004, not long after their wedding, I came out to Mom and Revis.  I didn't know how the moment would go, and it is recounted in detail in my forthcoming memoir.  I especially didn't know what my new step-dad might say, but he reached out and held my hand and said, “Scott, why should that matter? I love you like my own son. This doesn’t change anything.” And so Revis Stanford became a hero in my story.

But he was a hero already.  Revis spent ten months in Vietnam from 1967-68 with the U. S. Marines 2nd Battalion.  He fought in seventeen battles, including Khe Sanh, the longest of the war.  He received four Bronze Stars and a Purple Heart.  But in Vietnam he was also exposed to Agent Orange and experienced trauma, receiving a PTSD diagnosis forty years later.

Revis grew up in California surfing and listening to the local band, the Beach Boys, before they made it big.  He raised two children with his first wife.  He went into accounting and auditing and worked for the Phillips Petroleum company and later the U. S. Government as a Certified Fraud Examiner.  He worked for Housing and Urban Development when he and Mom met.

In 2005, when I accepted the call to serve as Pastor of the Cathedral of Hope in Oklahoma City, I put my Dallas house on the market and Mom offered me their guest bedroom in Oklahoma City until it sold.  Little did we know that it would be eight months, so at 32 I lived with my Mom and her new husband.  It was not ideal for any of us, but we survived.  It did give me and Revis a chance to grow closer together, while also learning each others strengths and weaknesses.

He and Mom retired in 2010 because his PTSD was worsening.  They built a big beautiful home looking out on a cove of Grand Lake O' the Cherokees with the intention of spending their retirement years peacefully enjoying the water, fishing, entertaining family, and traveling.

They were able to do some of that, but less than a year into retirement, Revis was diagnosed with Alzheimer's Disease.  Since 2011 the health episodes and diagnoses have come quickly--he had a brain aneurysm and struggled to recover from the brain damage, Parkinsons, a stroke, and finally he went blind this year.  By 2015 the Veterans Administration declared him 100% disabled, and he entered a nursing home only a few weeks after Sebastian was born.

Two weeks ago I drove to Oklahoma to spend my final days with my step-father.  His corny humor was still present.  We Facetimed with Sebastian, who sang him a song, and Revis, who delighted in grandkids, was so happy in that moment.  But his horrible diseases robbed his dignity.

A beautiful memoir, Scott. What a legacy. I’m sorry there couldn’t be more time with him.

Oh Scott, my deepest condolences to you, your mother, and all who loved Revis. I know the effects of Alzheimer’s and the pain it can cause. This is a lovely tribute to what sounds like a special human being. Sending much healing energy your way!

Your remembrances honor him. Prayers to you and your mom, Scott.

What a detailed description of your appreciation of your step-father. My sympathy to your mother and the rest of your family.

Scott, deep sympathy with you and your mother and family.

Scott, such a beautiful tribute. You have such a way with words. Prayers for you and your family as you remember and honor a wonderful man.