Where I Currently Stand in the Democratic Primary 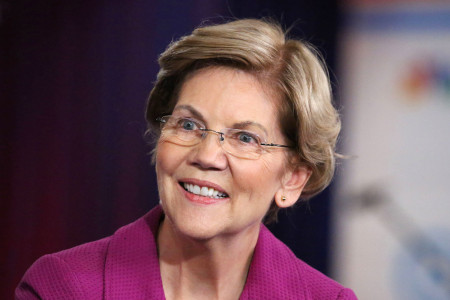 It's Super Tuesday.  We in Nebraska don't vote till May 12 and one wonders what our choices will be by then.  Unlike previous election cycles I have not been blogging or social media posting my thoughts in the primary the last year, though I have been following it and reading other people's posts, open to persuasion.

There have been five candidates in the primary that I donated money to.  A large number.  There were a handful of others I could have been interested in had they performed well.  At various times I've favored different candidates, but I've largely left myself open, knowing that my vote would come very late in the process.

After all the developments of the last 48 hours, I now feel confident to publicly state my choice.  The only remaining candidate I support in the primary is Senator Elizabeth Warren.

I don't care for any of the old white guys running and wish none of them had.  We have so many strong and excellent candidates to offer that we could have had a good primary determining the future of the party without the old Baby Boomers trying to hold onto power.

Michael Bloomberg frightens me.  He seems like a classier, more centrist version of Donald Trump--a rich guy who would try to force or buy his own way.  I'm not sure I thought this about him a decade ago, but post-Trump various things become clearer and more important.  Here in Nebraska we've endured a billionaire governor, and I don't recommend it.  Our governor uses his money like an extra veto if he doesn't get his way by funding ballot initiatives and primary challengers to legislators who oppose him.  I don't want something similar at the federal level, even from someone like Bloomberg who agrees with me on some issues.  I feel like it is most important to defend and strengthen our democratic institutions, and Bloomberg's sense of entitlement that he can buy his way into the top tier threatens that.

Bernie Sanders I mostly just disagree with as a matter of policy.  His most rabid supporters also annoy me.  I feel like he ran an insurgency in 2016 that damaged our party.  But I'm not as afraid of him as some pundits and establishment figures seem to be.

I'm supposed to be in Joe Biden's demographic--a white, middle-aged, heartland moderate.  But Biden holds no appeal for me.

Joe Biden shouldn't have run.  He had achieved a career capstone with a well-regarded turn as Vice President.  For more than thirty years, since he ran disastrously the first time, I've never cared much for him.  I find him more than a little creepy.  Back in the Aughts Dick Cheney once said on a Sunday morning show, "In the last thirty years no one has been more wrong about more things than Joe Biden."  Cheney was right.  Biden has a long career, but little of it is inspiring.  He does seem to be motivated by compassion, which is lacking these days.  I've never understood the thought that he would have performed better in 2016, because all evidence was to the contrary based on his two previous runs for the presidency.  And even in this cycle he was fifth in New Hampshire, which would normally eliminate someone.  I still don't get how his first primary win in thirty years of trying so dramatically changed the race.  Particularly with the clear evidence of his decreased function with age, his inability to run a well-organized campaign to date, and the whole Ukraine mess which really should have eliminated him if for no other reason to spare us even the appearance of anything untoward.

But my biggest critique of Biden at this moment is that he is a nostalgia candidate, and I don't think looking backward will win us the election.  I think the Democrats need to put forward a new vision for the country and not just run in reaction to Donald Trump.   I honestly don't see Joe Biden inspiring people, and I have no confidence that he defeats Trump.  Truth is, if it comes down to Bernie and Biden on May 12, I may vote Bernie simply because he has a forward-looking vision (even if one I don't agree with) that inspires a lot of people as opposed to Biden's nostalgia tour.

One more thing about Biden.  If he should win the nomination and the general election (which I have zero confidence in), I believe we'll have four more years of stagnant government and likely a GOP victory in 2024.  I don't see that Biden creates us any lasting movement for the future.

Elizabeth Warren I do like.  She is competent, passionate, energetic, and strong.  I was shocked when she fell so quickly last fall from her short time as a front runner.  She has seemed for some time now to clearly be the candidate who appeals to enough people in the center and the left.  Most people who I know who were backing another candidate had her as a second or third choice.  I'm a little angry that she's been left out in the rapid changes of the last few days.

So, I'm no longer undecided.  The winnowing of the race has left one candidate standing that I can support in the primary.

I agree with you about Warren. She has been my first choice from the beginning. The others I really liked were out pretty early. I disagree with you about the others in one respect: they AREN'T Boomers. They are too old to be Boomers. Elizabeth is the only Boomer left on the left. Now the question: why are my Facebook Friends so overwhelmingly for Warren and yet she isn't doing great in the polls? Is it that I have so many well informed, intelligent friends, in a nation filled more with anxiety and emotion than discernment?

My God, you are correct. Biden's born in 1942 which makes him a member of the Silent Generation. The only generation in American history that never provided a president (in 1993 we skipped from the WWII generation to Boomers). How weird if they, this late in life, eke one out.

Also, on the final point, there's this: https://www.vox.com/2020/3/3/21162527/what-happened-to-elizabeth-warren?fbclid=IwAR2vfIDEGQZRuAI7SGuQkDvv60CdBimXjY31x3eJjEr07TveJu79QUFp7h4

Biden was not my first choice, and like Sanders but disagree with his uncomproming orientation, and I also liked Warren, who more wiiling to compromise when she examined the figures, but she wasn’t able to get the votes. I believe that Biden CAN and WILL win both the nomination & the election! I hope will all join hands and votes to assure that victory. I also think he will select a creative v-p, hopefully Warren, and other creative folk who will help him win and support the progressive wing of the party, John