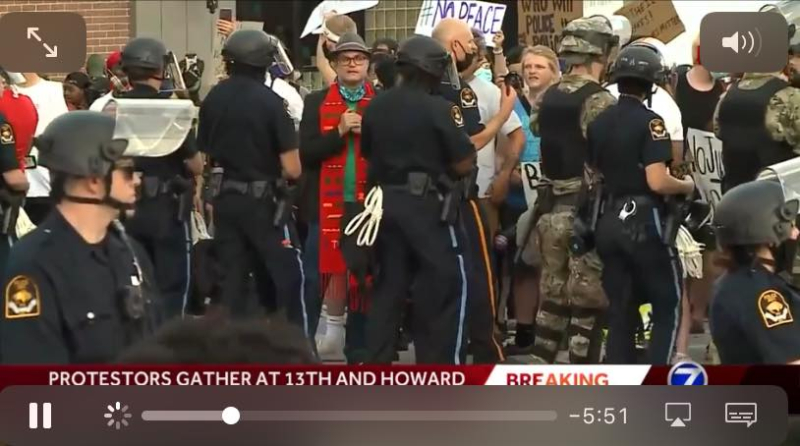 My colleague the Rev. Darrell Goodwin, Associate Conference Minister for the Nebraska, Iowa, and South Dakota Conferences of the United Church of Christ, picked me up around 5:30 in the evening so we could head downtown to work as clergy providing pastoral care and de-escalation in an effort to avoid more violence, particularly loss of life while also bearing witness to those who were angry about yesterday's decision not to charge the killer of James Scurlock.

We parked on the outskirts of downtown, donned our clergy stoles, and began walking.  As we came up to the first of five police cordons we went through, I lowered my mask and introduced myself and explained why were were there, intentionally speaking first as the white man in the duo.  The first two cordons of officers sent us ahead.  At the close of each exchange, I wished those officers well and said I was praying for them.  In all the officers you could sense their worry and the tension of the day.

At the third cordon, we encountered a commander in military style fatigues who then walked us the remaining few blocks and through other cordons to where the protestors were gathered.  We walked up to the first officer there, who just happened to be Deputy Chief Kanger.  We again introduced ourselves, and he gave us elbow bumps.  We said what we were there to do and asked if we could be of help. He seemed very pleased and thanked us.  He asked us to talk to people who seemed particularly emotional, which is what we spent a lot of the evening doing.  This was the first of many conversations over the next few hours with the Deputy Chief.

Darrell and I headed to the front of the line.  We walked along between police and protestors introducing ourselves to both.  I generally led next with, "How are you feeling this evening?"  Which often elicited a long response.  In each exchange I'd close with offering to be of help in any way I could and told them I was praying for them.  One young man asked specifically for me to pray over him.  Many thanked us for being there.  A few talked about how churches needed to talk about these issues.

The protestors were almost all so young.  They were upset and afraid.  They didn't understand this injustice, why people keep getting killed, why nothing ever seems to improve or does so so very, very slowly.  A number of the protestors at front were engaging the police in conversations.  Occasionally they took pictures together.

A few, and it was only a few, were more aggressive, yelling at the police.  Often other protestors gathered around those folk to try to de-escalate them, and the few clergy there (I think I counted six total over the course of the evening--fifty clergy would have radically altered the event for the good) also tried to engage those folk in conversation.  My experience was that most people just wanted their pain and anger heard and after someone listened to them, they appeared not as agitated.  Darrell did amazing work on more than one occasion talking someone down, including one person who early in the evening wanted to rush the cops.

Occasionally I had to explain to some protestor why what they were demanding some cop to do was something that couldn't be done last night, trying to help them see how unreasonable demands didn't work, but that those demands could be channeled, were legitimate, and could be pursued.

I talked for a while with one of James Scurlock's brothers, who was so heartbroken and was there to thank people for peacefully representing the family as they had asked.

Shortly after we arrived one very young woman was asking the front line of police if everyone could march together.  A pastor from Zion Baptist heard her and brought her to the Deputy Chief to talk and eventually the Deputy Chief okayed that, so the crowd, with some police included, marched around the Old Market.  For a good part of this march I walked alongside the Deputy Chief and we discussed how to help the situation when the 8 o'clock curfew rolled around.  During the march around I also ran into a church member there protesting. 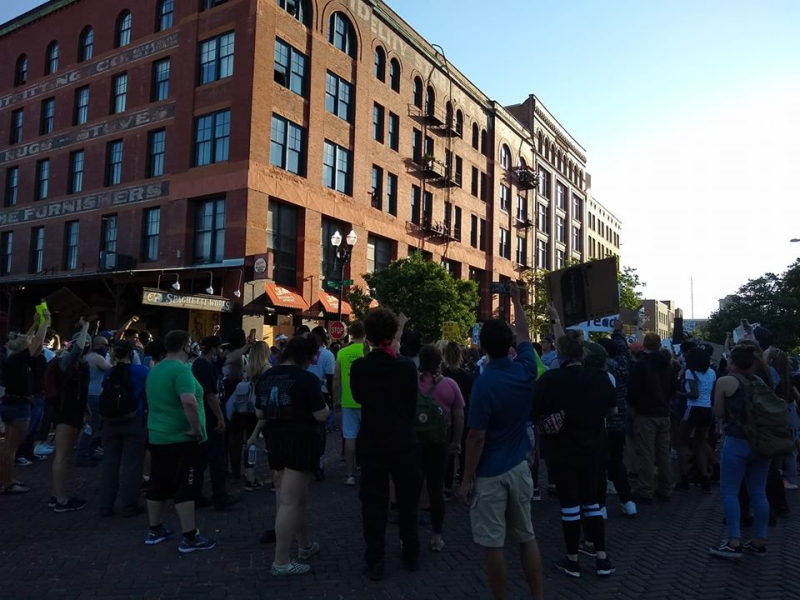 I was most troubled by one very angry woman who had a toddler with her who walked along the line screaming at all the cops.  I tried talking to her child, and she snatched him away and then wouldn't talk with me.  Darrell tried, and she wouldn't talk with him.  But eventually she did, and Darrell kept trying to talk her into taking care of her baby.  She did eventually seem to disappear.

Some of the young people were wonderful positive influences on the crowd.  One young man, crying, got everyone to kneel and asked all the cops to, and when they did, the crowd erupted in positive cheers, suddenly the cops were swarmed with hugs, hand shakes, and selfies.  This occurred shortly before the curfew, and I believe is one reason that many of the young people left before the curfew.  They had been heard and their pain acknowledged. 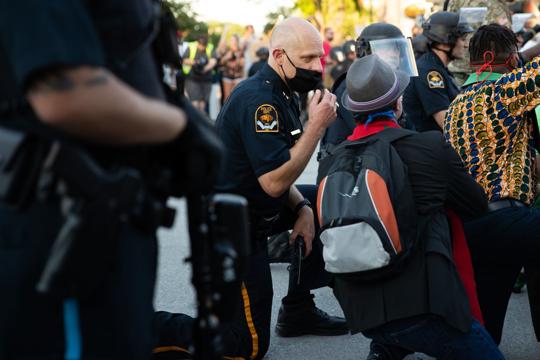 Suddenly as the curfew fell, the crowd was very different.  Many of the folk who had been there on the front lines for hours had left and there were new people.  It was also a much whiter crowd than earlier.  At that point Darrell and I began trying to talk them into leaving peacefully.  One couple asked, if we do leave, which way do we go, we look boxed in.  So, I asked the Deputy Chief, who told me to the North, so we began passing out that information.  It was clear that some did not trust us or the information.  It was during this time that I had protestors asking if I was really a cop.  Or I overheard them say to others after I had talked to them, "You know he's a cop, right?"

I saw two young women, the eyes above their masks revealed their fear.  I stepped up to talk to them.  "What happens now?" one of them asked.  I told her that those who remained would be arrested.  "I can't be arrested.  Where do I go?"  I told her she was to walk north.  I took the two of them to the Deputy Chief and had him confirm that for them.  So those two young women started out the exit route.  A trickle of others began to follow.

And suddenly, some idiot in the departing crowd through a water bottle, and some police began shooting pellets at the people leaving.  I was horrified, as I had sent them that way.  I ran into the street screaming at the cop who was firing to stop as the Deputy Chief had sent them that way.  The look he gave me, I thought he was going to turn his weapon on me, but he did not.  He did quit firing.  A media person nearby said, "Yeah, they fucked that up."

We kept encouraging people to leave peacefully, even after that happened.  There was a moment when the protestors were completely closed off from the exit route.  Darrell and I were standing together with the media across the street and began yelling for the police to make an exit route.  Which they listened and did.  Suddenly, some shots and tear gas were released not far from there and so many took the opportunity to run for the exit.  Darrell and I were walking along and got a little separated.  A couple of cops began insisting I move along.  I told them I'd been working with the Deputy Chief in getting people out and was waiting for my clergy colleague right behind him, he told us snidely, "You should have left already, it's after curfew."  He didn't listen to our explanations, but we moved along, encouraging those leaving to keep going and not turn around and yell or anything as doing so risked everyone going that way.

The gas now came our direction and I was coughing and struggling momentarily to breathe.  A woman came up and squirted water on my face and in my mouth.  Moments after that, as I was walking along behind the protestors with my arms raised and yelling, "Leave peacefully" I was knocked to the ground by an impact on the back of my neck.  I yelled "What hit me?" as the realization and fear began to dawn on me.  A young man ran up to me, "Padre, you've been shot." Darrell grabbed me and pulled me against the wall of the building to make sure I wasn't bleeding.

At that point we rushed along behind the exiting protestors continuing to encourage them forward.  We finally turned a corner and found four police to whom we explained what had just happened, who we were, that we had been told by the Deputy Chief to go that way but had been shot and gassed.  We asked what was the safe way back to our car and they directed us.  We had to repeat this conversation a number of times.

We finally made it back to our cars and had to drive a circuitous route back to my house where Darrell dropped me off and then drove himself home.

I've never seen so many cops. So many of them in full military gear.  There were military-style vehicles in the streets.  It was horrifying.  There are so many different and better ways to let people express their justified anger without creating a war zone.

Today my entire body hurts, but my soul hurts even more.

Thank you for serving and being a presence in this. I can't imagine being in this, my heart goes out to you and Darrell.

Thank you to you and Darrell for being a presence in the midst of chaos. My heart aches for both of you all those who peacefully assemble.

Thank you for being there to help diffuse, deescalate, and help. Bless you and Darrell.

Thanks be to God you and Darrell are safe. Thank you both for being there as voices of calm and reason.

Thank you for all you have done. I thought I saw you in a live feed and prayed for you last night.

Thank you Scott and thank Darrell too!

Thank you both for being a presence amidst the chaos - for witnessing to your faith.

Thank you, Scott and Darrell. You are the hands and feet and voices of the great Love.

Scott (and Darrell) today you are my Superheroes. Thank you for your witness, your service, your courage, and your example. This is what the Love of God looks like.

Today I am even more proud of you than usual.

Thank you for being a Blessing and a Calming force in this storm of negativity. As a former police officer and a children's minister, I can see both sides. There is never reason to use force on people who are not threatening you and are retreating to safety. Nobody should have to live in fear of the government agencies that are there to protect them. The people deserve better. The people demand better. The people should be given better.

I can’t even express my gratitude for what you and Darrell held witness to.
Please- everyone go to 8cantwait.org and look up your city. Then call your mayor to demand the needed policy changes listed on the website.

Weary. Been doing this since Carl Stokes ran for Mayor of Cleveland, Ohio in the late 60's. Ahmed Evens and the Black Panthers ended that. A whiff of CS (tear gas) wafting through my Dundee neighborhood was actually nostalgic. Damn. So glad you were out there. David

Scott thank you for your ministry a Monday evening. Doug and Marlene Roberts