In today's excellent devotional from the UCC, Quinn Caldwell writes "Gardening, it turns out, is the first task given to humans, arguably our defining characteristic."

This morning I finally made it into the garden.  I turned the hose on and by the time I'd walked over to the garden, there was a muddy mess beside my plot, where the hose was lying, because the hose was busted.  I went and turned it back off, but ended up with muddy shoes, muddy hands, muddy tote bag, and some mud on my butt by the time I was done and entered the office.

Today was bountiful.  The red cabbage, as I was informed, had a handful of smaller heads developing nicely.  I picked two that were larger and firmer.

The jalapeno is doing well.  Two were bright red, so I picked those.

The bell pepper had three, one large enough to pick.  I've always struggled growing bell pepper, so am pleased with these.

I picked handfuls of Brussels sprouts and a pile of Roma tomatoes.

And the eggplant was ready to pick.

Lots of veggies at our house the rest of the week and this weekend.

No more cucumbers, though I still saw a few buds.  And no more squash.  Though the plant had some fresh growth and blossoms, it is dying, so I'll remove it over the weekend when I can come dressed for garden work.

Of the various seeds planted two Saturdays ago, the lettuce is up.

Last week I only made it to the garden a couple of times.  I did a little watering and weed pulling, but not much else.

Saturday morning was a lovely day, and I spent much time in the garden.  We've had unseasonably cool weather, with highs in the 70's and lows in the 50's.  It must be what July is like in Duluth.  So, I spent more than an hour enjoying the garden on Saturday morning, but realized after I got down there, that I had not brought my phone or camera to take pictures.

I did a lot of weeding.

I also removed the unproductive zucchini plant.  I had decided to anyway, but when I looked at it, I noticed that the first four inches at the base of the stem were gray colored and rotting.  A biologist friend earlier in the week confirmed that the other squash plant is a hybrid yellow squash/zucchini, but that the original seed would have been that, not some merger of the two side-by-side plants.  This hybrid continues to produce large, tasty fruit.  We've had it a few times as side dishes and in pasta.  It sautees nicely in olive oil with a little red onion, salt, and pepper.

The tomatoes are having problems this year.  The inconsistent temps and moisture, much like two years ago, are creating bottom rot and those annoying little black spots.  Last year, during the drought, we did not have this problem, and had a magnificent tomato harvest.  All the heirloom yellow tomatoes that were ripe had the bottom rot.  The beefsteak is not quite ready, though I picked a few for fried green tomatoes.  The other yellow one, can't think of the variety right now, has one big one close to harvest.  The Roma is producing mightily, though with the black spots.  I've used a few in pasta and shared some with our friend PJ.

We also, finally, had a handful of cucumbers to pick, instead of just one a week or two like it has been.

I also harvested some jalapeno peppers, the rest of the chives (as they were getting droopy), about half a dozen Brussels sprouts, and PJ let me take some of her green beans.

I took a bag full of squash, cukes, chives, and peppers to the church today for our weekly produce sale.  The profits of which go to fun our hunger ministries.

After weeding and harvesting, I planted seeds, looking forward to those things which can be harvested late summer/early autumn.  I planted beets, spinach (remember the great spinach earlier in the year), carrots, lettuce, and scallions.  I did take a picture of the packets when I got home. 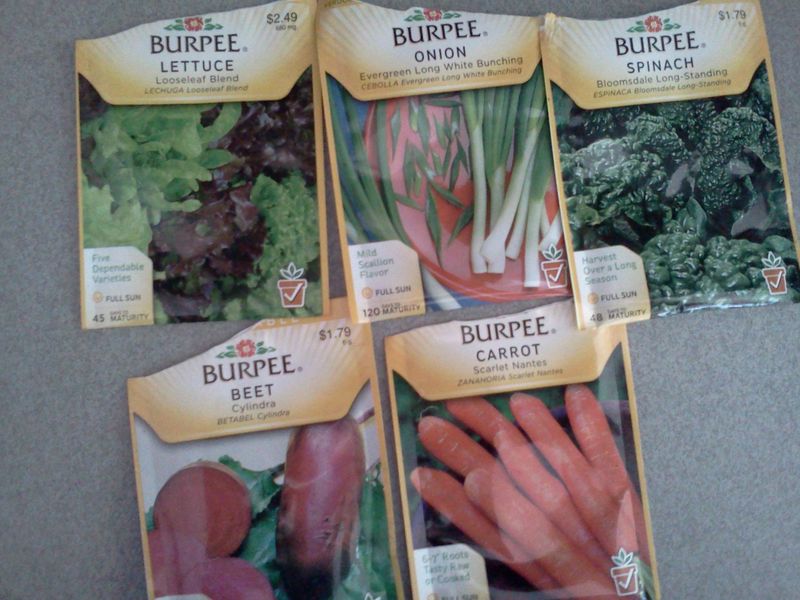 This afternoon we stopped by the garden to see what we could harvest for this weekend's meals.  The yellow squash has exploded.  One, which was still small just a few days ago, was the size of an arm.  The zucchini are just not producing.  The yellow squash, though, look more like a zucchini.  I wonder if somehow the two plants have merged with each other? The red cabbage is sprouting small cabbage heads and there were three ripe Roma tomatoes.  Also, the okra seedlings are growing nicely.  And there is a baby eggplant! For dinner tonight I fixed the red cabbage.  I used this recipe, though I added my own touch to it, sweetening it a bit more with some honey and more sugar.  My favourite German red cabbage is made at the Bavarian Grill in Plano, Texas and it basically is a dessert (BG is my favourite German restaurant).  Mine wasn't as sweet as that, and Michael was glad because he doesn't like it sweet.  I was very satisfied with the results. 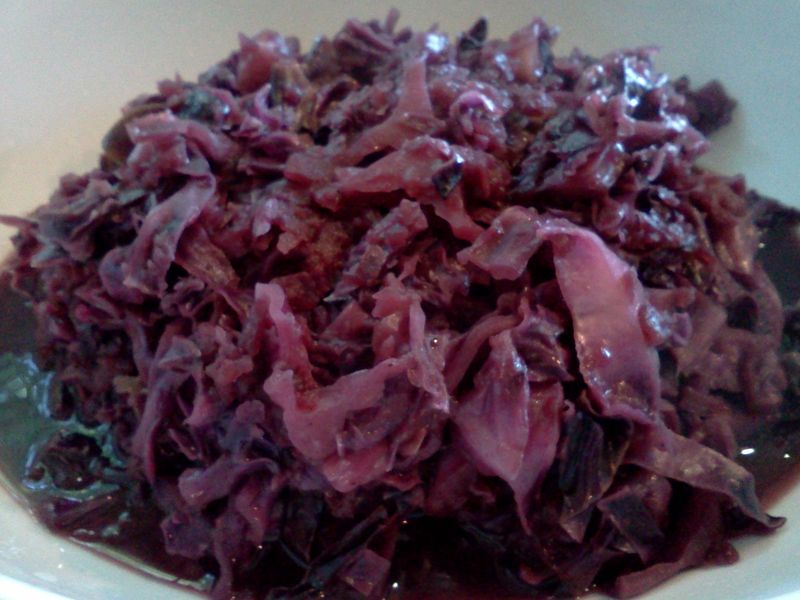 I decided I was going to make a German themed dinner, so I harvested the red cabbage with the intention of cooking it.  But, after I had prepared other parts of the meal, I realized that the recipe for German red cabbage would take more than an hour, and the roast chicken was actually almost done.  Oh well, I'll make the cabbage later.  When Michael saw it sitting on the counter he got really excited, "It looks like a real cabbage."  "Well, it is a real cabbage."

I did prepare a cucumber salad from the first cucumber of the season.  And also used some of our fresh dill to make dilled potatos that were yummy, probably the best I've ever made, and I've made damn good dilled potatos in the past. 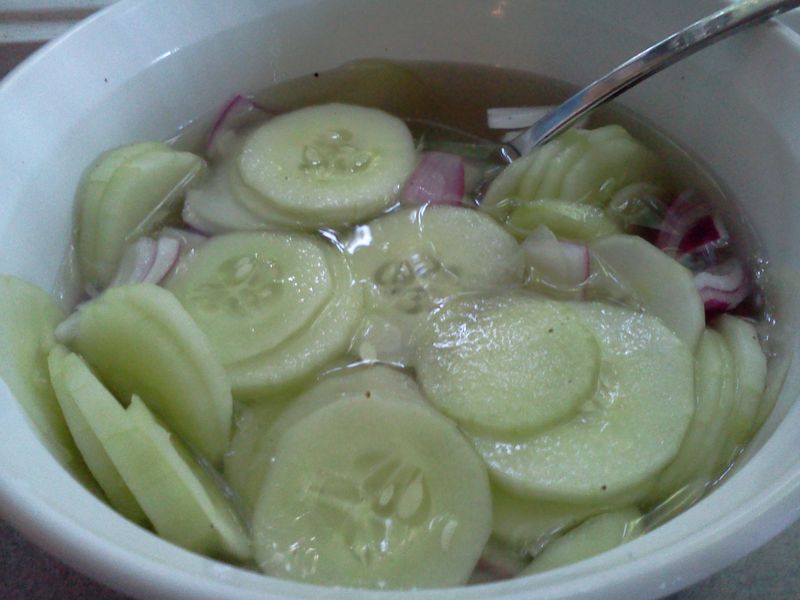 This afternoon I also removed the broccoli plant.  I'll put something else in its place.  I left the base of the cabbage plant, as the website I read said that small cabbages could sprout from the remainder of the plant.  We'll see.  If not, I'll remove it soon and plant something new.  The entire south end of the bed is opening up, which was my plan.  The okra I seeded after I removed the kale is coming up nicely.

It looks like we'll have Brussels sprouts and yellow squash before the week is out.

Yesterday evening I stopped by the garden to harvest and water.  We had had a brief cloudburst, so I wasn't sure if it would need water or not, but it did not.

The red cabbage was looking magnificent. 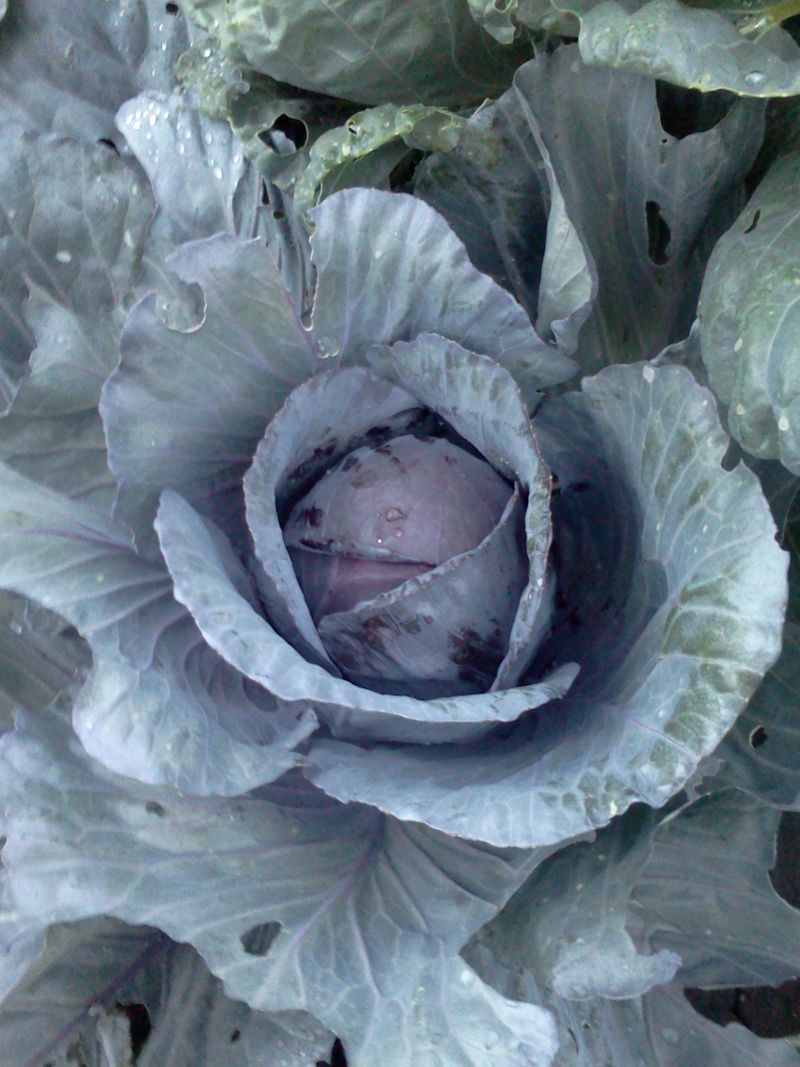 And the Brussels sprouts were really developing. 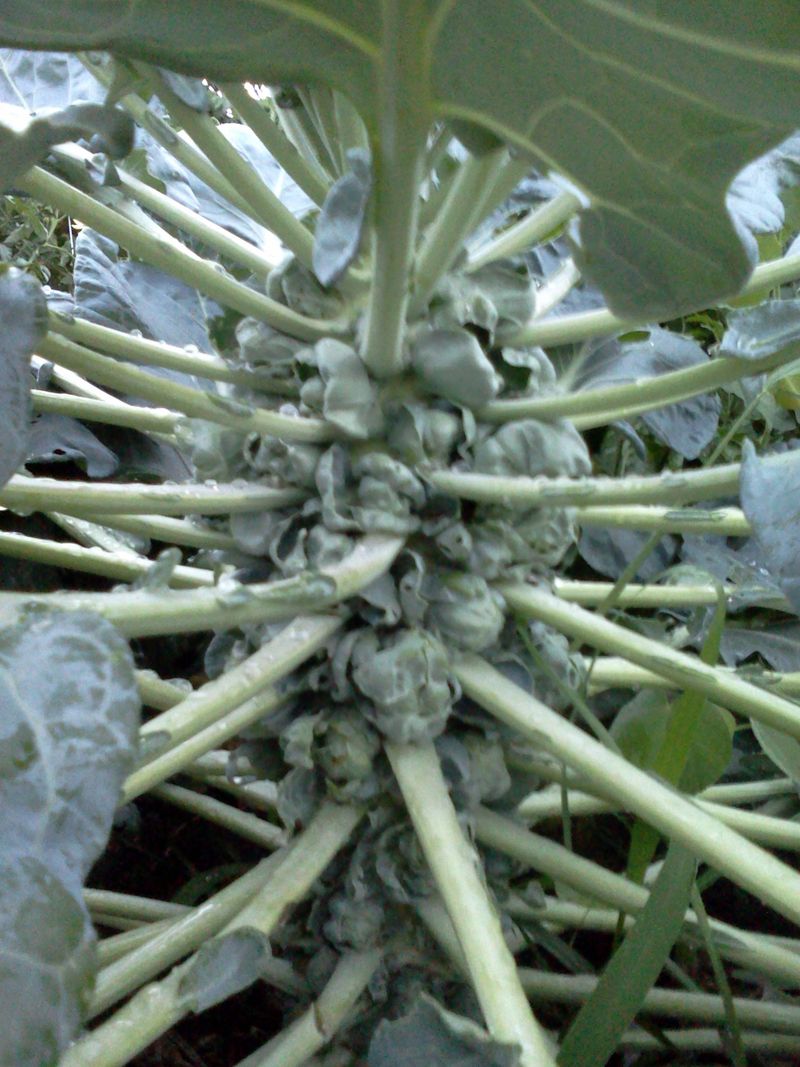 Otherwise, I harvested the first cucumber of the season, a few more little broccolis, and a small yellow squash. 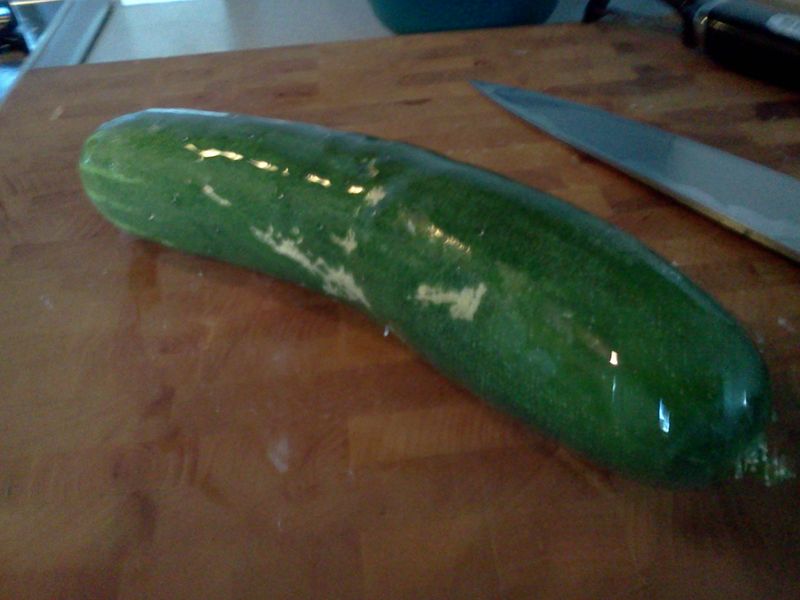 I'm not a fan of this year's zucchini plant.  It is a different variety than last years, which was amazing.  This year's zucchini just doesn't seem to be growing.  I keep thinking when I return to it I'm going to have something to harvest, but that isn't the case.  The yellow squash is also not developing anything of much size, though it is flourshing more than the zucchini.  I wish I knew the variety we planted last year, but it also seems to be the case that what you plant one year doesn't do as well the next.

I thought we'd have a lot of zucchini by now, and some of our neighbor plots do, so not sure why ours aren't producing.

Back to the Garden 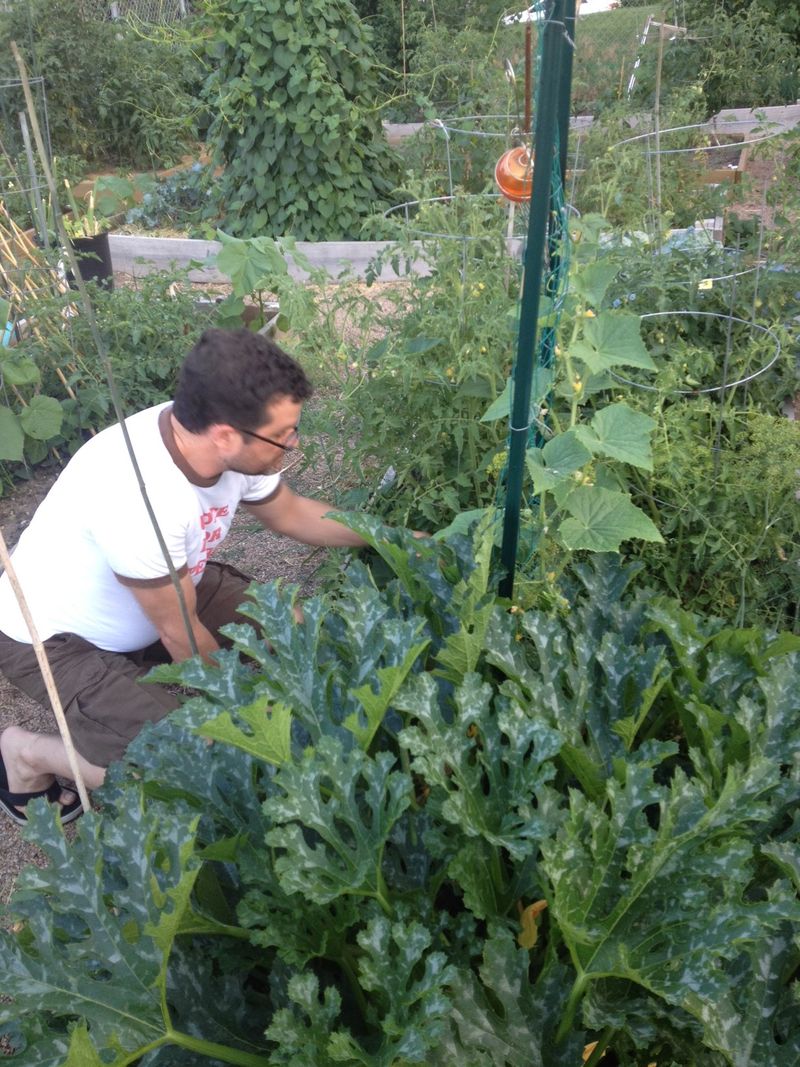 After almost two weeks, I made it back to our garden plot.  Everyone's gardens have grown so much while we were away.  The tomato plants in particular have exploded.

There was some more broccoli to harvest, which I gave to my friend Niki who came with me.  The red cabbage is looking quite nice, so I need to do some research to see if it is time to harvest it or not.  No Brussels sprouts yet, though something is enjoying make wholes in the leaves.

I took a few more chives and scallions and some more fresh dill.

The tomato plants have grown mightily, especially the roma plant, which is laden with green tomatos at the moment.

The cucumbers had not grown as I expected, and they've also sent shoots all over the garden, rather than climbing the trellis they are planted next to.  I only saw two baby cukes.

The eggplant was flowering.

The squash and zucchini plants are huge and there are many baby veggies growing.  I had thought I'd get to harvest some yesterday, as there were babies growing when we left.  I'm wondering if one of our garden mates harvested any, which is fine, since we were gone (it's what I wanted them to do).  But in a few more days or a week or two we'll be bursting with zucchini and squash.

After reading up on radicchio I did some reading on broccoli in order to discover when I should harvest, this being my first time to grow it.  This site was the most helpful.  It said:

When you see a flower head beginning to form in the center of the plant, check its growth every day. Ideally, you harvest broccoli while the tiny buds are tightly closed. If the buds begin to swell or show yellow (the flower petals), cut the head from the stem right away, no matter how small it is, because the opening buds have a mealy texture. After cutting the main head, leave the plant to grow bite-sized side shoots in the axils of the leaves.

Well, I hadn't checked it yet today, and yesterday it looked great, so I thought I'd go check, and sure enough, it had little yellow flowers forming!  So I cut it.  Yesterday might have been the prime time to harvest it, and I'll know that for the future.  Already one little side shoot is growing. 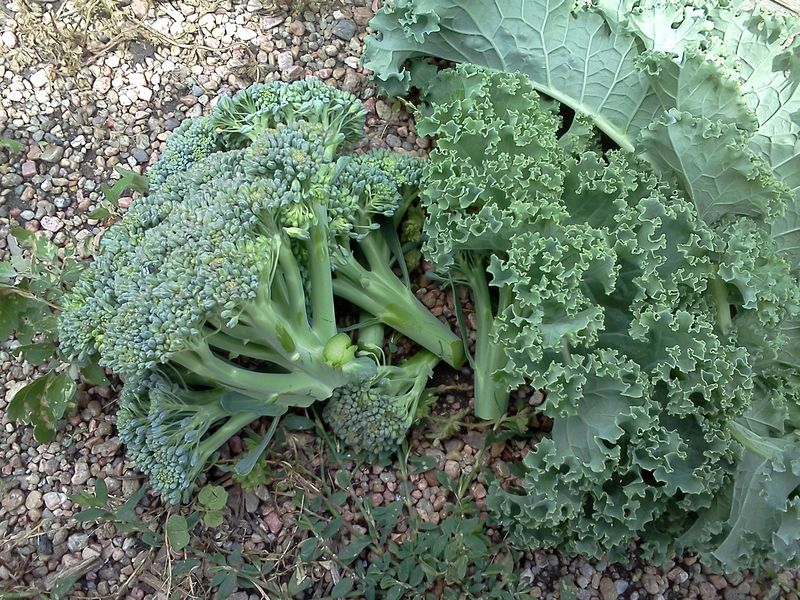 I also remembered to take pictures of the little yellow squashes and first tomatoes that have already begun growing. 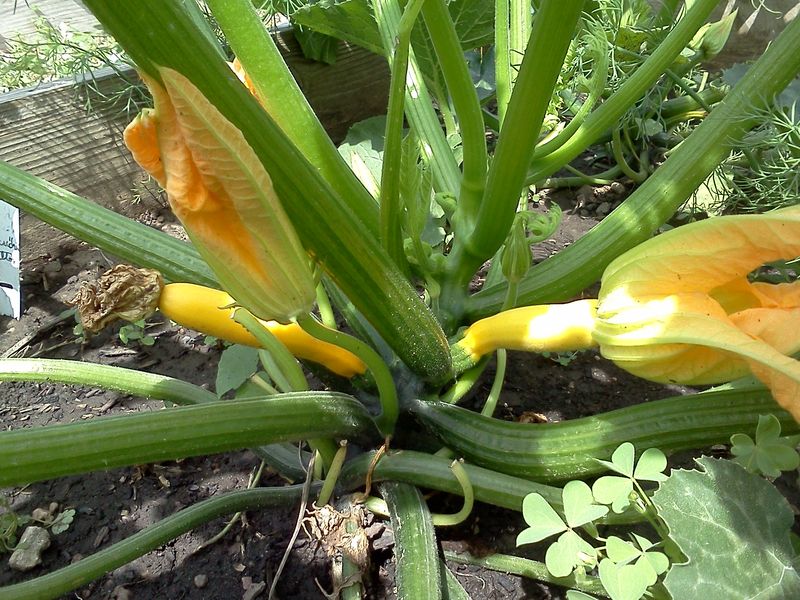 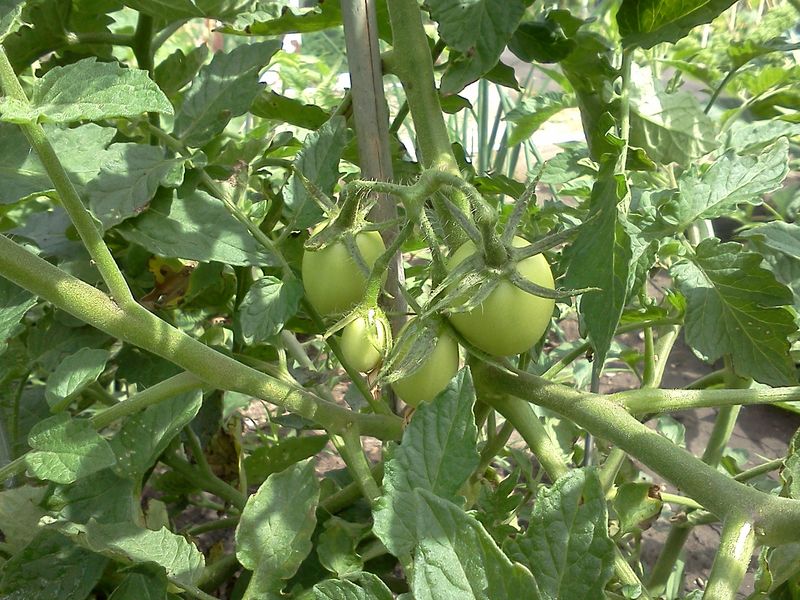 I also harvested some more kale, but didn't cut the plant off yet.  And I picked three scallions which were good sized.

This afternoon I've done a little research into radicchio to see when I should harvest.  One site informed me I could start harvesting leaves anytime.  The head can be harvest once it starts firming up; you don't have to wait until it gets to a certain size.  Heat could spur the head to begin bolting.  We've been getting hot weather this week, so I should watch for that.

I didn't realize it was a perennial, so hopefully it will come back next year!

Here are the links I thought most helpful:

Watered the garden this morning.  First time in weeks, because we've been having so much rain.  I forgot to take my phone along to get pictures.

There are two little yellow squash growing and one zucchini.

The broccoli is huge; I'll be able to harvest it this week.

My guess is I'll complete the kale (it doesn't like warm weather, and this week we are finally getting sustained 80's and 90's) and harvest the broccoli and radicchio.  This will free some space for other things.  P. J. (our neighbor) was going to put some okra seeds in the corner where I've removed the spinach plant.  I've got a few other seeds to sow as well.