Curious thoughts on the connection between empathy and time

In this week's Brainpickings email, curious thoughts on the connection between empathy and time.

I started this blog in 2004, and every few years I take the time to redesign the look.  Now Typepad has far better and more options for making it look good.  I think this is the best design yet.  What about you?

On April 4, 2004 I began this blog (that tenth anniversary is rolling around soon) with a post entitled "Getting Started."  It reads:

Matt Maddox first told me that I should blog after the last Christmas letter. At the time I felt I didn't have time to devote to on-line journalling. But the idea sure was tempting (I am one for sharing my thoughts with others). Over the last few months, more and more people had suggested that I blog. So, I've finally decided to do it. I gave in on Friday when I realized that I wanted to write what will be my second post "A Former Republican Against Bush." Unlike the 18th century, one can't publish a broadside and hang it in the town square. This is the best way of getting ideas out in the 21st century, though I'm afraid that sheer volume decreases the ability to get one's ideas a hearing. Oh well. Here goes.

Well, I don't think I influenced any national debates.

Blogging was so 2004.  Go back to that year and look at the posts and every one had many comments and discussions that would last for days.  Eventually I connected with other bloggers, some of whom I already knew and many whom I did not.  Over that first year or two, we would read and comment on each other's posts.  We'd link to each other's posts often.  And one thing I really enjoyed was the conversations that would start on one blog and instead of writing a really lengthy comment, a person would post on their own blog and there'd be these multi-layered discussions that one would have to follow in multiple places.

The best of those discussions was around the Indian Ocean Tsunami which occurred that December and led to discussions about God and atheism.  Here is my first long post as part of that conversation.

Back when blogging was at its height, I made connections with new people and, in some cases, for years we read each other's stuff and commented on it, without meeting.  There is still one person that I have that relationship with, VeganTrav, though we mainly connect through Goodreads and books we read (he hasn't commented on a MyQuest blog post in a while).

Blogging also made me a new circle of friends whom I got to know outside of blogging.  Through mutual friends (mostly Tim Youmans) and collegiate and ministry connections, I got to know Greg Horton, Micah McCarty, Kristen Henson McCarty, Jennifer Owens, and others.  While still living in Dallas, this Oklahoma City-centered group became a new circle of friends and were one of the groups to whom I was out when I was still in the closet back in Dallas.  They were a significant part of that period of transition and were good friends when I first was back in OKC.  For a while we became the Wendell Berry Society of Greater Oklahoma City.

One time I was visiting Mom in OKC and the McCartys were coming to pick me up so we could go to dinner.  And Mom was puzzled that I was friends with them, but had never met them in person.  It was such a new world. 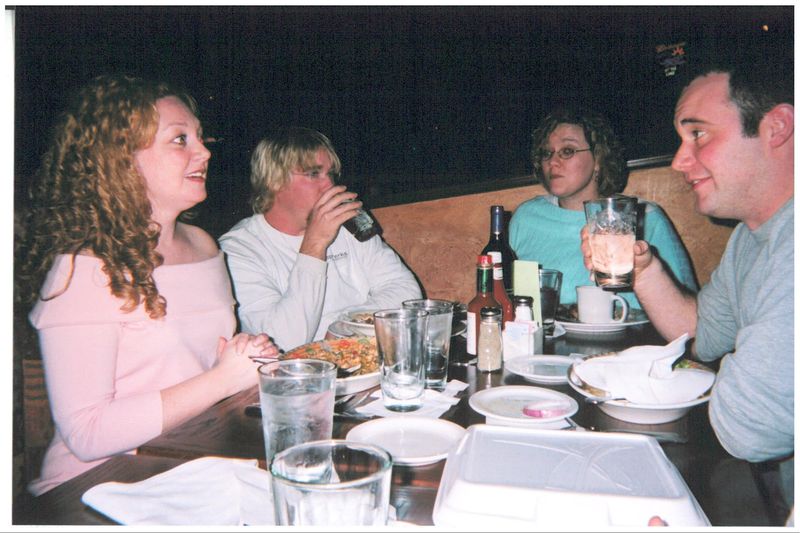 Not that it was all fun and games.  I made mistakes.  When it was new, one church really struggled to comprehend what I was doing, even if it was on my own time.  And I've always felt limitations on what I could say and how I could say it because of my calling.

The most popular moment in the blog's history was in the summer of 2005 when I was writing my coming out story, and the blog received over 1,000 hits a day.

Once the golden age of blogging passed, I at times contemplated ending MyQuest, but there were always readers and people who said they wanted me to continue.  My audience got ever smaller, but remained okay.  Only in the last four years has it dwindled to a very few.  Only when I post a link on Facebook do I get a decent audience.

But now I continue for mostly personal reasons.

So, now I blog mostly for me.

Behind in my blogging

I still intend to post some excerpts from Augustine's The City of God and discuss them.  My review of Gravity.  Our experience at the Marilyn Maye concert on Sunday.  Plus I want to write some pieces for our Wannabe Dad's blog.  I just haven't found the time this weekend!

I had a number of things I wanted to blog about today, but no time.  And now that the time is available, I want to go to bed, read a little Galsworthy, and go to sleep.

Today the Typepad stats showed that my average daily page views has dropped below 100.  This is a first since the very earliest days of this blog in 2004 (though pretty quickly it rose above that, back when a lot of google searches sent people to my blog due to my first post "A Former Republican Against Bush").

For over a year the average really has been less than 100, but the early days when there was quite a regular audience ("blogging was so 2004")  or the days when I was coming out publicly in 2005 and hit over 1,000 readers a day, kept the daily average aloft.  Occassionally in the last year I've hit over 200 views in a day, but only when I've linked to something from my Facebook.  I get happy when I get 120 or 150.

Of course I've have chances to promote the blog and increase its readership.  I could have listed the url in my Oklahoma Gazette by-line, as many other writers did.  Or I could promote it to congregants, which I've never really done.  Partly this was because after the early days of blogging and some mistakes I made, I've generally enjoyed it not having an incredibly wide readership and, instead, remaining a place where I can generally say what I want in a small circle of friends and regular readers.  Of course Facebook seriously cut into blog readership.

I do get envious sometimes when I see the readership and continuing commenting and conversation (which used to happen here) on Greg Horton's blog, for instance.  I think my writing should spur the kind of conversation that his does.  Of course in 2004 there was a whole blog circle of us where the conversations spread over each other's posts -- then we became friends in real life.

In the late Aughts I occassionally toyed with closing this down, but handfuls of you encouraged me not to.  Plus, I still have fun with it, and believe it has given me a place to refine my writing.  I still think these things.

So, MyQuest continues now in its eighth year and will keep on as long as it remains fun.

My work laptop, the computer I use regularly, is in the shop again, so that will seriously inhibit my blogging for the time being.  I'm using Michael computer as I can.

So, what are the big issues concerning you right now?

No time to blog

This week I simply have not had the time to blog, or keep up with various blogs and websites I read.  Maybe over the weekend I can catch up.

From 2004-2006 I had the gray and brown design.  Then I wanted more colour, so I had the gold and yellow design until just today.  Way too long.  I had planned to change it for some time.  I wanted to go to something simpler, cleaner.  What do you think of the new design?  Is there something you really don't like or that isn't working for you?